Is EVERYONE onyx now?

I have seen Masters play like this too. I have no idea how they made it. They play bad on horde too.

Kind of wish they’d just take ranking out seeming how no one ever likes it. Even in gears 4 people did nothing but complain. Just bring back normal levels, wings, and have good matchmaking on the back end

you have to consider people that going on ‘‘solo’’ in ranked and not being carried by a 4 stack or a 5stack so I guess these players have the better or the worse no matter their personal skills but the luck of finding a good random team to play with and the luck to not find a 5 stack lancers spammer.

All you see now, are people that are carried and not have real skills, I’ve seen many people exposing their chest or give the back while feeling secure that someone covering their ■■■■■ with a coordinated cross-fire is right there for them.

“Because I like to pretend I’m making money off gaming cuz I’m a pro, I have to be the best”

Video games are for fun. There can be a competitive game. That’s fine. But the way gears 5 went down and the way it performs and the low population count, doesn’t rlly work.

Example being the ranked matchmaking matches you with bronzes when you’re a gold ect…then what’s the point?

The whole mindset of this stuff dumb. I love a competitive match here and there for sure. It’s fun. But ppl get so wrapped up in it it’s pathetic.

Some games are even worse like apex and cod. Such insane strict matchmaking with no way of playing a casual match. So you’re going against players exactly like you or better. Total sweat lords. Gets old. Gears actually does it slightly better because it has to with low pop counts. And it’s got player matches and custom stuff.

Wish they would add more progression type stuff. Unlockables through reups tons of stuff. The TOD is too short. I have more coins than I know what to do with.

Would rather ditch a stupid pointless badge next to my GT only in said ranked mode, and it gets reset.

Just because you can bounce doesn’t mean you are good. They took off the assist so there is nothing to complain about.

Nope after the last update I straight up refuse to play ranked anything so I’m just a horde player for the moment and even that has been scares lately.

Don’t underestimate me. I’ll always find something to complain about.

Well thats the one universal constant on the internet

If anything I earned my placement. Sure I had awful games where I just couldn’t get it together and lost as a result but there were games were I did my best and it showed. I am not a great VS player but ill never expect to be carried and will always do what I can to help the team rather than sit back and be carried to the next rank.

Having said this system has allowed players I have seen first hand who look like they never touched Gears to rank up which is a bit disheartening to be honest.

Yeah…I get to diamond and ■■■■ hits the fan. I’ve played against great masters and really bad masters.

I can see that

I used to be diamond and master and now I just sit around in silver 3.

If onyx is the new gold then silver 3 is just my own pit of despair.

Same’ish… I used to hit Master / D3… If I didn’t put my best in a losing game I knew the penalty would be severe in Masters. So I put my best in every game, win or lose.
Now, O2 furever! Will never be a D1, don’t even care anymore.

What this new ranking system did is pathetic for the regular gamer… I used to play with buddies that started competitive gaming with gow. And I’d a ton of fun - sure we’d lose a lot some nights… I’d yell - smoke - and suddenly two of my buddies will have their heads in a cloud of smoke. They knew they have to smoke without aiming, they just hit the cover every single time.

Now… they know the penalty for losing once past silver is atrocious - my own skills can’t compensate for a score capped at 1050.

Even though ranks don’t mean much in real life, we’ve stopped playing ranked together.

TC took the feedback of all the complainers here and said - here you go - it’s clear how you rank up. But now you don’t want to play with friends with a huge skill gap. You will think you are carrying them too much or they feel bad for dragging you down too much…

I don’t mind the 1500GP the winning team gets - The cap is ■■■■■■■ stupid. The cap is ■■■■■■■ artificial. What the ■■■■ is 60 kills in a game of KOTH. Do they even know 8 out of 10 people would have crossed 60 in a highly competitive game. Does the losing team really deserve negative gp. Whoever thinks, this game is rewarding participation - has the concept totally inverted. It punishes everyone that is not a team of 5 coordinated lancers firing. And no, no amount of lancer tweaking will fix this.

Get rid of the Ranked mode, Punish quitters, Consolidate the player base around modes people want to play. Find interesting ways to rewards players for playing, better rewards for playing better and great rewards for winning.

TC would have done so much better had they focused their core on matchmaking and skill tracking in the backend. Match players within a reasonable ping and skill band and everyone will stop complaining about lancer tuning and ■■■■… Then everyone will be playing the same game… It’s ■■■■■■■ insane the way the gun works changes based on mode… Who has time for this ■■■■ anymore? What serious gamer or casual gamer is going to figure out 5 different levels of magnetism. Guide really new players to playing AI. And mix the rest.

I play very little anymore. I hop on once or twice every few weeks for a few matches, so I’m sure this contributes to my status in silver. That being said, while I don’t understand the new ranking system that well, just from the feel of my placement speed I’d probably locked up in Onyx as you’ve all mentioned here.

Not sure what it is about Gears 5 but it just doesn’t draw my attention as much the way Gears 4 did. I don’t have as much fun playing solo KOTH as I did in Gears 4. I could hop on for a few hours and run some games, a lot of times it was a devastatingly bad match as random queue tends to go, but I could still snatch MVP and maintain rank until finally getting a win and boosting forward.

Could have been me typing there mate.

I started playing Versus on Gears 5 around Xmas of last year up until recently . Through the different ranking systems and updates and so forth . It just hit me one night after a few hours of matches that I’m just totally tired of this game. Lack of maps and playing the same maps 3 out of 4 matches, the sponging and net code issues have taken their toll. Ranking up (currently Onyx 2) lost all of its motivation. This game feels dead as a doornail and I’m guessing a good chunk of the community has left as well. 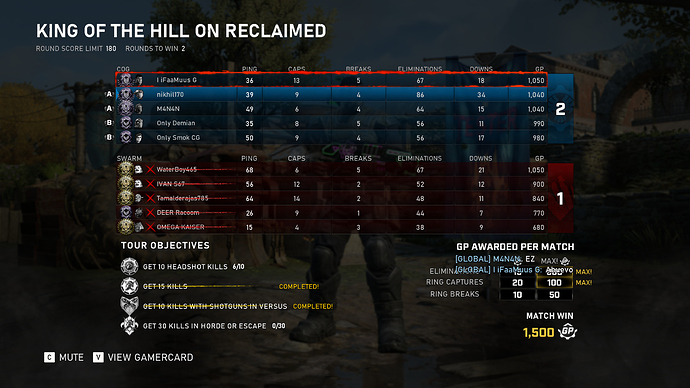 This was a competitive game. I’m not the MVP, don’t really care… But… I got less points out of it than I’d have in any ranked system before the current one.

Had I paused and tried to score the extra break and paid attention to rank points, our team could have lost…