Insane skills of some players!

As advised by some people here I read several threads and watched a lot of videos on YT. I recognized some names from this forum and holy cow, these people have insane skills!

I tried escape with 3 people and some maps were easier and some very hard. I can’t imagine doing it all by myself!
Was there a specific reward for doing it alone?

Was there a specific reward for doing it alone?

People really just did it to challenge themselves. Outside of a community organized challenge to solo master all the Escape hives with all the classes, no rewards were ever handed out for any Master solos(and the aforementioned case was not planned, the reward was handed out post-completion of the effort).

And not all Escape hives are equal. Some are much more difficult than others, say The Line or The Onslaught(if you’re trying to fight rather than speedrun act 2) are in no way comparable in difficulty to The Labyrinth or The Wanderer.

names from this forum and holy cow, these people have insane skills!

Well, my applause to them!

PvP players are in a league of their own. I haven’t touched PvP since Gears 4. I’m sure there are many highly skilled PvP players. But at the moment I’m more interested in pve

Thanks for the ping, hope our videos were able to provide some help or inspire you to Master them all by yourselves as well.

As @AmicableWall421 mentioned, it all started with an organized community challenge, the results of which you can find here:

You’ve read that correctly, every single hive up to this point (end of OP 7) has been Mastered Solo with every single class available up until this point. For those who have missed the origin of this “community challenge”, we started back in April: It took us a total of 104 days to collect and finish all the runs and it was a massive journey! The entire organization took place in the Discord I created here: A full list of hives with a couple statistics can be found here in this Excel …

We did however get a small reward for this challenge, but it was rather “unofficial” and also unexpected.

For some of us, running those Escape hives “normally” was too boring and with OP7 coming along, the majority of classes have been buffed making it way easier to complete them. It turned out that quite a bunch of people were interested in those runs and some of them (even if they were painful cough The Split - Protector cough) were actually very interesting to complete. A hive like The Hunters or Melee Brawl turned out to be WAY harder than we anticipated with some of the strongest classes like Marksman even.

Most of us are still somewhat lurking around the forums so if you ever have any questions about Escape, I’m sure there will be some answers popping in.

There’s also some similar challenges running for Horde but those have been stagnating a bit. I myself am not really playing Gears 5 anymore at this point and I believe that’s also the case for some of the others.

That’s great!
I’ll definitely check out the other thread and more vids.

Enemies tend to be more aggressive and will push you more.

The enemies’ attention will be focused on you alone as there’s obviously no one else to draw fire.

You only have one choice of class, whereas a team has up to three different classes and skillsets. You often end up having to use general core skills and unoptimised weapons just to gain an advantage. For example using active EMBAR shots to stun enemies becomes more important.

This Escape challenge was insane. Some of the videos are very entertaining though.

And as you’ve noticed, some hives are definitely harder than others. The Split and The Surge are probably the hardest ones. But also some hives which are relatively easy as a team become disproportionately harder when solo.

Great Defensor & CommanderCH have some crazy videos! I believe one of them did every Escape hive with every class solo on Master difficulty.

I have already mastered all Escape hives with randoms. I find it easier to try to Master the daily hive as many players want to play that hive on that day (same for Horde). Usually, I try to find a Master lobby for the daily hive and join it, or create a lobby myself and hope people would join (and people do join!). I was using Brawler class for almost all hives because I think it’s the most powerful & requires no ammo (My build is: Damage Dash, Inner Fire, All the Glory, Torch Tackle, and Perk Up"). For The Gatekeepers, I used Nomad and utilized the Lancer that you get at the start. The Split was the most difficult with Guardians; I used Marksman (to snipe with the ultimate before opening some doors) and one of the randoms was Tactician (to utilize the Salvos).

There’s no specific achievement for doing it solo, but I read somewhere that the achievement “Brought a Knife to a Gunfight” (Complete an Escape Hive without firing a shot on Master Difficulty) requires that none of the players fire any shot or grenade, and so it might be more convenient to do it solo. I did it solo using Brawler class on “The Clock” (I believe), and it wasn’t hard to do.

Thanks for the feedback!

None of my classes are maxed out yet. I’m working on Anchor and Nomad right now. Im fairly new to gears 5 and Escape in general but I like a good challenge.

Thank you for the kind words. Thats an excellent list of people there. Theres people that don’t make videos that are also very good that are the forums as well.

Was there a specific reward for doing it alone

I started doing solos simply to challenge myself and to also show people the power that Lahni/Blademaster had. Only 4 people have beaten all 31 unique hives under the old ironman conditions(with proof) and im proud to be among them. Later on though when Commanderch’s challenge was completed the, at the time, Community manager Shauny went out of his way to give all the participants the Full Legacy Toxic set and a few Lancer skins from previous Escape rewards. Im extremely grateful for him. 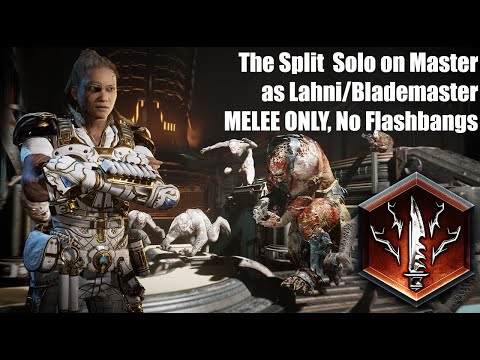 Attempt something like this and tell me it doesn’t take skill.

Wow, that’s extremely nice of him! Is he a community manager here on this forum?

, that’s extremely nice of him! Is he a community manager here on this forum?

He was the Community Manager for The Coalition, as a whole, he would be here, twitter and reddit answering people’s questions and spreading news of the game. He unfortunately doesn’t work there anymore.

If you died solo, or your whole team died, you were sent back to the lobby.

If you died solo, or your whole team died, you were sent back to the lobby.

Dang it, that’s harsh. So it was changed after OP4? Guess people complained?

It was changed at some point in OP5. I dont remember if it was when it launched or shortly after, its been awhile.

Yes, but I think their complaints were warranted. I dont think it was because of the fact you were sent back to the lobby but it was the fact that you had to sit through like 2+ minutes of cutscenes and a loading screen everytime you load into a hive. I prefer the old ironman because it promoted having that perfect run but I can understand im in the minority with that opinion.

Bots are either not shooting or shooting pieces of wall. Let’s not forget there’s options to use superpowers now

Bots are either not shooting

All the enemies are supposed to be shooting 100% of the time? This happens in versus right?

If an enemy is shooting they are shooting where you are, keeping you pinned down. Kinda like how someone in versus would play if they know where you are.

Let’s not forget there’s options to use superpowers now

You dont play Escape and it shows.