I guess i can stop playing now

I posted a couple of thread here and there since the release of the game, did some analysis and a few things in versus and had talk about things that could be done, etc …
I tried to love the game, it wasn’t that bad, i somewhat enjoyed playing the game despite how hard it was to find games, and despite playing mostly against begginers (not that interesting for someone competing in Gears 4 Pro Circuit and a lot of Gears Lans since Gow 1), but still it was ok.

I expected that with the rank reset and the matchmaking update, more people would play again, some people would come back. But it wasn’t true, it was already very boring and hard for me to constantly play against unexperienced players before the update, but lately (after the matchmaking update), i couldn’t find any games in Escalation or Execution … I can’t justify playing this game against bots after 13 years of only playing in ranked or in custom against the other top players of the region. I never touched horde, campaign or escape in this game and don’t plan to, but if i can’t find games anymore i guess i can now “officialy” call the game dead and stop playing.

It’s sad since some of my friends that are playing Starcraft or such kind of game aggree with me that when a new game of our beloved franchise is released we basically don’t care about the changes of the game, of new maps, new weapons, new anything, the only thing we want is other people to play the same game as us, and that the game lives, now Gears 5 seems in worse shape that Gears 4 in early 2019, there is basically no point to play versus in Gears 5. I don’t plan to go back to Gears 4 either, i guess i will just play all those games i ddin’t purchased last months now that it’s raining and snowing most days for months.
(also most of us can aggree that the changes of gameplay are mostly on the “worse” side of the spectrum too so …)

Edit : And hear me out, i really tried to like the game, most of the people i have on my friend list are or where gears players, and most people i know on xbox, i knew them through gears, for me stopping to play gears, will just mean that i abandon the xbox again, and just “lose” contact to all those people. (Not that it was mostly and partially already done since most of them stopped playing the game already, a lot of not so old gears pros, and most people playing mostly ranked, basically only the ones aiming fro the Gears 5 pro circuit are left and even among those most of them don’t play the game that much compared to older gearsn where we could see eachother all day at any hour of the day on gears.

Game is far from dead. Peace out.

The game is pretty much dead here in Europe… 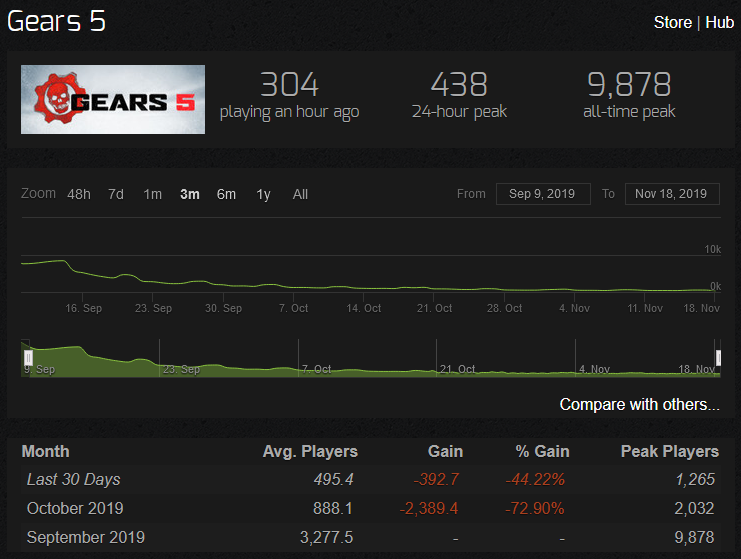 This says it all.

Far from dead ?
Tell me how far we are if it’s been a month i couldn’t find a Ranked Execution, and it’s been like 10 days that i actively try to find an Ranked Escalation every couple of days, and can’t in over 30 mins queue every time.
And i’m talking about peak hours 19h-23h.

What’s your region? I have no issues finding full lobbies in any mode. I’m in the US East Coast.

Is that steam? I mean sure there’s a drop, but they account for such a small percentage.

Shame on you. I’m going to flag this post for being incorrect hurtful:

You should sell whatever you’re on, bet you’d make a lot

On EU, sure it was always worse than NA, but still … there wasnt issues on other gears to find games even years after release, but here its already too late.
Also, sure i want to play Execution and Escalation, gametypes with less people than most others, but thats what i enjoy playing and thus thats why i leave the game

Sorry bro. Hopefully things improve in Phase 3 of the matchmaking update and also Operation 2. I’m praying for you.

Play arcade. It’s fun. In fact I would be interested in a ranked arcade. It would have to be single pick hero, but I would be fine with that.

Hey best of luck for the future. Forget the negative comments, everyone’s clearly in denial. We all know the game isn’t doing the best right now.

Recently I’ve been playing gears 3 if u want to give that a try via the game pass? Tbh it’s laggy as hell if ur not host but it’s a lot more fun. Love how I’m using the chainsaw a lot more now, playing as Marcus fenix. Yes call me a noob if u want lol

Sadly all other gears games via the game pass I couldn’t find a game. I didn’t bother trying judgment based on other people’s comments

Yeah escalation and execution are really slow with matchmaking-it’s basically Koth or tdm at times-even guardian can be hard to get a game on ranked at times. I don’t think the game will die because there are a lot of hardcore fans who will keep playing it. I’m on a quick break to play death stranding but once it’s done I will be straight back on gears 5 ranked pvp. I understand people being disappointed and calling it a day especially with some of the problems on 5 but I personally accept gears of war will never be the same after the original trilogy ended. I’m just happy the franchise is continuing but I hope that TC can start to stop the bleed of players walking away.

Is Steam yes, and 10k users is not a negligible amount, and could have been much higher the following days/weeks if the game had been what many expected.

By the way, another indication of low sales is to see that they have cut the price of the game to less than half.
And it’s only been 2 months since it came out.
Does anyone remember when Gears 4 got a discount like that?

If they remove aim assist on precision weapons then those characters would be balanced.

The definition of “all” is pretty fluid around here.