How to get diamond skins in Season 4?

I’m so confused about this. I’ve been reading articles, and watching videos on Youtube; but it’s still unclear to me. I’d be very interested in getting the Diamond Gnasher. In the other seasons, you had to get to the Diamond rank in a specific core gametype, but what about now ?

From my understanding, if I get the Diamond rank in any core gametype, I get the 5 diamond weapons right away ? Is that it ? It seems so simple, Im not sure I understood correctly.

“This Season, we’ll be making the system simpler by offering Rewards Skins for 5 weapons based on your overall highest Skill Placement. In Season 4, that skin set includes the Gnasher, Markza Mk.1, Longshot, Boltok and Snub!”, from the May 17th “What’s up” article.

Myabe it is because english is NOT my native language, but it feels so unclear to me. Could anybody explain this to me properly ? Please; so I know what I actually have to do in order to get the skin I want.

Thanks in advance for your answers ^-^

Just achieve ANY rank in ANY playlist be it competitive or core and you will earn those 5 weapon skins attached to the highest skill rank you have got.

Let’s say you get diamond in Koth, you will earn all those 5 diamond skins for all those weapons that are listed plus the skins attached to the lower ranks also, be it onyx, gold, silver and bronze also.
It is THAT simple.

Why is the lancer missing from that list? Seems like quite the oversight to leave out one of the most used and iconic weapons…

Woo, really ? Lol so I understand the reactions of people saying they’re not that “precious” anymore. I couldn’t imagine if would be THAT simple as you said.

Dudes, thanks so much for your answer. And the fact that you gave an example made it even easier for me to understand. So I actually understood it, but wasn’t sure 'cause it felt too “easy”.

Thanks again, see ya around ^-^

PS ; I couldn’t answer yesterday because of the new limitations, so I do it now.

Don’t worry, you can have the Diamond Lancer in 10 months

Sounds like a good reward to try your hardest every match

Don’t worry, you can have the Diamond Lancer in 10 months

Still targeting Onyx, which I believe is my skill level, but the above factors are making it very hard

Never say never bro you might get diamond if you try. If I can do it then you can also. I absolutely suck at wall bouncing,using embrar/longshot and I play solo.

Yeah we tried multiple Ranked Matches… I was so surprised seing teamates with such negative scores like “6 kills/12 deaths” and so on… Also, the ping was all over the place. I always have around 30 of ping, but this time… I had a solid 150 and all the people in the lobby had the same, or worse. After a few matches, my teamate gave up so… yeah.

Maybe I should recruit for a team, but I live in Europe and the playerbase is so low now.

Anyone know the rotations for the diamond skins in season 3 ??and when are the rewards handed out

Continuing the discussion from All things Diamond for S3 and S4 will be announced next week: 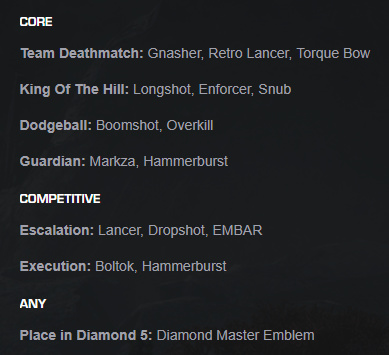 And no we don’t know when they roll out, but they may announce it today on the What’s Up post (in 1-2 hours)

Edit: didn’t announce it again lol. Prolly first or second week of July if I had to guess.