How can you be Onyx in KOTH and not know how to play?

Omfg… how the f can people get to onyx2/onyx3 in KOTH and not understand how to win in that game mode??

I had multiple games last night where I was just… stunned… by my team mates… and their apparent lack of any knowledge of what it takes to win . I’m not talking about randoms… I’m talking about LFG team mates, mostly Onyx…

Last night really depressed me, re the state of this game and its player pool. I love the game, and I love the challenge of getting better and higher ranked, but I’m seeing a huge downside to that too… The better you are the better your team mates need to be, to win against the better opponents… And the more frustrating it is, when you lose because your team mates don’t appear to know what they are doing… Strategically, that is. They might be getting a lot of kills, but they are not really helping to win the game…

I’d give up on the game all together, but sometimes I get games which are just BRILLIANT and so enjoyable, I can’t leave…

This game, every one of my team mates was 100% on the ball, it was like clockwork, I found there was very little for me to do, other than get out of their way, setup, and support my team mates with spotting and cross. it was freaking awesome - I under performed but given the amazing company I was with, I didn’t mind… Reminded me of some of the awesome games with @Krylon_Blue and @Metal_Gear_Mo 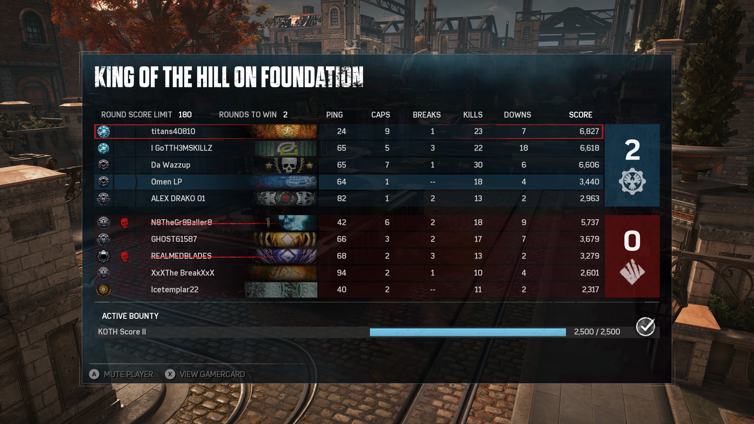 But these games are rare… And in all fairness, this was unbalanced (i was in a 4 person squad, Wazzup was a random not in the party).

I wonder the exact same thing you do.

I have to accept more randoms on my team whenever I might actually get a game (usually TDM now) - and the experience is just as bad.

People just don’t play with co-ordination or sense of tactical play to be in Onyx.

And it’s probably the same ones asking why they aren’t Diamond yet.

They MVP 20 time in a row and beat D5 stacks - no screenshots to prove it though.

Cant judge a player off of 1 game bro

Joined my buddy for some matches last night and most of his group had me wondering the same thing. I finished 3rd on our team but I wasn’t always going for the objective points

The enemy team was crossing but the majority of my team preferred to use Gnasher. Onyx players attempting to break into Diamond need to realize it’s not a one dimensional game in the higher tiers or they’ll get wrecked. I lost 15% on my rank because they wanted to play in a squad but act like randoms. Needless to say, I don’t think I’ll be teaming with that team again.

If I do play KOTH on that rare occasion,

The amount of times I see people go in single handed with a Gnasher against 3-5 people and get bodied is just too many.

Hang back, wait for teammates, push together smartly.

Going in one at a time normally costs you rounds and matches.

Especially if you lock down spawn points and so you control where the respawn will be.

At OP
Point 5 always winds me up, you should be running to next ring when current countdown hits 10 at the latest, unless you are closing out the win of course.

I’m in a terrible rut at the moment, game after game I’m getting beat. I usually (not always) place top 2 on team be it win or lose, however this last couple of weeks I’m either unlucky with team mates, esp AFK or high ping warriors or and I have to hold my hand up here and say I’m playing trash, Taken me from Gold 3 to Gold 1 .

I keep, keeping on but I would like a victory now and again. In the words of Dr Evil, “Throw me a frickin bone, here !”

I am trying to get Dodgeball games, just to mix it up, but no one is playing, I am unranked in this mode.

Curious how did a no ranked (REALMEDBLADES) get in a game of diamond, onyx and gold? looks like he was holding his own.

Can you explain how to control or lock down the spawn point. I think this is a part of KOTH i am still missing.

sorry i do not understand.

He’s talking about the unranked player you mentioned. It’s most likely a secondary account they’re playing on and they were most likely invited by one of the players on the team.

I ended up in a 5 person team, which had a couple of the guys from the above game (titans and alex) , so we had 2 diamonds and 3 onyx in a full squad… Couldn’t find a game… We kept trying… I ended up going to bed (it was 2am), but I guess we were too highly ranked, as a team, given the time, etc, etc… Run afault of the new MM rules…

p.s. I FORGOT another rant point: None of my team mates have sticks which click in… that’s why they can’t mark anyone…

p.s. I FORGOT another rant point: None of my team mates have sticks which click in… that’s why they can’t mark anyone…

That’s what it is!

We need to start a GoFundMe for these folks.

This isn’t something I really do yet, but the idea is: the enemy team is likely to spawn close to the ring, to give them a chance to break it, if you have it capped. BUT they won’t spawn close to you or your team mate… So if you know where the spawn points are, if you have a team mate there, that spawn point is ‘blocked’ and enemies will spawn further away.

One example, checkout: when the ring is out in the open, next to the platform, on either side : enemies can spawn behind the ring, very close to it, UNLESS you have a team mate back there, blocking it. that’s a great place to lancer from too - it means enemies cannot spawn close to the ring, and it means your team mates are likely to spawn there, close to the ring.

Because it really doesnt matter until you get to Onyx. You can play Gnashers only up until Onyx. I did it and had 50-80 kills 20+ caps every match. Now its a different ball game. I just started using Lancer.

Escalation is 50 times worse for this, you don’t even know how bad it is

Dude, I hear you. None of my randoms ever spot. It’s so stupidly easy to do and it helps the team. I don’t understand why everyone doesn’t do it.

TC needs to make autospot a thing when you just aim an at enemy, because there’s not enough incentive for them to do it as is.

Can you explain how to control or lock down the spawn point. I think this is a part of KOTH i am still missing.

You position your yourself in certain points in the map and you can control where your teammates spawn and where the other people spawn.

It depends where the Hill is and is different places for different maps.

Yeah, now imagine for me that’s the case even when I search solo.