Pretty much what it says in the title, put your own impressions of the mode in here.

Played one match so far. Format of 10 waves seems to work for the mode, certainly doesn’t pull any punches right off the bat, though it also depends on spawns.

Taps give the same amount of power as during a 50 wave run from what I can tell which is a bit meh, but not a particular game killer by any means.

Spawns are the biggest thing I would criticize and also say good things about at the same time. For all I can tell they appear to be random so far, throwing either anything from 3-5 bosses/minibosses with Drone Elites or an entire wave full of Shock Trackers and Leeches at you. Or an entire wave of Ice Scions with Palace Guards, at least a dozen Wardens(in total) with Cyclops, wave full of Buzzkills with flame Poppers, you name it. If you don’t have a Demo and/or don’t get Overload as the map, the boss/Scion/Warden(the non miniboss variant) spawn waves will probably be a bit more difficult.

But the spawn patterns are also one of the downsides because no one from TC thought to mention prior to the event going live that it is limited to two enemy types per wave. Big meh on that one.

I’ll hand off the stage to others now.

Wow, only two different enemies for each wave? What a huge thing for them not to mention.

It’s mentioned… in the game only when you go into the Horde selection. But nowhere else from what I can tell.

Oh, and pipe Locust can spawn in it too.

Tried playing twice. Game crashed both times on wave 7. So this will be a hard pass from me.

You’re making the mode sound awesome lol
At work atm so won’t be able to try it out until later.

Modifiers change every match as it seems which is weird why they even show fixed ones in the menu.

I’ve seen three at most.

Roulette Survivor : Complete 3 matches in Advanced or above.

I’d say it’s decent but nothing spectacular if you ask me. Definitely would take this over Boss Rush though. Minus every single Grenadier Elite throwing a frag at nearly the same time as soon as they don’t see you and sometimes it doesn’t even make sense where they land or throw them. 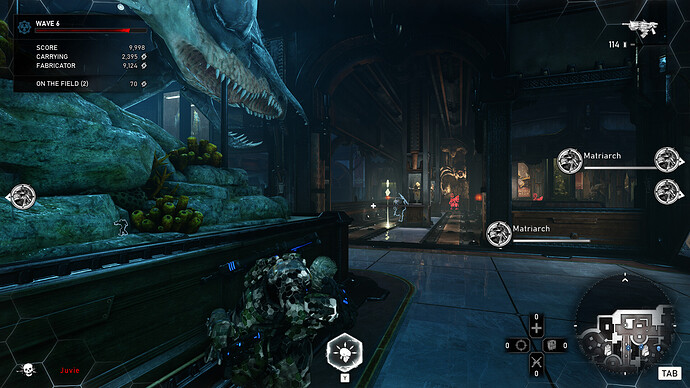 So… for some maps where there seem to only be 4 fixed tap positions (like the Escape tile maps) where does the 5th one appear?

I don’t know, just played Gridlock and had 5 taps on wave 7.

I noticed it’s always the standard ones (even if on the menu it says different ones) with the exception of the Daily, where the daily modifiers are taken. So basically you can get Canals in Horde Roulette and it takes the current daily modifiers.

Also I just had like 10 Guardians on wave 10, what a nightmare lol

So am I. Unleash all the bosses I say, lol