Hey, supposed "people" running gears, we are not the droids you are looking for

You’re game is literally unplayable now. What’s the deal this is honestly embarrassing

Then don’t play it

I can’t that’s what I’m inquiring silly. Can’t get answers if you don’t ask questions

Be more specific, is the game not launching? Is there something wrong in terms of data?

This is beyond anything I’ve ever seen in my life.

And the best part is that it’s only on one server so game to game it’s a coin toss on whether or not I get to play the game.

500 DL speed 23up and I’ve got 360 disconnect games…. People rubber banding cross map weapon pickups available. My game runs normal but everything/one else is trippin hard. Matches not loading properly. Instantly disconnect upon match rejoin… don’t know what it is

I’ve played on a Chilean host

As a Chilean, I would like to know how can you host in Gears 5? The closest server is Brazil where I get 50 ping at best and as far as I know, the game runs on so called dedicated servers which would make a Chilean impossible to host?

I do believe the game runs as bad as you describe, I’m merely inquiring if there is a way I can get host magical powers that I’m not aware of.

No this was in gow3 & J when you could P2P host in private matches. I’d sell my soul for GoW5 to have P2P.

Please don’t complain about “lag”. It doesn’t advantage anyone to your words.

It doesn’t advantage anyone to your words.

I’m not complaining about other people killing me because they’re lagging, because I’m not a moron.

So you are complaining you are killing everyone because of lag?

I’m complaining that I’m unable to kill people at the rate at which I normally do due to lag on two servers, one of which is the worst lag I’ve ever experienced in my life. Video coming.

I thought you believed that the game played fairly?

Lag comp only made it more fair.

Now it isn’t fair for you?

If you can’t kill people at the same rate, aren’t you by definition disadvantaged?

If you can’t kill people at the same rate, aren’t you by definition disadvantaged?

Either way, you’ve argued that lag is a disadvantage for an individual player… Now you are arguing that you are lagging, good connection and all.

You mean something else is deciding the outcome?

Either way, you’ve argued that lag is a disadvantage for an individual player…

I have argued that lagging is a disadvantage, and now I am lagging therefore I am complaining about the fact that I am lagging. No one has ever been more consistent regarding any topic in the whole of human history than I am being right now.

Now you are arguing that you are lagging, good connection and all.

You mean something else is deciding the outcome?

Yes — the servers, specifically US Central South & US East. 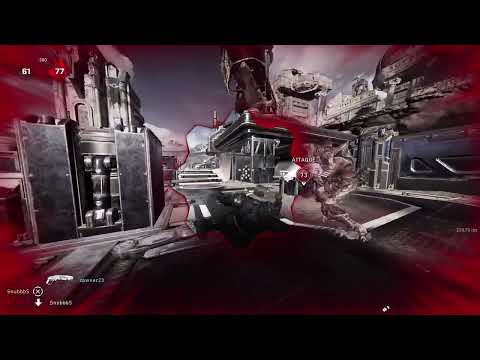 One server is fine, one server is unplayable and one server is a violation of my human rights against “Torture and Other Cruel, Inhuman or Degrading Treatment or Punishment.” as laid out under Article 4 of the UN Human Rights Council.

Same experience but worse. I didn’t actually register damage. I was playing ranked ex so I just pushed to my teammate to sacrifice a boom shot kill lol it just sucks I love this game but what the heck are these people doing?..

Looks completely playable to me

I got booted out of my own private game against bots last night. Gigabit fiber, 1-3ms ping and I spawned with no lancer in my hand.

That lag is so bad in everything I’ve played privately (except campaign) so i’m not about to catch bans because the servers are dropping players out of competitive games.

I literally laughed out loud at your video. One because you were dying due to funky things, and two because your commentary.

Automatic latency balancing, lag comp, whatever you want to call it by definition puts some with good internet at a disadvantage while providing an advantage to some with subpar internet. That’s like the most basic definition. You can be consistent all you want saying lagging is never an advantage, but you are consistently wrong. Anyone who drinks that Kool Aid deserves Rev Jones.

The first video you kill like 4 or 5 in a row. Shots made no sense and even you said “lucky”. Then you said you didn’t get anymore kills. Someone went positive that game. No packet loss for them or what? If everyone was experiencing the same packet loss wouldn’t the higher skill still rise to the top? We don’t see the end scoreboard, and I’m sure you know some of the opponents with such a small community. And how does a guy with over 500ms ping get in a ranked match and play?

Second match ghost shots, no hit registration with lancer, you said you had to put a few more bullets into the enemy? I’ve never seen a game quite that screwy and I play on the same servers. No score, ring count, etc. How hard is it for you to believe occasionally the same thing happens on “normal” server play? You demanded evidence with video because you had never seen such. When provided, the response was, “yeah that was weird”. Packet loss, fluctuating ping, whatever it is, the game plays pure wonky at times.

Yes, the servers are quite screwy. Nothing in the game right now makes sense. I’m just glad you are finally experiencing some of the bs people like me claim happens way too often even without the packet loss symbols.