Has anybody tried making their ping worse to get better performance?

I hit a point today where I’ve checked out from this game. I experienced your same issues all evening and I’ve had enough. I had my lowest ping ever, 12ms, and the movement and hit detection was abysmal. It was at that very moment I knew this game isn’t worth my time. I finished the match and proceeded to leave my friends party behind without much if any notice. I gave up. I’ve checked out.

Gears as we know it is dead. What we have now is nothing short of a tease to what could have been had The Coalition not of wrecked it.

@Krylon_Blue
I’m tapping out as well. my gnasher was so ■■■■■■■ useless today and tonight I ■■■■ you not I said ■■■■ it and quit using it and just tried to chainsaw everybody up close. Which was kinda hilarious. I got way more .cq kills than I ever get w/the gnasher. I was just running around chasing people w/my saw. Its really sad b/c I love this game. But it is making me feel bummed and frustratec that I can’t compete. So I’m taking a break for my sanity. Going to grind Dead cells and finish Remnant. Its no wonder Rod Fergusson left. The game is a joke right now.

For anyone still playing with their ping, try having 80-120 ping and swiping shots past people, as you shoot or after.
This worked excruciatingly well in g4 and when eu was being placed badly worked on g5 as well.

@presc1ence sadly I gave up on the gnasher being fun or fair, and switched to the chainsaw last night for all my cqc. And I had much better results.

no cos when the ping is worse the game is not so good, i need to make my ping better, my ping is in the 100s and it used to be in the 20s -30s range, dont know why its gone high

@ALPHA_OMEGA_o I promise you my man. No you don’t. Don’t ever wish to have ping below 40ms in this game. Ask @Krylon_Blue and @Drinkands_im and @SWEARxMAN. Lol…no you don’t.

Well, technically it is beneficial to have a lower ping in the PvE modes. But for PvP… well, it’s not been the case in neither 5 nor 4, according to the many complaints about how higher ping seems to make it harder to kill someone who has that high ping.

For real, look at what happens when I am between 40-50ms. This doesn’t happen on a below 30ms ping. 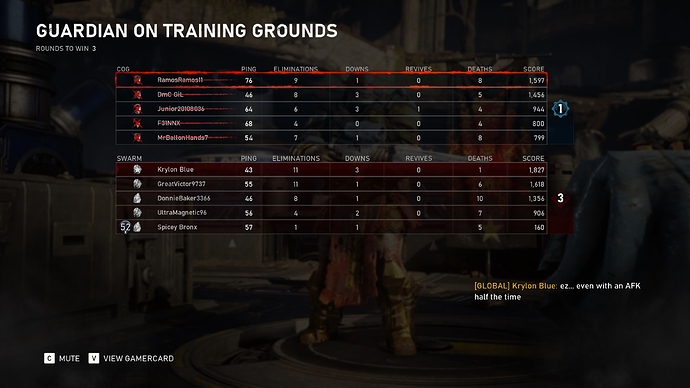 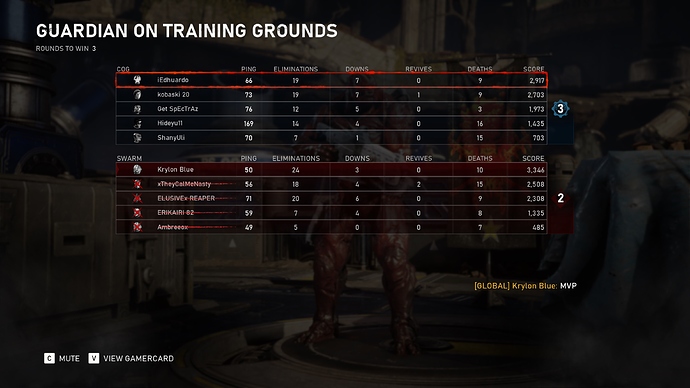 I tried it a couple times went from direct lan to mobile hotspot and I was eating shots and I was killing easier. however, the game is alittle harder to play since players are jumping around and the shots sometimes do not register. Gears 4 and 5 are both dog sheeeitt in my opinion anyways, Almost 13 years and still cant get it right.

@EC_GHOSTST3IN yep. Correct about all that. @krlon_Blue pretty obvious where you need to be playing at…I just played a match back on my mobile hit spot. I probably chainsawed 20 people in a match
I chainsawed 1 guy at least
6 times.

Every match I played today I had a 40ms or so ping and it was great. I had one match with a 15ms and someone on the enemy team was going from 150-1400ms and it felt absolutely terrible.

Anywho, here’s a match where the guy who talked smack to us couldn’t handle my moves. 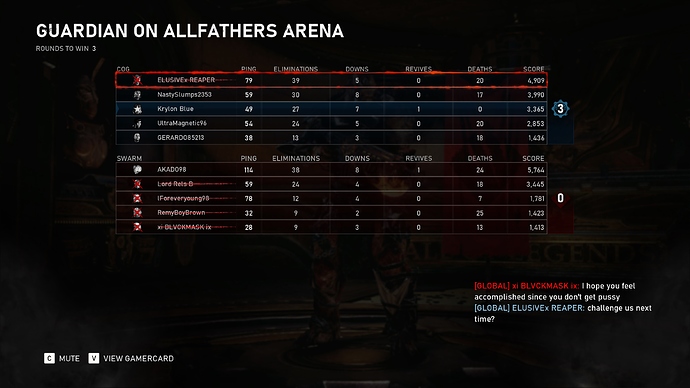 The new Gnasher plus high pings/spike players is unplayable. It’s like Gears 4 all over again when using COMP tuning.

Point blanks with hit markers = 0% when I shoot with a 30ms ping.

Once again, a find outstanding player from a country I will leave unnamed (but you will all know!) was spiking to 1500ms. He got MVP, sponged everything and shot through walls. Grenades exploded with no audio until 2 seconds AFTER the explosion.

I was only trying to explain that is isnt worth it in the long run. I remember the jtag modded lobbies on gears 2 so I sympathize but I was just trying to express that it isnt worth it and when one does figure out how to do these things this game becomes pointless to any normal empathetic person. Just pushing this person to either give it up and move on while also expressing that this type of manipulation ruins the enjoyment of a game so why play at that point? That is what I mean.

I played a match where the whole enemy team was 80ms and above but I was at 15ms. I down the leader but when I try and wrap around the cover I quickly glitch right back into the cover. It didn’t hurt us but this was going on all match and happens every time I have a ping below 30ms and someone is above 80ms.

Edit: The very next game I have a 40-50ish ping and there is absolutely no lag to be seen at all. In fact, I got an easy MVP which happens quite often every time I am not below 30ms. 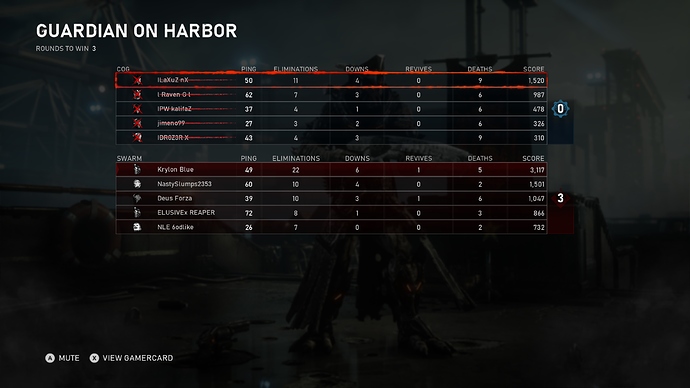 @Krylon_Blue sadly, that’s hilarious. Looks like somebody hit rewind on a vhs tape. Im also amazed that someone spiking up to 1500 ms manages to stay connected. Any idea what causes that rewind effect. Obviously I know ping DISCREPANCIES…but why?

@FUNKDOKTOR
Easy as pie to explain dude. Low pings are untrusted connections according to the gears server. Whilst high pings are trusted like a paragon of virtue.

At this point I’m not even sure what the cause of the issues are. It’s obvious high fluctuation is a major issue but even in lower ping lobbies this game has the potential to play very poorly. My friends and I are seeing that sync icon pop up on the bottom right quite often over the past few days and I’m not even sure why. My connection is stable but everything’s out of sync from shots to character positioning.

I hit my goal of reaching Masters so now I can step back if I wish and allow this mess some time to actually hopefully improve. I have my doubts that it will do anything but get worse though. I’m not going to say I’m never going to play again but my time is going to be cut by a large amount due to the issues. Amazing I could even hit Masters given how poorly this game performs.

Anyways, enjoy the game for what it is if you continue playing daily. That is a broken mess that the developers think runs perfectly fine.

On a side note, all of the Terminator characters need to be removed from ranked play. It’s ridiculous I even need to say this but these characters cause major sponging issues and it’s becoming more obvious every time I play. I get more full pellets spread hit markers on my screen for 0% against them compared to any others.

@presc1ence I know your speaking in a very abbreviated manner…but can you explain this a little more. Are you saying this is how the lag comp software is written…and why would the low ping be “distrusted” so to speak…Why does what we(low ping) see not translate? I thought lag comp was actually supposed to benefit low ping by essentially putting us on a small delay to “match up” pings…am I misunderstanding what lag comp is supposed to do? Just more info if you have it.

Nah your not misunderstanding, it’s just weird how tc seem to use lag comp etc.
Much like the aim assist suite, they just seem to pile on complex solutions on top of complex solutions, when industry proven simpler ones would suffice.

There have been a few mentions that the devs have said the system resolves differences between the two players screens by ‘trusting’ one over the other.
I have no idea of the factors involved in how tc chooses this, but it has popped up a few times that this is weighted towards the higher ping player.

From experience this seems to be heavily biased toward the higher ping player, even when the ping difference is fairly small.

Of course this is all based on fairly unclear information and potentially outright hearsay, but it explains a lot of situations that don’t seem to fall under regular lag comp…expectations. I.E I’ve never seen anything as aggressive as this in any other game.

I’m probably wrong but its not like tc will explain themselves.