Can anyone provide the skill cards for Grace?

I was informed they were mostly melee based but haven’t seen anything detailed. 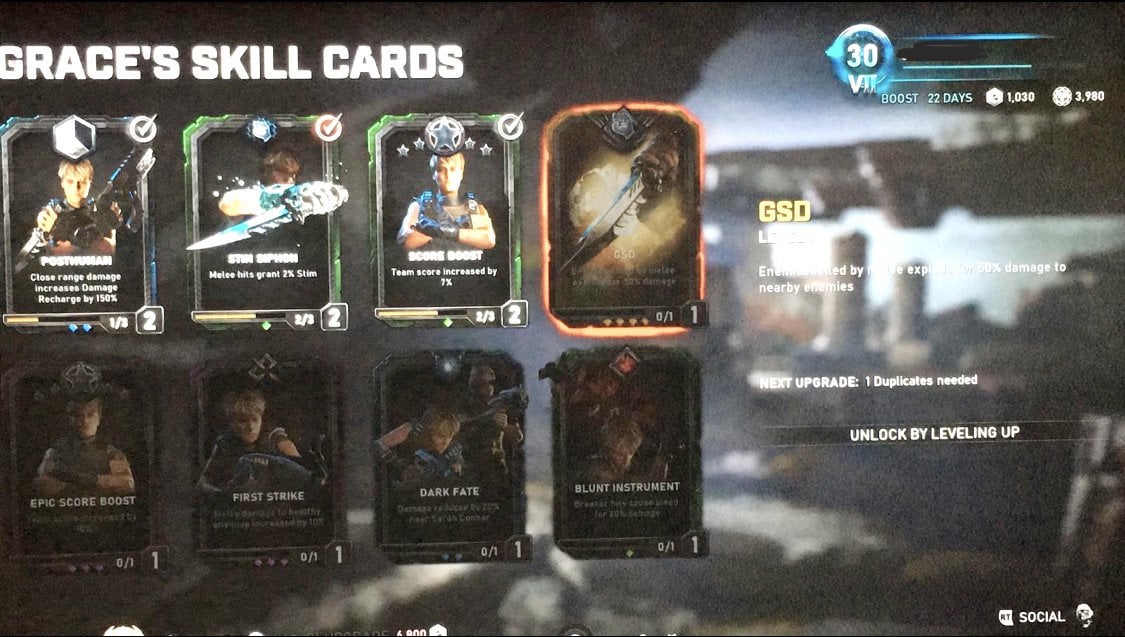 SCORE BOOST Score is boosted by 5%

FIRST STRIKE Melee damage to healthy enemies is increased by 10%

DARK FATE Damage is reduced by 20% near Sarah Connor

Another melee-oriented character. Didn’t they already do this with Emile? Not very interesting and makes me question why she’s even a separate class. Also again she only has 6 real skills because 1/4th of her loadout is taken up by useless Score Boosts…

Those of you saying she’s strong are high. These skills are total garbo for higher difficulty levels on Horde. Good luck getting to melee range when you go down instantly and the game is extremely stingy with giving extra Health.

For Escape, I can see it a little bit. Explosion on melee kill looks pretty decent. But Emile does more Melee damage and has a bleed that applies to both the knife and the mace, and a better Stim card to boot. So at best she is a side-grade to a mediocre Escape character.

i agree. wanting someone to post some video proving otherwise but yah on paper shes not gona be my flavor.

the fact she’s 20 dollars and wont hold up on insane and up difficulties tells me shes a hard pass.

Well I’m at Level 15 with her so I can give my feedback soon for GSD.

You actually bought this paid advertisement?

I’m a fan of Terminators. I was looking for an excuse to go back to a Escape grinding, Horde was much slower progress. When I looked at Store, I noticed Grace was usable in Horde and Escape. I wanted to max out all Escape and Horde characters and cards. So once I max out Grace and COG Gear, I should be Re-up 19+. Plus that Rev-9 looked cooler and sleeker in design than T-1000.

I haven’t played the game yet, so bare with me.

These are characters that can only be bought? Do they have abilities that are, technically speaking, unique to them?

I don’t like when others judge game purchases, since it’s completely subjective. I’m sure if we all saw your bank statement for the month we’d find something for $20 that’s dumb as hell.

I’d agree in general, but the terminator characters are literally advertisements

Been waiting for awhile to see this thread updated while I was leveling grace; couldn’t find YouTube videos demonstrating GSD… but I got there this morning.

Firstly, most points here are valid. She’s a bit underwhelming, however, I had enough fun with her on the run up to 16. The melee stim is good for one hit, so you can go back and forth all day as long as the rhythm is consistent, but it takes too long. It should be buffed (both stim AND melee damage). I ran a quick escape to try out GSD, and it’s whatever… cool, has potential when optimized with her ultimate maybe, but overall, mostly flashy boom boom- the splash damage wasn’t too substantial- again, haven’t really experimented with her (or breaker mace bleeding yet either).

Next though, I must posit that I used her from level 12-15.75 doing only the terminator horde event on insane. While I certainly wasn’t mvp, she survived. I wasn’t out melee fighting though, but I finished more often than not doing fine in the lower midrange… I have no problems being a team player- once you get power weapons, it’s moot. So, she can survive, but don’t expect to hang.

It was easier than all my insane runs lolol. The enemy regen was mitigated by all the bleeding/dps and the fortification increase was pretty much unnoticeable. We did it the “right” way (no barrier glitch/etc). I’m sure they would’ve preferred having a Marcus or something, but I held my own and they didn’t ■■■■■- solid run, there was one or two close calls where I was where I needed to be and came through with a clutch crowd control… could’ve contributed more overall- but that’s a problem with her regardless of difficulty imo. At least I was running 30% more team score!!!

Anyways- point is, I’m a GOW fan, terminator fan, Mackenzie Davis (grace) fan, and a rationale of having more characters is: how many times you join a lobby where “no dupes” allowed?!?!?!?? Mmmmhmmmm

Grace is fun and tanky on experienced or lower, I’m eager to test her out in reg horde/escape now.

How does the Post human card work? does its explanation mean when I melee someone it increases the recharge % of my ulti or something else?

It’s the damage you take.

She’s fun to play overall but I agree about playing with her on Horde in higher difficulties, not sure how that would go since she needs to get up close to be more effective. However she does have the Dark Fate card which boosts her damage resistance when close to Sarah, so it could be beneficial to play with her if Sarah is on your team, depending on your builds.

I mostly play Escape with her, and her ultimate builds up quickly and when she melees enemies she gets stim. I wish she had an extra health card like Mac.

That card makes your Ultimate recharge faster as you take damage up close. It basically makes close range damage more effective at boosting your ultimate meter.

I think they should make it to where Grace can buy the Breaker Mace since it’s one of her skill cards.
I went through all 50 waves and didn’t get a Warden once. I find it frustrating because her cards are centered around melee. She’s a melee specialist.