Gears of War into Fortnite

Considering the Rising popularity of gears of war and the sudden collaboration Fortnite has been doing, it would be a great idea if some of the characters from Gears of War (preferably the Carmines) would be dropped into the game, it would give gears of war a popularity spike and if you play Fortnite, you could drop down and default dance when you get the winner winner victory royale chicken dinner

This is not the case- 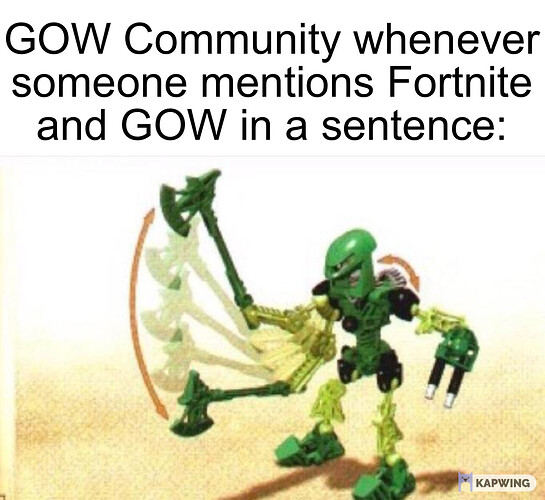 I wanna default dance as Hoffman

Does he have the wheelchair included
Does he roll back and forth for the leg shuffling?

Bringing Gears to Fortnite would be one thing. Bringing Fortnite to Gears is another matter entirely.

Id be ok with gears characters going to fortnite, like who cares? people act like its a bad thing, it would be new players to the series. halo fans (shudder) were freaking out when Chief made it to fortnite and I thought it was dope.

It’s bad enough we have “The New Day” scum in Gears 5 as a result of Crossovers. It just shouldn’t happen anymore and that’s it. End of.

It’s about time this Franchise got back some of that long lost self-respect.

What I don’t get, is the point of trying to make gears more popular. The game is - as we all know - “flawed” and the current support is done by like one intern, we have a skill gap relying on wrap-around shots, abuse of aim assist and the cover system to slide around the map on skates,an average ping of 120+ is common in ranked matches so the amount of players that would stick with this ■■■■■■■■ after trying it out is probably far less than 1%, which I can completely understand.
People aren’t interested and getting kids over from Fortnite won’t change that imo. Once we have a good gears game, I’m all for doing collaborations to get more people in, but we had three million players at launch and are at like 10000 now, so pretending like everything is fine and just trying to get more players, won’t solve the 1000 issues this game has.

Somehow this feels like when namco decided to put geralt as a guest in soulcalibur. Yes he kind of did fit in the game, but it brought in a ■■■■■■■■ of clueless witcher fans spreading their stupidity over an otherwise ok game. So no thanks for cross promotion.

If you put Classic Baird in fortnite I’ll be forced to download fortnite and play it, which means I’ll play a video game that other people play — so I support this idea.

Ah here comes the ol’ Fortnite bad meme except unironically and with no valid argument about why. RIP OP’s inbox

What I don’t get, is the point of trying to make gears more popular

Yeah growing the playerbase is such a bad thing.

did you read what I said after that? sure I’m down for getting more players, but spending money on marketing a bad game won’t help it out. Fixing the game and naturally growing the playerbase would make more sense imo. If you get a person to try gears and they instantly get scared away by the amount of BS there is, they might not wanna try gears 6 for example, even if it ends up being good, because they saw how bad g5 is (in certain situations, modes, and regions).