this game looks more and more like a two SKU/Tile situation where the MP is not integrated into the main Campaign.

built to be a stand alone MP product, Free to Play out of the gate. Gears should follow this and get away from the three year cycle of remaking modes, maps, characters over and over again. A standalone SKU like this can evolve and persist like current live service games for the next 10 years.

this also means a separate studio probably needs to take on a more active role in supporting a MP only game. not having them outright abandon the game and set it on cruise control for three years like we’re getting with Gears 5.

I assume by MP you also include the PvE modes here? But I don’t necessarily see anything speaking against it.

Did they mention if the campaign would be paid for rather than being free like the MP?

Campaign will be a buyable product like normal (also on GamePass)

Hard to say where PvE would fall because a lot of the assets are taken out of the stuff built for Campaign. I could see it staying in the SP suite and I’m actually surprised TC has leaned into Campaign areas as PVE encounters like Destiny does. (Strikes)

Do you think the fans would react well if some skins were behind a paywall?

skins are going to be behind paywalls anyway, playing through the campaign to get skins was in Gears 3 and nobody had a problem with that.

With the exception of BS and CS skins, gears 5 skins are free for the most part. I wouldn’t say they are behind “paywalls” as most cool character skins are super easy to acquire but you have to be on the up and up for new skins so you dont miss out on them.

I recall that, I bought Kait and Ben (CS) back when they were iron.

But I’m not talking about the old store, I’m referring to the new store. I highly doubt they will return to the old system unless they want to face the same issues they did back in early days of 5.

if you want free maps and content the game needs to find a way to pay for that stuff. MTX in a F2P game is fine.

the store doesn’t have to be the same, it just has to be fair.

I don’t think that would be considered “behind a paywall” though…it’s still free, just have to put effort into them.

not sure what you mean by behind a paywall

having to play the Infinite campaign to get a skin or just buying it on the store through the MP side?

By paywall, I mean that the only way to get the skin is through using real money, like the CS/BS skins.

like I said before, you’re getting the paywall anyway Free to play or not. These companies are going to try and get more money and spending $60 upfront doesn’t cancel out egregious MTX strategies.

I’d rather have this different approach to MP when it’s not beholden to a 3 year development cycle where we’re re-acquiring Mechanic Baird a third time because it’s technically a new game. or having to re-make/port Gridlock (a 5th?) again.

This. I think gears 5 only received backlash when it launched (speaking about the SKINS) because people were like “I already paid $60, take this Fortnite-system of paid skins out of the game I already paid fooor”.

I would welcome some premium skins if that TRULLY meant More Content More Often.

Plus, with the current ToD you would still get one free skin per season, just pick your favorite per Operation

And of course, if the standalone isn’t called “Gears 6 multi-player” but rather “Gears multi-player” or something like that, with constant updates not tied to a game.

this looking back at you after paying $60-$100 on this game was a real sore point. these are F2P prices in a paid game. 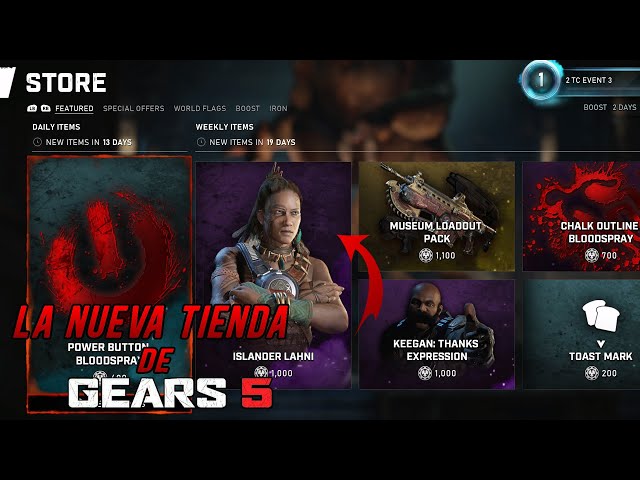 I’ve been using the same anniversary bloodspray TC gave us

It’s the COG tags one, I’m not sure why they thought blood sprays were something we would be hyped about. I actually sorta like marks because they are more unique and they show up besides our GTs in lobbies.

we have wanted this for a long time and it is very much overdue. pains me to think about all the maps, skins, characters and whatnot that keep getting left behind instead of built on. for example, every gears game we are “excited” for returning content over and over again.

built to be a stand alone MP product, Free to Play out of the gate

Most ppl overlook this, but whenever there’s a free multiplayer like this, it basically gives cheaters free reign. Any game that offers this or a version of it (destiny 2, COD, etc), it almost guarantees the game will be overrun with cheating.

Im willing to bet infinite will have its own cheater problems since it’s going to make it easy for anyone to create a new free account to play on as soon as their last throwaway account gets banned.

I just wish all these devs put in a good auto detect system to ban these cheaters the moment they try to inject any kind of code or alter any file/data or whatever. The “report” feature just doesn’t cut it anymore and games need a strong anti cheat to deter free to play cheating.

TC should follow in 343’s footsteps especially if it means that with a price point of 0 we get more people trying out Gears 6’s multiplayer and hopefully staying. It would have microtransactions but Gears 4 & 5 already have them and they were both full priced games so not much will change. I can forsee the exclusive period of skins might become more than 1 week but that isn’t too big a deal.

Imagine a ten year plan Gears game with basically every map from the series being playable on Horde & Versus. All of the characters which have been requested being in the same game as well as no longer having to reunlock Anthony Carmine for the 6th time.

It would also mean that people who don’t care about the story don’t have to pay for a portion of the game they never play.