Gears 5 To Include Mouse/Keyboard On Xbox One 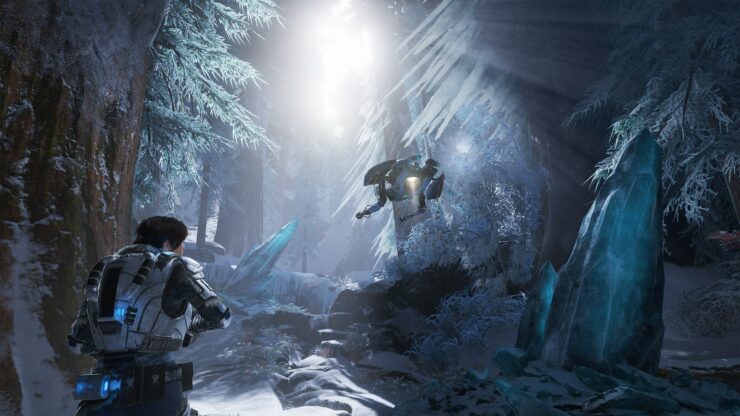 Mentioned before and I think it’s a good move.

It’s the future. And, it will lessen excuses.

“Unfair” to who? Everyone will be able to use it so who is being victimized here? If it’s a big advantage in Gears everyone will use it. I predict most won’t though because it’s really clunky and not as smooth in gnasher fights (which is the most fun aspect of the game for most).
You try using a mouse and keyboard and tell me the movement is easier.

The fear is that players with mouse and keyboard are way more accurate with long range weapons. A lot of times, controller players can’t get close enough to use the gnahser. That being said, I’m hoping it’s either limited to horde/campaign and social. Leave ranked to controller. One of the best parts of console gaming is knowing that everyone’s set up is equal.

Use a mouse then if it’s so OP. I don’t buy this argument of, “it’s unfair to me because I want to limit myself and thus limit everyone else who competes with me.”
Using paddles changes things, yet that never seems to be a problem. People should be able to play in a way that’s ergonomic to them.

I think it comes back to gears players wanting everything to be the same always and they’re frightened to death of change.

Gamers like myself who has used a controller forever can’t just pick up a mouse and key board and be good with it. it takes time to get good with no matter how op it is or isn’t I would never switch my point is key board and mouse players are more accurate with there shot because they have more control so to add that to a game with most of its gamers using controllers it just gives an edge to the pc gamer and in that in my opinion is unfair Preformatted text

I played on controller for all my life and decided to take up the challenge of learning to use a mouse a few months ago. Times are a changin. If you feel there’s an advantage, you’d be wise to evolve.
I actually don’t think it’s any easier for Gears. Your certainly don’t have a movement advantage. Aim has advantages but you also can’t do certain things you can do on a controller.

I have never used a keyboard and mouse

This is great. XB1 moving in the right direction supporting keyboard and mouse. Way to take advantage of it TC

I’ll be very curious to try it, to see how it works… I doubt it would be easy to switch, and we’ll have to see how they’ll treat xbox users with kb/m for matchmaking/crossrank purposes (will they be treated like PC players or xbox players), but more choice is always good.

Kb/M setup in itself was never the reason for me to be against crossplay. It’s the sum of several factors and some it has to do with aim and controls.
I’m fine with crossplay if
1.) the FOV will be the same for everyone
2.) everyone will have the same aim sensitivity options( or at least the sensitivity options should be done in a way that you won’t be able to aim faster accurately with one setup )
3.) You won’t be able to adjust your aim during a roll animation regardless of your gaming setup( I understand this is possible on PC, which makes mis-rolling that less punishing assuming it is true )
4.) crossplay won’t cause more connection issues( this has been the biggest problem about crossplay for me )
and 5.) there are reliable counter-measures for cheaters.

On PC you just bind the roll and the wall bounce to separate keys and you can literally spam wall bounce with zero risk of a miss roll.

Incorrect. You can do the same thing (alt) on a controller too and you WILL roll if you hit a corner wrong (which happens a lot). There are also plenty of negatives because you don’t come out of a roll as quickly. You also don’t wallbounce as quickly unless you are working the roadie button as well, which requires a lot of coordination because it will cause you to not shoot if you don’t time it right. Some moves are far easier on default (and with a controller). And, working two separate buttons itself is like engaging a clutch, it makes wallbouncing far more complicated and that’s why alt players are in the minority. If the alt player misses a bounce, instead of rolling, he stands there like an idiot and gets chunked.

There’s no easy/magic control schemes in this game. But, thankfully there’s a lot of options so people can choose what suits their play style best.

Styrank is also incorrect in some of the things he said but I don’t have enough time to correct every myth I see perpetuated in these forums.

I can literally reinstall the game just to prove to you that there’s absolutely zero risk of a mis click on rebinding the button. I just have wall bounce bound to one of the keys on my mouse, separate from roadie run. With the additional fov I can literally mash it with zero risk since it isn’t bound to any other function and will never serve a different purpose. If you’re too far to wall bounce, it’ll just cancel the input.

Edit: actually found clips I made of this from when I figured this out messing in the settings.

Wall bouncing is not a high skill mechanic and should be nerfed, or forced to be bound to the roadie run function so that there’s some inherent risk.

It isn’t physically possible to perform a roll with this configuration as you mentioned, because the roll isn’t bound to the same input anymore.

Your bouncing is a bit different to the master HyperBounce - it’s literally so basic and requires hardly any skill whatsoever. It’s good that you don’t roll but then it’s so slow it’s not really anything that gives an advantage not is it very effective.

Skip the intro and for the love of god don’t have any sound but this is the best I could find within the few seconds of searching.

Can you bounce so fast your not even going side to side but move forward at the same time?

Really difficult to do.

The above two videos show high levels of skill when bouncing, few can do it so well as this.