Doesn’t matter what you are doing, idle at the main menu, loading a game, turning to quickly, game crashes with the classsssssssssssssic GW502 error. Come on its 2019! I’ve never seen a game with this many issues related to crashing, it’s absolutely ridiculous!!! Even with other games you can find a work around to fix almost any issue. So what the heck is up TC??? Screw the PC community??? You already got my 80 bucks so do you guys not give a damn???

I’m getting incredibly tired of watching the stupid at main intro to the game. I KNOW WHO MADE IT! I KNOW ITS XBOX STUDIOS! I KNOW IT HAS DOLBY ATMOS SOUND! I DONT NEED TO SEE IT EVERYTIME MY GAME CRASHES! I need that time to get back into the ranked game that I’ve crashed out of so I don’t lose 6 billion ranked points.

Even nvidia states that Gears 5 still has issues with being a functioning game! HELLO!!! Since when is this an acceptable business practice??? The game has been out for almost 3 months… THREE FREAKIN’ MONTHS!!! You all don’t even acknowledge that it’s an issue, you just sweep it under the rug and hopefully we will forget about it. LITTLE HARD TO FORGET WHEN EVERY OTHER GAME YOU SEE THE SCREEN FREEZE AND THEN CRASH TO DESKTOP. GW502 ERROR. WHAT. ARE. YOU. DOING. TC.???

This issue is almost as irritating as having to remind your teammates that you are playing king of the hill and not TDM. Play. The. ■■■■■■■. Objective. TC, your objective is to put out a decent game that at least runs properly, and if not to fix the issue that is at hand. 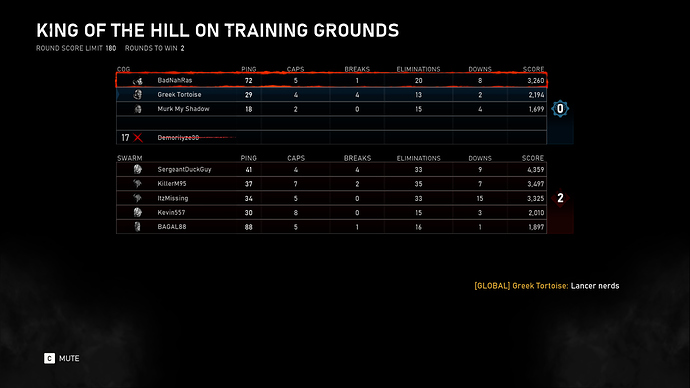 How are we expected to make any ■■■■■■■ progress in this god forsaken game if we are playing 3v5’s, 2v5’s, against (for the most part) a full 5 stacked team. HOW!!! HOW IS THIS A THING!!! How can you punish a player for playing the entire match when 1-3 of your teammates have quit or are afk… What amount of oxygen is making it to the dev’s brains, it seems incredibly low and I’m worried. Loosen up the straps on your helmet let some more oxygen in, its starting to damage your brain. Lancer Nerds.

I only play the campaign, which used to crash a lot for me. Since I started playing the game (and Wolfenstein Youngblood, which was also crashing) shortly after updating to build 1903 in W10, I wondered if it had something to do with 1903 causing some games to crash.

So this went on until a W10 cumulative 1903 update came out, which had error generating as a fixed issue in it’s release notes, which I thought meant false errors, and now it and Wolfenstein Youngblood don’t crash anymore.

This worked for me anyway, it’s worth a try if you don’t have all the 1903 cumulatives installed.

Too bad it didn’t fix the GfWL crashes in GoW 1 though, which wipes out campaign progress.

I’m playing this game on Xbox One and PC, but on PC it freezes and crashes. I uninstalled the previous GPU driver with DDU, installed the most recent version, 436.30, I updated the game with the update yesterday and It crashed 10 minutes ago while playing horde, I thought It was solved but no. Video 1, It crashes at the end of this video. The update didn’t come yet. Video 2 while I was on main menu. I repeat, when I update the game yesterday I thought It was solved, but today when I was p…

They don’t care on fix It, They’re negligent, and Microsoft for giving this franchise to this kind of people,

Yep I still crash on PC all the time too… Sometimes I can get a couple hours in and sometimes ir crashes immediately. Its ■■■■■■■■!