I never thought I’d see this in another gears game, yet, it’s one of the items brought into the game after 2 years? I haven’t tried it out yet, but I just thought that and the Markza mk2 (breechshot) are related too much to judgment, and seeing as both items are back to play with, it made me think TC were working on adding Overrun into 5. That was just a quick thought, but I’m not REALLY thinking that overrun is returning this long after the game released, BUT I did find it to be odd & a weird coincidence that 2 judgment weapons made their way into 5 at the same time. Makes we wonder… whatever happened to the booshka lol.

How would you feel if TC decided to release a DLC down the road that adds overrun into gears 5… would you love it or hate it? I’m not exactly sure how I’d feel if it showed up in 5, but I could def see a overrun 2.0 being fun and returning in a future gears installment. Thoughts?

“ PVP – PROTOTYPE WEAPONS
Throughout the development of Gears 5, we prototyped different weapons for inclusion in PvP, but, sadly many of them didn’t make it into the game.

In Operation 8 we’re going to be adding two prototype weapons to custom matches and events so you can try them out, however, they will not be customizable for skins.

Back in Gears of War Judgment we released a weapon called the Breechshot. As a prototype, the Markza MK2 exists to replicate that weapon’s behavior.

The Markza MK2 is a five-round rifle, with the ability to instantly headshot an enemy, its drawback is a slow rate of fire which can cost the player opportunities or even result in their death.

To try and replicate that Gears of War Judgment feel we’ve also used the original crosshair that was present for Breechshot, which should help to achieve that same gun feel.

The Revive Grenade previously existed as the Stim-Gas Grenade in Gears of War Judgment, featuring the ability to continuously heal players inside the blast radius.

We used that as the inspiration for the Revive Grenade, which can revive Down But Not Out (DBNO) players. We imagine it can be a round changer in objective playlists.**

We’re incredibly excited to get these out to you and we look forward to seeing how you use them in customs!”

Hello everyone! The time has come to talk about Operation 8! This post will cover everything you can expect to see when the operation goes live on Tuesday, August 3rd. Trailer Before you dive into the full post, check out the Operation 8 trailer!...

I’m 99.9% sure Overrun won’t be coming to Gears 5. With only one real patch coming mid drop for OP8 it wouldn’t really make sense. They wouldn’t get much payout for the amount of resources it would take considering the player base is much smaller than last year.

I’m also pretty certain it isn’t coming back and/or being added to 5 (even if TC decided to release a future DLC that had new content and was another title update that put more content in as a paid DLC), but I was more curious to see how ppl would feel IF that somehow happened.

Also, why bring back the judgment version of the markza and a revive grenade now? The markza mk2… I get that since everyone’s been asking for the breechshot since long ago, but why the revive grenade? I thought TC talked about it a while back, saying how it messes with the balance of the game (idk how) & it wouldn’t return, but here it is. Really, that’s probably the stuff I’m thinking about more.

I’m pretty sure they only included these because they had been working on these but weren’t finished by the time Op 8 came around and likely weren’t gonna put in enough work to finish up the weapons to a state they were happy with to put them into general play. So they put them into custom lobbies in Versus as a “prototype” state. I doubt they ever planned to put Overrun in as that is more work than just those two weapons.

I wouldnt count the mode to return for gears 5 as dlc knowing the game content is p much ending after drop 2 and they already said what its going to include. But maybe for gears 6.

Considering how much the plans post release of gears 5 changed, I would bet that all these prototype weapons were ideas that were planned for the main game that didnt make it to the final cut before release.

Wait, have they been added yet? I thought only the Markza MK2 was added so far this op…

have they been added yet?

If you add them in a custom PvP game, yea, but available in horde thru the fabricator or found out in the world in escape? Nope.

Would be nice if the revive grenade was added to horde

As cool as it would be to have more horde stuff if it just revives it might be a little underwealming.

Breechshot has been a fairly requested weapon from what I have seen.

Revive Grenades do go well with a medic class, and honestly really could and should be implemented into the combat medic, but for some reason they arent.

You’d be surprised, on maps with shock drones or explosive scions you can get downed behind cover and chucking a grenade would allow you revive without walking out of cover.

I feel like they could be using Gears 5 as a sort of “testing/beta phase” for these prototype weapons because maybe they are considering adding in another PVE mode for Gears 6? Personally if they were to add in 3-4 PVE mode it wouldn’t get so stale as fast. For example if they added in Swarm/Beast Mode and overrun in addition to Horde and Escape that would be very fun and would be great for people who unlocked cool locust/swarm characters in the future.

Personally after playing escape and horde so much it gets repetitive and boring. If you were able to play beast mode again and fight against cog and break their defenses it would be great. In addition to that 20-25 waves of beast mode would be so great. Honestly it should’ve already been possible in Gears 5 because of the jack Mind Control ability. If you could take control of some bosses that would be awesome. Though i don’t expect to see this happen as it wouldn’t be in their priorities. 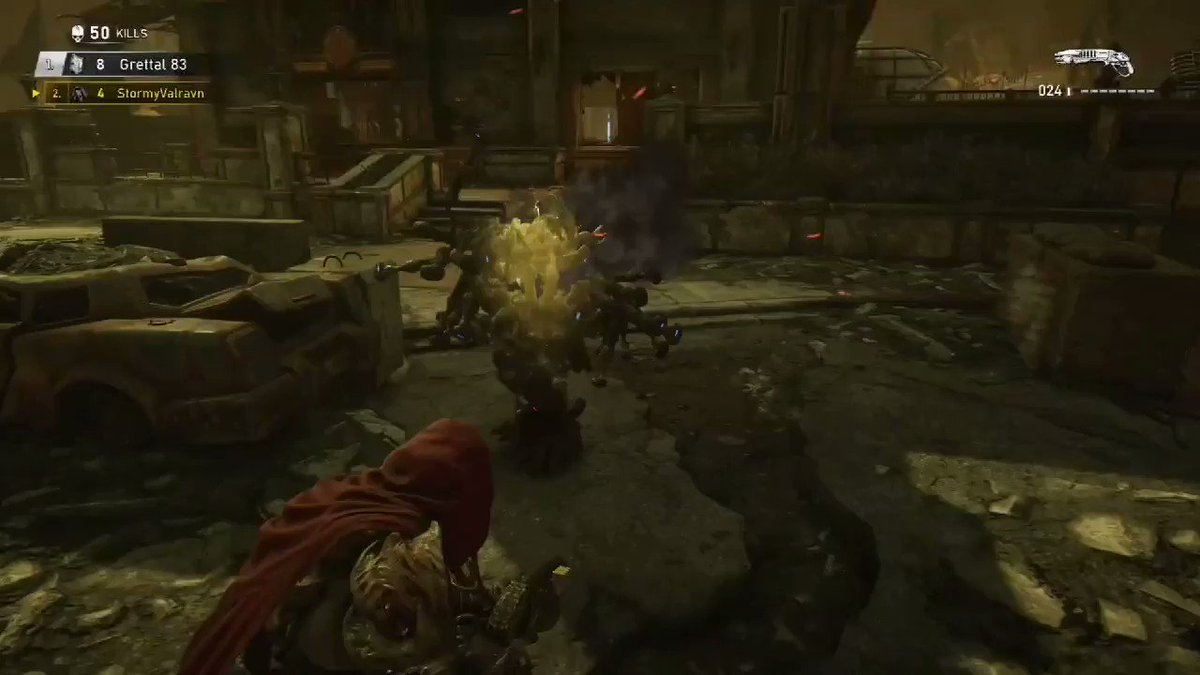 Stormy Raven of the Slain (StormyValravn)

Is this proper use of the stim grenade?? When can have in Horde? @TC_Shauny #gears5 https://t.co/yPfnkaxtFk
1 Like