Your team was heavily favoured to win and you didn’t hence such a massive loss. The other team probably had similar gain

… the rank tier is largely meaningless and misleading, and is in hardly any way indicative of the players’ skills…

That’s basically it, paraphrasing what they said.

So now they don’t show them, so people can’t see the ranks and be mislead by them into thinking they represent actual skill levels the system assigned to those people…

So, basically, the rank is meaningless - the person can be of much higher skill, or that skill, or a much lower skill, than the rank implies, so you can’t judge anything from just looking at the rank…

That’s the impression I got from what they said…

Anyone else wants to try and explain it differently?

I took it as the only reason ranks aren’t accurate is because good players can be on their way up / quickly passing through a tier while they make their way to the top.

Even still, I find that excuse to be weak. Someone who isn’t stupid could figure that out and I’d like to see it regardless.

… the rank tier is largely meaningless and misleading, and is in hardly any way indicative of the players’ skills…

I think they should reconsider though. It did more good than harm.

Yes. Need to show the ranks! But the problem is with this stupid tier system. I wrote why the ranking dosent work.

Ranking is a joke in this game! General Discussion

100% the reason why I stopped playing. I kept losing points being MVP with the highest points whether I won or lost. Rest in Peace GOW

Yes, and that is the huge problem with their WHOLE ranking system…

Consider their “this team is expected to win 60% of the time” thing - ok… But that means that it’s expected to lose 40% of the time! So if it loses, it CANNOT BE PENALIZED, because this could be one of those times it’s EXPECTED to lose! You cannot tell if they under/over performed from ONE game…

This would only make sense if THOSE TEAMS played some statistically significant number of games (hundreds? thousands?) and THEN you look at the number of wins/loses, if you won fewer than 60% of the games, then only THEN you could claim the team was under performing!

You cannot decide that from ONE match, and every game is unique, in terms of team compositions… So, in my opinion (and what do I know, only 2 grad degrees in IT and Finance, and a job where I work with probability theory every day), their whole basis of “if you are expected to win 60% of the time and you lose, then you underperformed” is pure BS… It’s not statistics/probability, it’s made up math…

i can just type that im master of the universe at the end of a match and nobody be the wiser.

yeah or even something to show favoured to win players so a team can send them at each other. would be nice to know if my silver 1 ■■■ is running into an on the way diamond.

I would be nice to see footage of those games/rounds.

So we can actually judge if it’s “fair” to the those point deductions.

watched the video which explains the systems in place and played 3 games before with a better understanding. started today 51% silver one . I won 2 matches lost 1 now im 71% silver one. Think my prob is i play as expected bs the system go up a few hundred sometimes thousand but them face a team that completely destroys me and i go all the way back down to less than i started.

i now know it doesnt matter who kills you in the game but when a player has 3 times the score of everyone else, his team was favoured to win (probably stacked) and a player has a spiking 30-130, If my entire team has the same score/stats after being dominated by 1-2 players how was i expected to play?

Well said, though if you’re bringing up things they shouldn’t have changed from 4, then with Guardian as my fav mode I gotta bring up the not being able to respawn after your leader dies even if the counter already started… now I get you not coming back if noone is alive cause thats how it was on 4… but being in the process of respawning when your leader dies and not coming back is bullocks… I had so many times I clutched or almost clutched in 4 cause I came back after my leader died and always AT LEAST killed leader… now my Guardian clutches are far more rare cause more often then not Im already dead when my leader dies cause I pushed leader and got jumped by 3

So we can actually judge if it’s “fair” to the those point deductions.

It’s never fair to have a system that negates up to 5x the amount of points for a loss than a win.

That’s all that needs to be said. I’m debating the fairness of the design philosophy or the bug, whichever is the case.

I have a ton of people who can verify that I rarely if ever are not first or at worst second on the scoreboard. Not that it matters to this argument though.

I do have a lot of screenshots of the scoreboard + the point results for the match however. It’d just take a bit of time to join them together to present them here.

Omg. A tier system freak! Go tier troll some where else! Lol

Just saw this on JMotionZ stream. Two quitters on his team, but scores twice as high as the 2nd place person in the lobby: -408 tier points. Somehow the ranking system seems to be getting worse with time since the update. 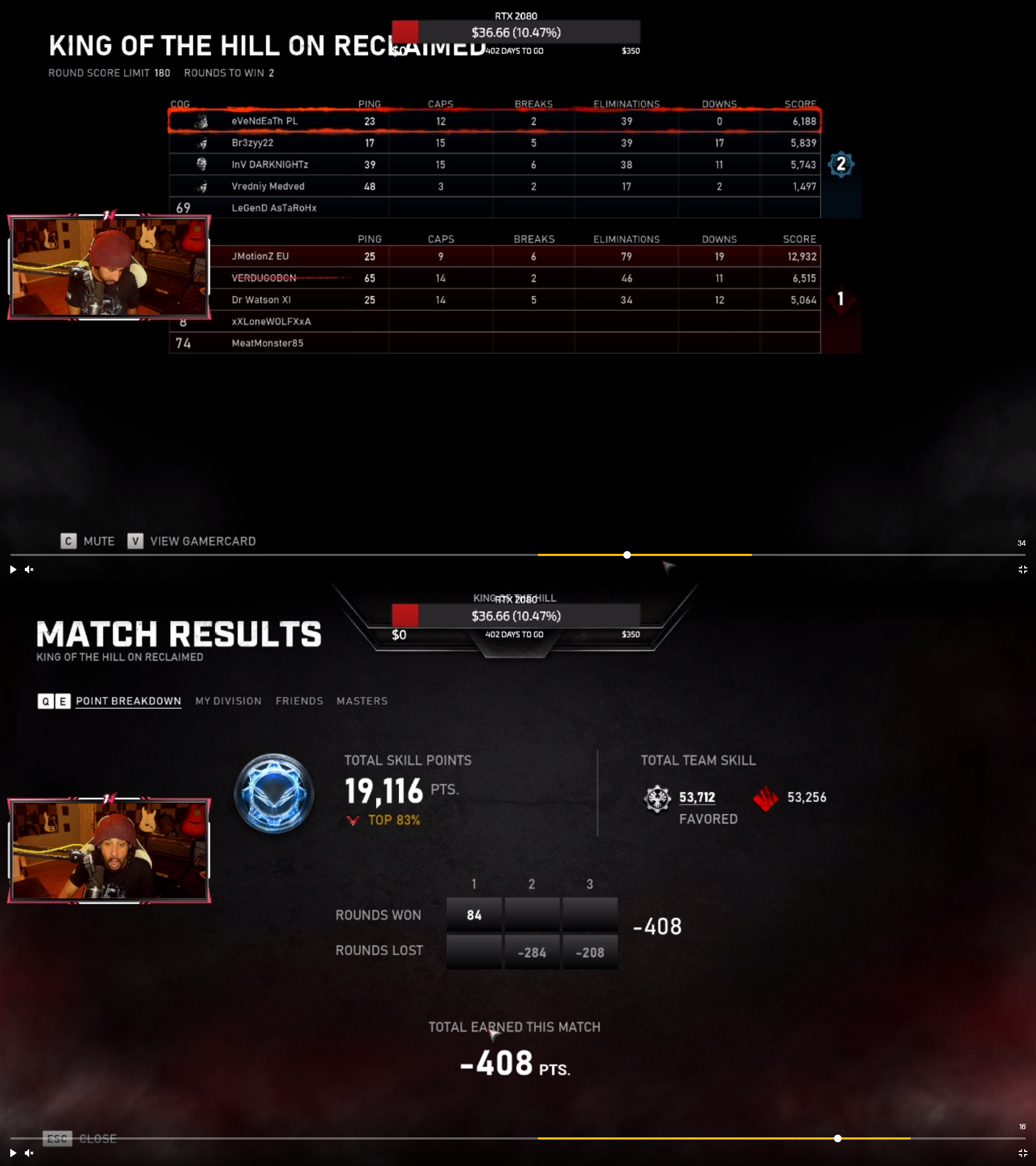 Firstly TC needs to implement something that makes the point loss ease up when ppl quit.

Now, he was accountable for more then a third of the overall skill points and he lost.
Soooo… Yeah.

Now, he was accountable for more then a third of the overall skill points

Which is an enormous issue in and of itself.

The podcast described the rank system as being primarily based on individual performance. How is there any scenario in which it makes sense for MVPing while doubling the next closest player in the lobby to result in de-ranking?

The podcast described the rank system as being primarily based on individual performance. How is there any scenario in which it makes sense for MVPing while doubling the next closest player in the lobby to result in de-ranking?

If the W/L indeed isn’t that important.
Well then it seems they need to work more on their skill system.