Why not? Look at the state of Gears 5 so it’s forums section may as well be messed up and amateurish as well.

No, of course it’s a good idea. It’s just deja vu thanks to the developer’s consistent incompetence.

Agreed.
Only issue is you can’t see who’s what rank so you don’t know if you performed at your level or not

Think the ranking system is crazy but still seems fair. It negates me when I have a bad round or a loss which is warranted.
I do play 95 percent of the time solo so moving up is challenging in gears 5 when there are more quitters than 4 but still I keep managing to up my rank after every play day.

They need to show the rank. Or give you the option to look up the rank in lobby. What’s the point of rank if nobody else gets to see any ways? And what ever happened to the most kills, most downs, most assists stats? Most headshots??? Who cares about up time? Lol

Breakdown of HOW points are given is great. That needs to be in so people know why they did or didn’t rank up.

Quit penalties of having to play X social games before Rank is great.

Thank you for the continued work

Change Koth points back to 300 or reduce to 200. 30 is downright stupid. Adjust your ranking system to Better revolve around objectives when in that particular game mode.

I feel like they were getting strong with the community for a while in Gears 4. Granted, Gears 4 was my first and only Gears experience so I don’t know much before that.

When I first came along to the forums they had just hired some new community managers who were actively doing outreach and feedback.

I remember their twitter was super responsive when I would send them bugs or questions.

They had forms of public test servers for tweaking tunings and mechanic changes.

Rank stats were not super transparent but they did make very large attempts at explaining it and trying to make it as transparent as possible over time. Roughly by season 5 I began to learn the swing and know exactly when I should expect to be moving up, staying in place, or losing percentages and it was pretty damn accurate to my expectations and predictions of where I was in the ‘background skill’ calculator.

Slowly, this began to fade away as they went into hard dev mode for Gears 5… so relatively understandable.

But to seemingly abandon a lot of the knowledge and experience from Gears 4 and instead try to reinvent the wheel from scratch… I dunno why. Maybe they wanted to use as little assets as possible from the previous titles in order to stand out on their own - even changing the title to Gears instead of GOW.

(I mean, they have 2 web domains instead of just merging Gears 5 into the existing GOW web space in the primary section and keeping previous titles accessible from a menu bar. Even the forums are kept on this old, dusty domain. Almost like Gears 4 is the kid living under the stairs)

The two most frustrating things are that they released it way, way too early without proper QA testing (or knew the issues and released anyway) and the tanking of community outreach. They don’t come to the forums and they don’t respond on twitter.

I realize Clevens has come out to answer questions here on the here, which is nice… but it’s a little too late and that isn’t really his job. He drops nuggets here and there that, from a TC perspective, probably isn’t the best thing to put out there - that isn’t totally his fault though. He’s not a PR rep.

And even though the truth of the matter is always great to know, it can sometimes be disconcerting to learn the real reasons behind some changes that were made or getting into direct conflicts with customers (for whatever the reason). Buffers are a good thing in some cases.

Here’s a photo to support that point.

They completely ruined the ranked experience for objective based matches, if I wanted to play team death match ranked, I would simply pick it and go into a match where objectives mean nothing, thanks gears, I was supporting you through the ruff start and even got my general in the tour of duty because I was excited for this game…however if they do not adjust accordingly I may find another game… disappointing

I was supporting you through the ruff start

I’ve seen you make this mistake before and can’t help but correct you.

Ruff = noise a dog makes, a type of bird and and a few other things
Rough = the word you’re looking for. It has several meanings, so here is a link for your reading pleasure

First time on ranked in the last few days, and the loss bias seems a lot worse than last I recall. -150 for loss/MVP -300 for loss/MVP runner up/other team favored, +10 (woo hoo

) for win/MVP runnner up/other team favored. Seems like I’m at the same Silver 3 wall as I was prior to the update, but now it’s Onyx 2.

How are the tiers divided point wise?

Is there like 500 points between each tier after gold 1?

Is it too late to withdraw every bit of praise I’ve given to the updated ranking system and Gears 5 in general?\ 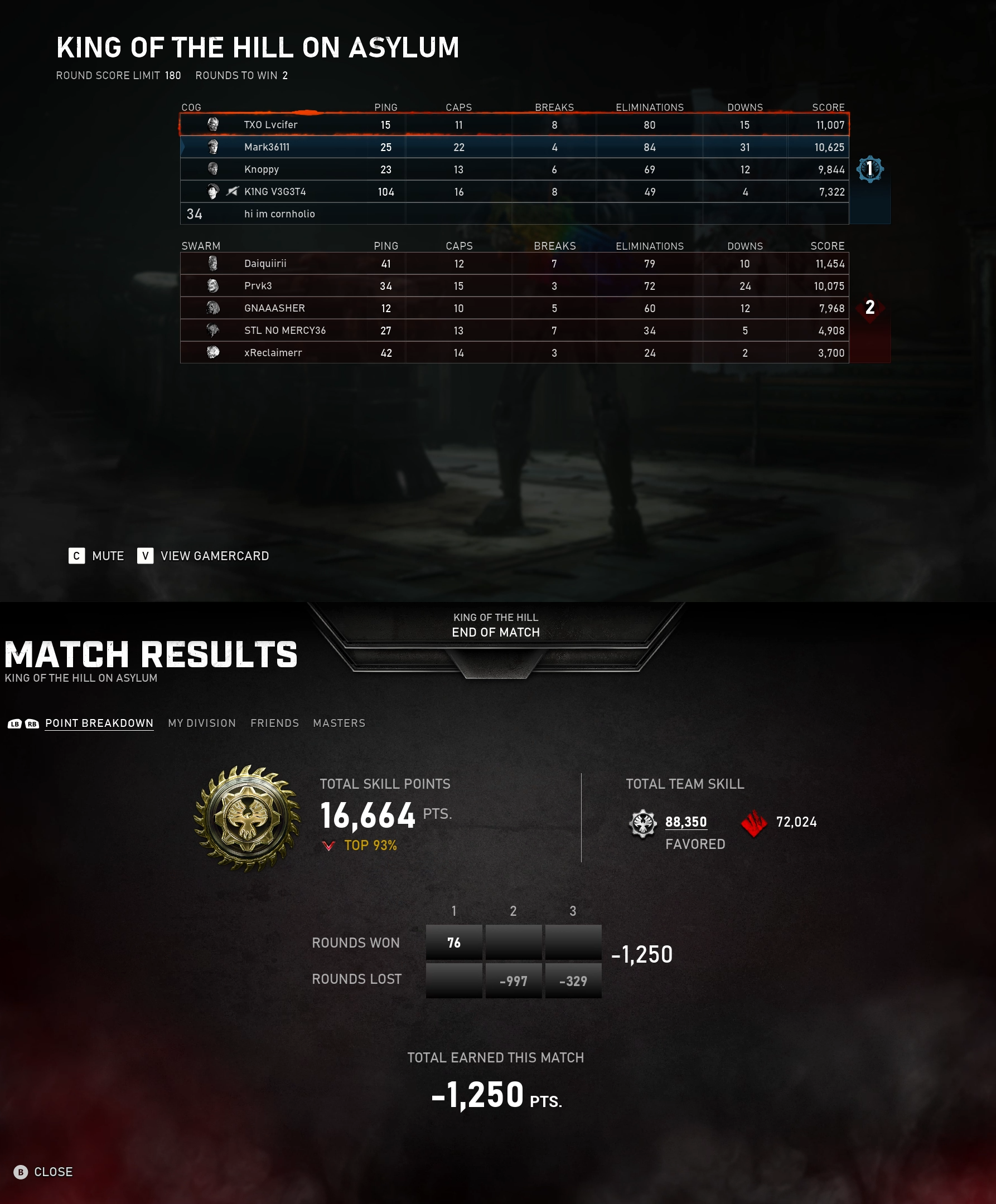 It’s never too late to throw some salt into the ranking system. You’re good bruh.

Ryan better do some quick work…

Clearly we need that updated scoreboard with kills and deaths

We shouldnt get negative points if someone quits

Btw, cus i just noticed - when did that player quit on your team out of curiosity.

AFK in middle of 2nd round.