Gears 5 is the worst Gears?

It’s not criticism mate — you play like you’re wearing gloves.

Damn mans forgot what criticism is and criticized me in the same sentence.

One doesn’t have to be as good as you supposedly are to know that the movement is poor in gears 5. Why you gotta be such a knobjockey 24/7 man

Chill bro thats the gears 2 legend from 12 years ago

Far from the worst.

It’s a joke I won’t let snubbsy live down

I can’t really give too much opinions, I’ve played campaign on all but Judgement, so I can speak there… but only played the Multiplayer for 4 and 5… just pointing out it’s a funny trend that the current game is bad and the previous game is suddenly better lol

Makes sort of sense I suppose cause 4 made a very similar journey as 5, it was bad at the start (not as bad as 5 imo) then got better… but 5 has also gotten better… a few months ago I would tell you 4 was better no doubt, now gameplay wise they are about even to me, I can give credit 5 has improved there, perfect? Not even close, but improved greatly from it’s launch… the Ranked department has fallen downhill though, don’t even have a rank to chase and leaderboards are ALL about who plays more… so 4 is still greatly superior in that department.

Again, this is just my experience of 2 games MP wise.

Gears 5 is better than 4 because 4 was in general a pile of dog food. Especially the gnashed in that game.

Active reloads needed to go, stop acting like they were a balanced mechanic. It should’ve stayed in the campaign from the beginning.

With mercy it’s the most obvious because God I hate that map with a burning passion because all people do is camp up top and lancer. 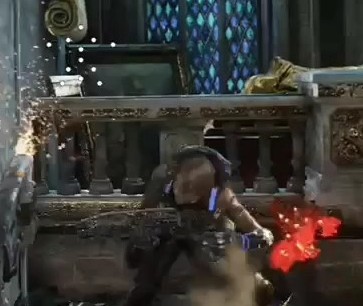 I think this is the right picture but God I didn’t down him until the second shot and his teammate ended up killing me. Ranked tdm btw

I think op4 was prolly the best op in terms of overall enjoyability and tuning. Literally the best.

However, it’s this communities fault, I swear to God that the majority of the people in this community don’t know what they want and just complain about things that THEY WANTED IMPLEMENTED.

Apparently no one liked the old tuning cough “pro players” cough and they changed it, then boom no one ■■■■■■■ likes it. Despite the playlist being dead with me barely being able to find a single match in 23 minutes.

I love this franchise and I loved this game but dear God we the community and poor decisions on the development teams part have ruined it.

If someone can’t actually move, I don’t see any reason to complain about movement they cannot even do.

The complaint here as far as I can see is that the movement is slow. Anyone can complain generally about that. You don’t have to be very high skilled at gears to be restricted by the slow movement in 5.

Icyy basically indirectly told me in a video that his say is more valuable because he’s a pro player; so that’s where we are

he was responding to some comments I left defending us “amateurs”

if it’s overall, I don’t think I can have an accurate list lol

Gears J is something we can agree on though

It has Sofia after all

In all honesty I actually like the multi, it’s different but I liked the change.

The campaign was cool too, more Baird is always welcome.