Gears 5 is hanging from the past

Can we just act like judgment , gears 4 and 5 never happened . I bet the series will be more successful than the current state it’s in now . The new generation isn’t working because the majority of gears supporters are from original players so to think we can just shift everyone over with this boring main character and less horror / gritty feel won’t work . Should had left judgment series for that lane and compared to halo 4 /5 even tho they tried to remove the face of the franchise as well it was still more fun than gears 4 and 5 in my opinion

Can we just act like judgment , gears 4 and 5 never happened . I bet the series will be more successful than the current state it’s in now .

That would only be fine from a legacy perspective. But the fact is that GOW fans won’t just continue to play GOW1-3 for the rest of their lives.

Bold of you to assume everyone uniformly dislikes the new characters and direction of the story/art and that TC chose to use a character as the lead because it made sense story wise.

It only made sense because they made it that way

TC chose to use a character as the lead because it made sense story wise.

It only made sense because they made it that way

I mean, I have never liked the story of Gears of War. I played these games for the multiplayer. Even as a child I could tell something was off with the writing.
So many plot holes, so much wasted potential, and so much logistically impossible lore.

There’s a lot of potential in the basic premise of the series, but both Epic and TC had/have no idea what to do with it. It’s safe to say neither would know a good, or even just adequate, story if it bit them on the ■■■.
The poor writing is just more obvious now, both because many of us are older, but also because TC has ■■■■ script writers.

Epic games is, and has always been, bad at story-writing, but they do know how to produce some quality dialogue. And they also understand the basic concepts of character development, which is more than I can say for TC. So even though the setting has pretty much always been mishandled, and stupid as Hell, when Epic ran things the characters were “fun” and relatable.
They had defined personalities, personal codes of conduct, their own opinions. This made all the nonsensical buffoonery of the old games easier to ignore.
With these new games though, the story has even more logistical inconsistencies then before, mainly due to it being set 25 years after V-Day, when it should have been set 250 years after.
Only now, we don’t really have a whole lot of lovable characters to make the thumb-sized pill that is the crap story of this franchise easier to swallow. Of all the new characters, only Del, and to a lesser extent Kait, have actual personalities.

Del’s a sweet heart, who loves technology, respects robots, and wants to help others.

Kait is selfish and vengeful and potentially a sociopath, but for all that she’s still admittedly badass, and spiteful as all get out. She was willing to kill herself just to screw over the swarm, until an alternative was presented. Like dang, that’s a whole nother level of spite right there.

But as for the rest?

Fhaz is a generic ■■■■■■■■■.
JD is the son of Marcus, and that’s it, that’s his whole personality.
Lizzie seems like she might have had a personality, but she died so fast after we meet her we’ll never know for sure.
Most of the returning characters are just shadows of who they used to be, a failed attempt by less skilled writers to imitate their original personalities.

Tl:dr
All the problems you might have with the story were always there, but now, instead of a bad story with good characters, you have a bad story, with bad characters.

when it should have been set 250 years after

Why should it have been set 250 year after?

So many plot holes, so much wasted potential

Yes, gears is a franchise known for its holes. E holes, corpse holes, rockworm holes. If there’s one this missing from the newer games it’s the holes. If used to forward the plot or not there’s definitely a distinctive and worrying lack of holes now.

Where do people get this “less horror” line of crap?

I get it for Gears 4, but it was a rebuilding situation with bright colors.

While 5 has some of that, there is plenty of horror feel to the game in campaign and escape. I bet more destruction and chaos is coming for 6.

Yeh with today’s political agenda, it’s. Obvious why these chose it to go that way haha

Kait made reasonable sense since she had an obvious connection to the Locust, she’s haunted by her past and both Myrrah and Niles played a hand in it. If you played the campaign you’d understand that. The only time I think she shouldn’t have been the protag was Act 3 because the Hammer of Dawn is thematically tied to JD.

Also female COG have been around since Gears 1 as pilots and have only been even more prominent with each game. And in the comics they’ve been around during the Pendulum Wars too.

If you’re just thinking having Kait as a protag is “woke trash” without considering any context then you’re acting just as reactionary as the SJWs themselves.

Without spoiling a huge chunk of Gears 5, they trashed a story that has been in place since the beginning by trying to ret-con in a backstory that not only doesn’t add up but spits in the face of what the originators designed.

Excerpt from the Art of Gears of War book that shipped with Gears3: 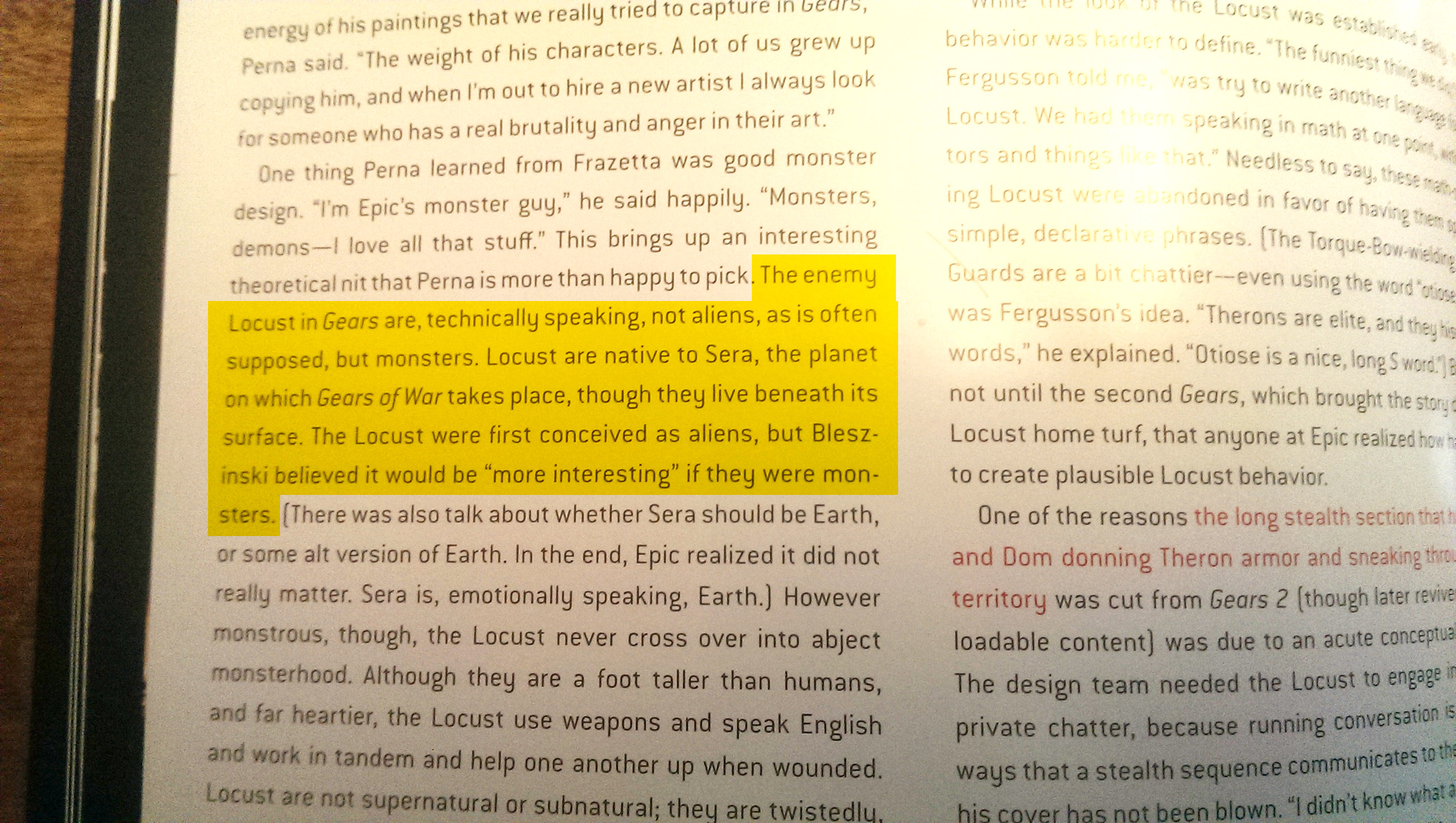 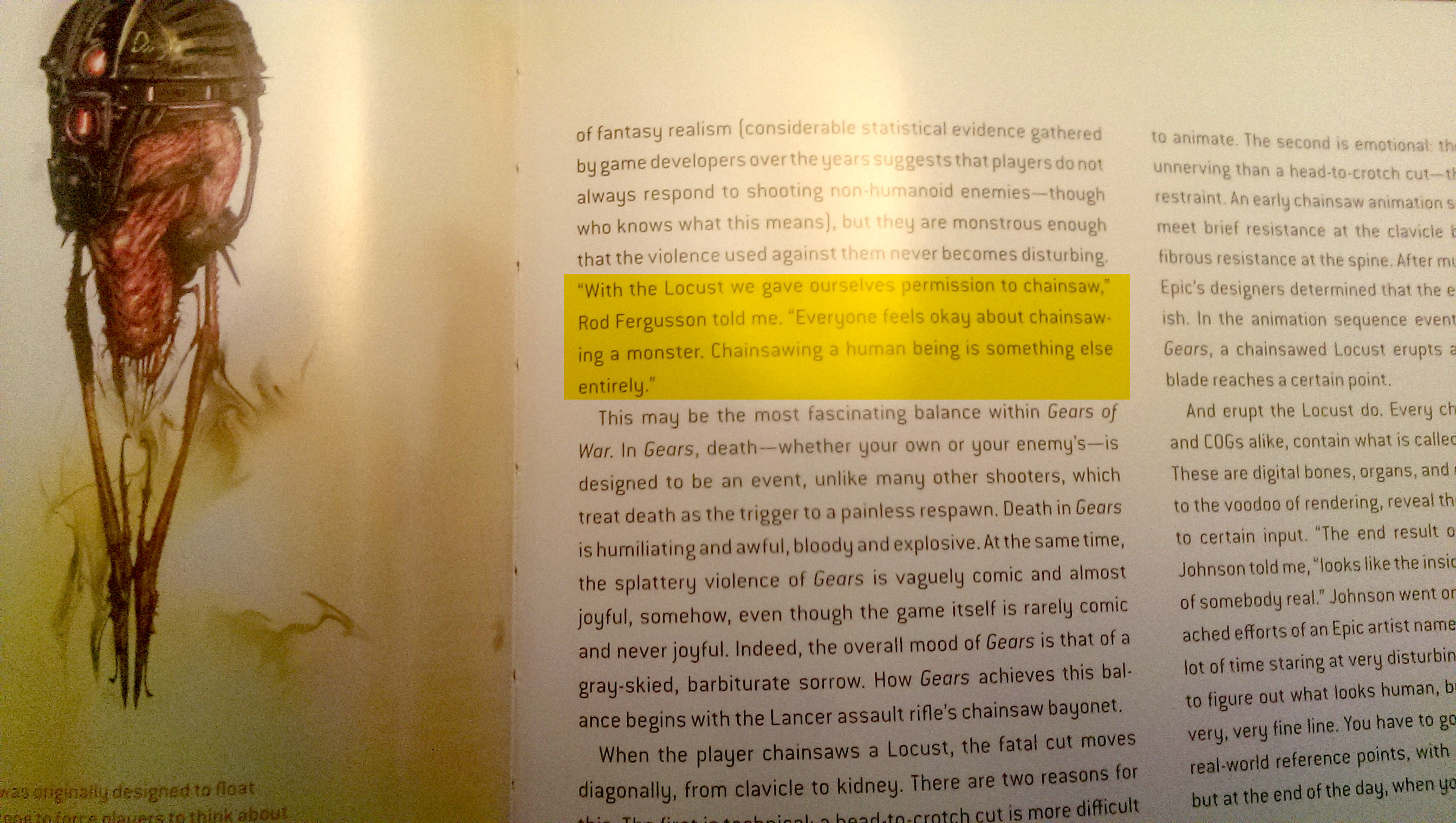 @mizzelphug
The worst part about the retcon is that I dont even think they needed to do that to have kait as myrrah’s daughter.

So retroactively writing that the locust were products of experimentation somehow “spits in the face of the writers” because Cliffy didn’t wanna get flak for his ultraviolent game?

There have been “monsters” with origins of being human. Like zombies.

So if we get a Pendulum Wars game in the future, does that somehow “spit in the face” of the originators too?
Not to mention Rod was an “Originator” too, he was a big producer at Epic.
Oh wait I forgot, Gears 4 happened.

It’s just lazy writing all around since TC took over.

What are they recanting ??

Also female COG have been around since Gears 1 as pilots and have only been even more prominent with each game. And in the comics they’ve been around during the Pendulum Wars too.

Yup, she and Adam were able to see the bigger picture of the war effort. She was talkin some sense to him and his friggin messiah complex and pushed him to leave to do weapons development. And she was reminding Marcus to never let the war consume him. Helena’s a real one.

Also add that Bernie was with Marcus since he started his first tour protecting imulsion pipelines. She’s practically family to him and Baird.