471988×1120 627 KB
^ Anyone else having this issue with Tac-Com? I’m not sure, but I think it stays like that until I die when it’s happening. All the weapon icons are squashed and stretched.

Then there’s the issues that continued over from either GOW4, or from the Tech Test.

Also, this is annoying:

731988×1120 334 KB
They should really only have the Quit application button in the main menu. I’ve hit quit a few times by mistake while in a game, and exited the whole application. It’s bad design imo.

The same thing goes for the B button to exit Quickplay matchmaking while looking at stats after a match. You can go into a stat menu, hit B twice by mistake, and you’re out of matchmaking.

It’s like they’re trying their hardest to get you to exit matches and the whole game. Dunno who is play-testing, or if they’re not pointing these things out, but it’s very annoying. A lot of us mentioned it during the Tech Test.

Biggest issues my brother and I are having is he is constantly dropped still from ranked and arcade matches… also we cannot even start a coop campaign together one always gets dropped within seconds.

In the intermission for versus matches on PC the “esc” option directly removes from the future matches. I think an** esc prompt** needs to be added to it because sometimes when you’re viewing rewards, you can accidentally press esc and leave the intermission.

Yea, that’s the same thing I’m talking about, I just said the controller buttons instead. You should at least have to hold the button, like you have to do to swap out an objective in Tour of Duty. There shouldn’t be a Quit application button when you pause in the middle of a match either.

Yeah I get what you’re saying. But I think a simple prompt solves this issue even if someone wants to quit the game in the middle of the match. #Ragequit xD

On the Design issue front, I still have no idea why they downgraded from GOW4 with weapon customization: 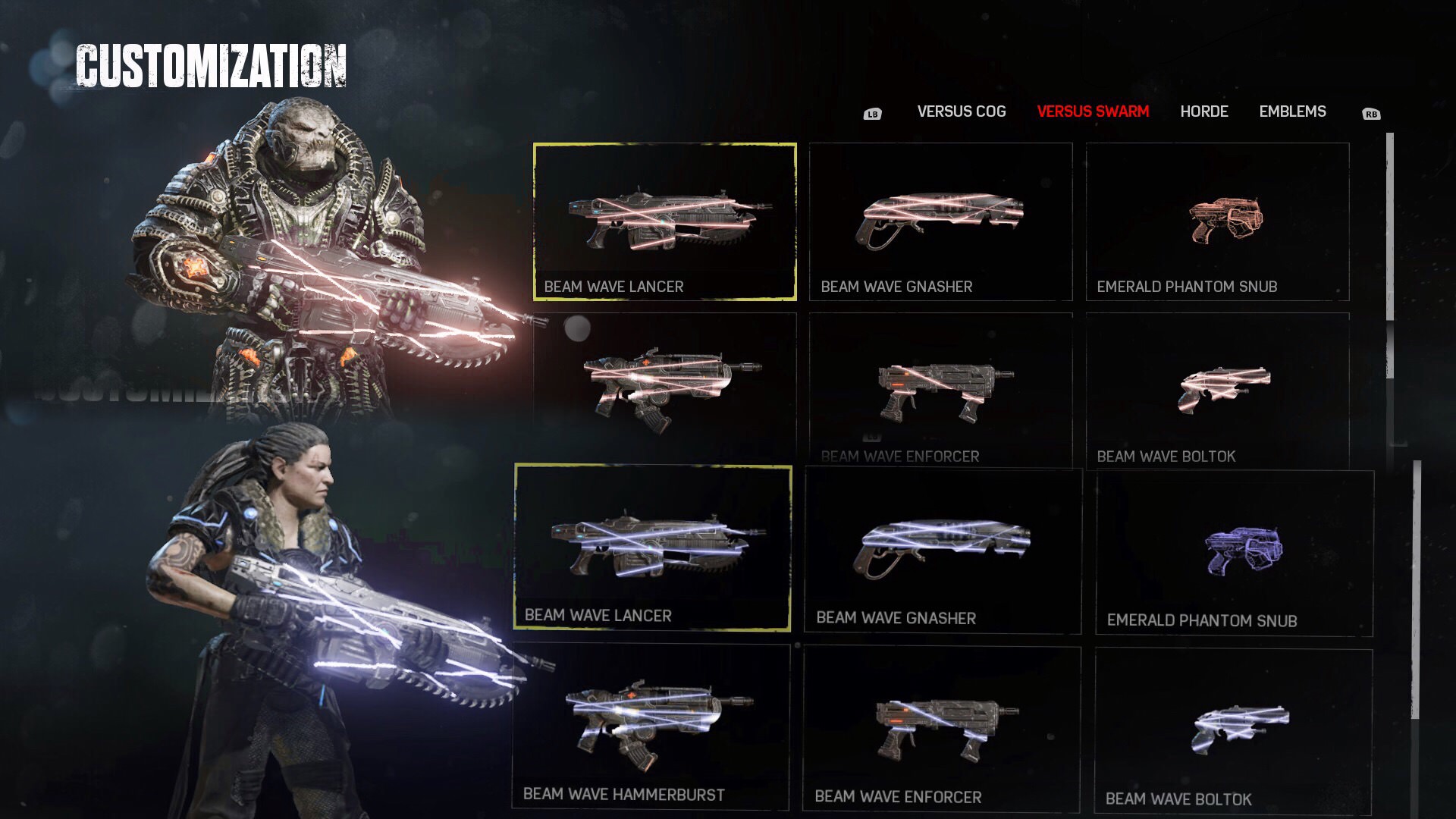 Why in the world did they make weapon customization universal in Gears 5???

Isn’t the skins and stuff they sell a big part of how they make their post-launch $?

They did it right in 4, even allowing a Horde section, it makes zero sense to me that they’d take that out in Gears 5. It’s a complete downgrade, and very silly imo.

In ranked KOTH yesterday, the bottom ring on Asylum stayed there as blue the whole game, and when Swarm was taking it, it’d be red and blue all glitchy.

I had the same problem.

I wondered if anyone else had this sound problem or maybe it isn’t one? Well in the Gears 4 game I could hear where the bad guys are coming from. In this Gears 5 game I played some of the story, they always sound like they are in front of me? Idk I am wearing ear phones usually. This is on the xbox, I couldn’t seem to tell where they are now.

Yea, that 2nd pic, it’s so confusing when you’re capping the point when it’s happening.

@Sylvari_Noila They had certain spatial audio issues in 4 like not knowing where the frags landed by the sound. It seems 5 has some issues with it too.

Oh okay I noticed right away and I was looking all over the place for them, thx I wasn’t sure if it was mentioned somewhere.

901988×1120 363 KB
That re-up 1 lvl 3 looks pretty sweet, doesn’t it? You know, the way there’s no re-up icons in this game like in other Gears, just plain numbers that reset and go 1-100 again. Pretty awesome creative imrovement over GOW4. I like it. This way, no one knows you’ve re-upped, sweet. Makes sense that I only got a thumbs up blood splatter for re-up.

They really couldn’t just create 20 icons for each re-up? It was too much I guess, so they did nothing instead.

231988×1120 223 KB
The same way you get an “Are you sure…” message when you go to leave a squad, where you have to hit “A” button to leave, is the same thing that should happen when you hit “B” to exit a social lobby after a match, it shouldn’t just immediately leave, causing you to exit nonstop by mistake.

And again with the “Quit” button when you pause during a match, it shouldn’t even exist, when you already have a “Main Menu” button. The Quit Application button can stay just in the Main Menu, there’s no need for it all over the place, especially when you aren’t gonna give an “Are you sure” message box, so people don’t quit by mistake, how they leave social lobbies nonstop by mistake with one press of the “B” button.

The design flaws are all over the place, it’s just stupid at this point. You don’t even need play testers to tell you about most this stuff, like the menu navigation. It’s just common sense.

I’ve been experiencing a glitch/bug recently where my weapon skins aren’t appearing in game. in my weapons section the skins are equipped as well as in the bottom right (starting load out) in the lobby. However when i start a private horde game it puts my weapons back to default.