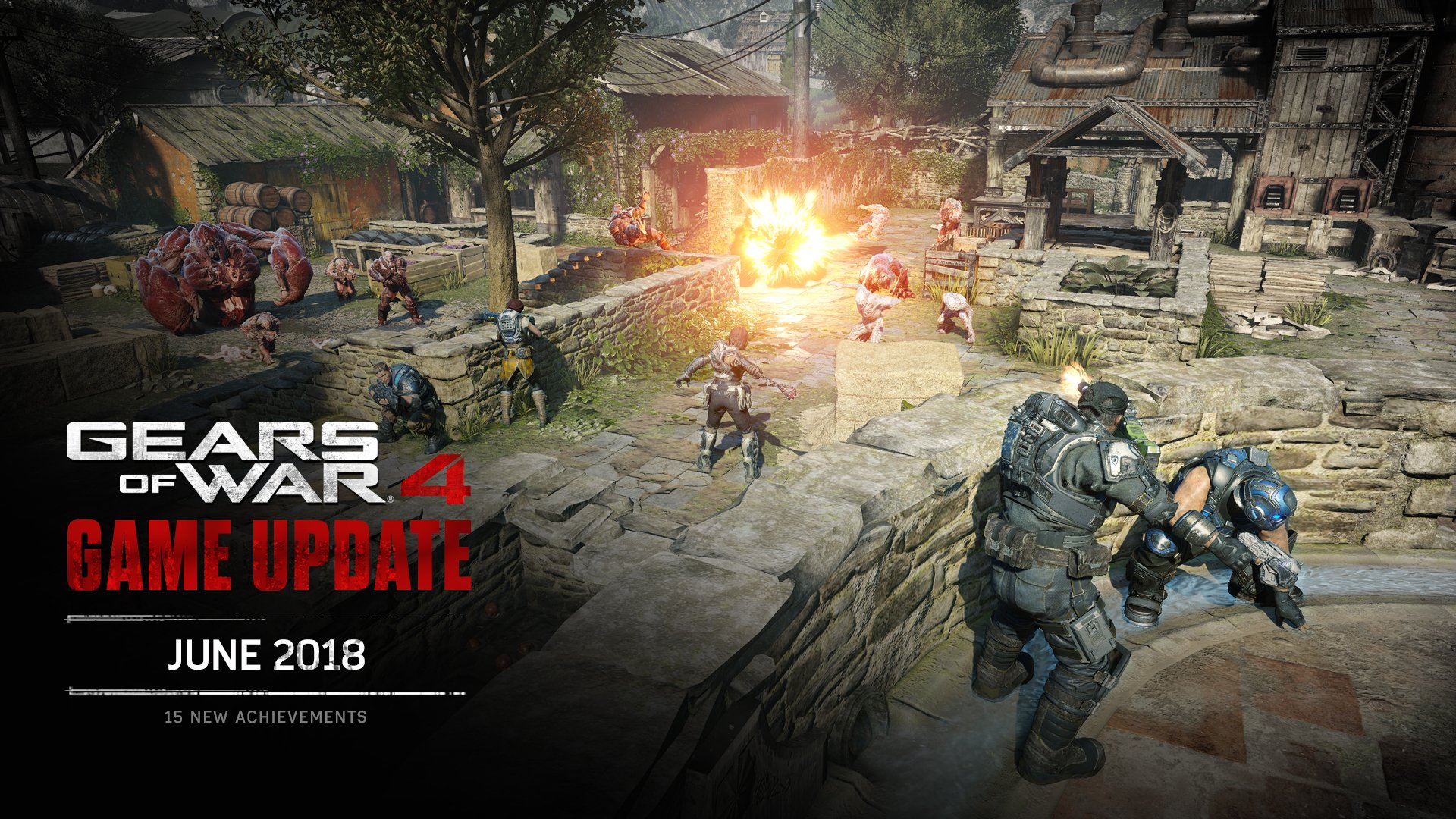 The Gears 4 June 2018 Update is out now, featuring 15 new achievements and more! Get your first look at the 'Road Ahead' for June and full Update details here ⬇️ https://t.co/A1C16ogifL File size: 1.55 GB
Please note that the Update/Achievements might take some time to propagate on Xbox Live. Please be patient and be sure to restart your Xbox/Gears 4. Thanks!

Isnt there suspposed to be tweaking done to the quite penalty

We don’t need new achievements… We need the gnasher fixed, headshot registration to be consistent, kill trades less frequent, and the weapon respawn time back to 30 secs.

Still nothing on Diamond character variants?

I think said at last weeks dev stream they going to announce/reveal it during this weeks whats up and/or developer stream I can’t remember.

So no update on matchmaking\pings\lag sir?

Still having to use much outdated Nvidia Drivers 382.53 just to have a crash free game. New drivers still crashing on Geforce 970+ cards.

Don’t suppose thats a high one on the priority list i guess.,…Ok. Still a big inconvience, I can only safely play only one game on my pc because it will only work well on drivers that WERE RELEASED A YEAR AGO. All my other games have to suffer outdated drivers…so ya thats a thing for many of us Win10 Pc’ers.

And then… what about early and unexplained quitting, Any type of update for this, like a penalty or something?..particularly on HORDE MODE?

Can anybody confirm that the “You are the support son” achievement is only the person going for it or the whole team? Seem kinda extreme to be the whole team. Last time it was just “no building” and on hardcore and it was rough…

This time its on insane… Not being able to build anything by anybody and not even sniper strike or whatever seem way too much. I know there is cheese methods but cmon…

As for the VS achievements, seem Overkill will be the longest to “cheese boost” , 50 is pretty long… But well in time…

We already advanced a bunch of them tonight. No surprise that there is a bunch of peoples in the VS bot playlist going for the power weapons…

game still crashes on pc, in the cut scenes, for a very long time…
Look I understand that you guys get more money from the xbox sales but seriously… this is an old problem that you guys could EASILY fix.

I hope PC players won’t get this treatment for gears 5.

What’s the Microsoft studios skin about???

what about early and unexplained quitting, Any type of update for this, like a penalty or something?..particularly on HORDE MODE?

No, keep horde out of it.

Can anybody confirm that the “You are the support son” achievement is only the person going for it or the whole team? Seem kinda extreme to be the whole team. Last time it was just “no building” and on hardcore and it was rough…

That’s for the whole team. Otherwise would be a piece of cake.

It’s a challenge, so we should expect difficulties.

Having the same crashing issues. I have two pc’s one with a 1080ti and one with a 980ti. Oddly, the 980ti doesn’t seem to have any issues it is just the 10 series card which crashes on anything than drivers a year old.

I remeber the pain of the Original Gears on PC.

That crazy ritual of:

When I got my freezing screen for Gears 4 - I admitted it looked absolutely amazing but gave up on it.

Now the One X version is out - haven’t felt the need to go back to the PC version.

But I understand your frustration and hope I gets fixed.

but i face some problems after the update
such slow find match, slow on customization and load save game.
and pls we want to see new DLC for story Anya is death

Wish they would get rid of the loss penalty for remaining players on a team with a quitter. It’s not fair to penalize me for staying in a ranked match when I had a quitter and to also penalize me for leaving and not wasting 45min of my time playing a game like KOH

What’s the Microsoft studios skin about???

It’s an Animated Weapon Skin with White and Black Ink.
They’re supposed to be obtained by completing 20 Ranked matches and 200 Waves of Horde during upcoming timed event.