A full look at where we are taking the core combat experience for Gears 5. 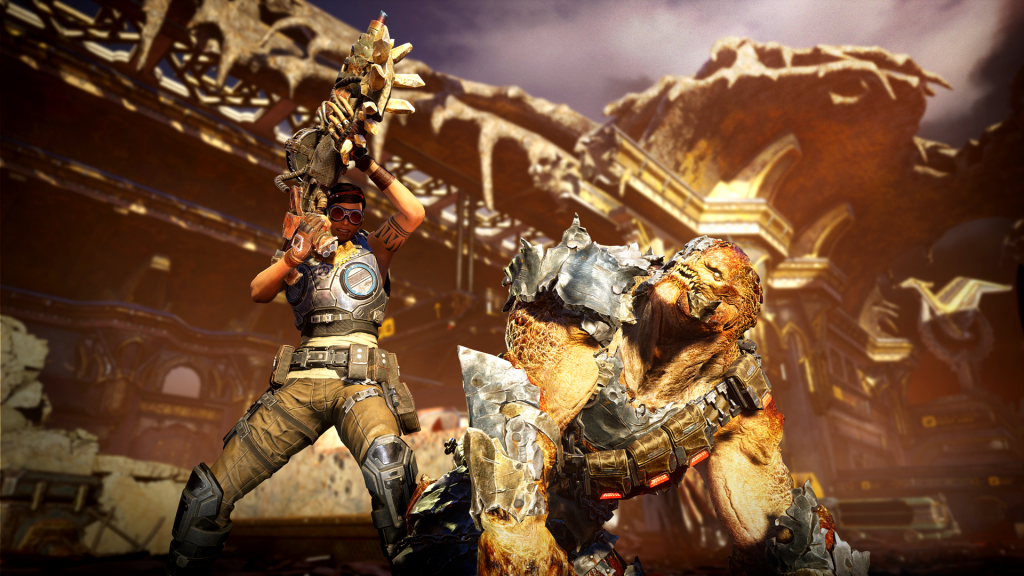 Starting with TU3, we adopted a new philosophy for movement in Gears 5. We believe Gears is at its best when it feels responsive, supports a variety of playstyles and allows for a greater demonstration of skill.

In Gears of War 4, we believed that a fair and balanced game meant making movement that punished people for errors. This hampered our ability to improve the game as our focus was on making sure that every move had heavy consequence rather than its combat potential. This philosophy was adopted in the early development of Gears 5. At launch, it was a very slow, deliberate game that heavily punished you for any mistake. The impact of this slower meta was a game that was less fun to play, while preventing a diversity of playstyle to emerge.

Our goal, with the new movement designs and weapon tuning, is to support more options for both close and mid-range play. We have already rolled out some changes using tuning while other that require time to develop the code changes.

We wish that we had gone this way for launch, we didn’t. We feel that changing direction now will ultimately be the best thing for the long term health of the game, with funner minute-to-minute gameplay and added depth to master.

The first phase is to raise the viability of strafing play for both short range combat and mid-range dodging to give more defensive options when someone is pushing you.

Instead of raising the overall speed, we increased the movement acceleration to get to the top speed faster. This means that moving left and right will change directions faster to improve the meaningfulness of strafing.

The second change was to increase the backwards movements speed. While not completely the same as forward movement, it is now a little faster to allow for players to navigate the close-range combat more deliberately.

With the increase in strafing responsiveness, we needed to balance bouncing and running to ensure the felt smoother and more consistent by adding a small speed increase for slides (3.5%) and roadie running (5%). We reduced the relative impact of the speed boost so the initial speed coming out of a cover slip matches the slide speed and then slowly blends to the roadie running speed. This mechanic has been in previous games – where it was much faster. To give you some comparison, the Gears 4 slide speed was 690 units per second and the current Gears 5 one is 650 units per second.

We know there are two main areas that still need addressing:

We have already updated the Gnasher to bring the gib range in and reduce the close-range damage. We have also increased longer range ‘poke’ damage so that you can chip away at a target as they are charging, dodging or retreating. This makes the Gnasher more versatile and at the same time, requires more timing / aiming close range to get a kill.

Given the slightly faster movement speed, this will mean that charging players will need to close more distance to get the gib and give defending players more time to chip away before they get close.

As of Thursday February 20th, we have deployed further revisions to this tuning based on early feedback. We think that the philosophy has landed well, but the specific values need a few tweaks. 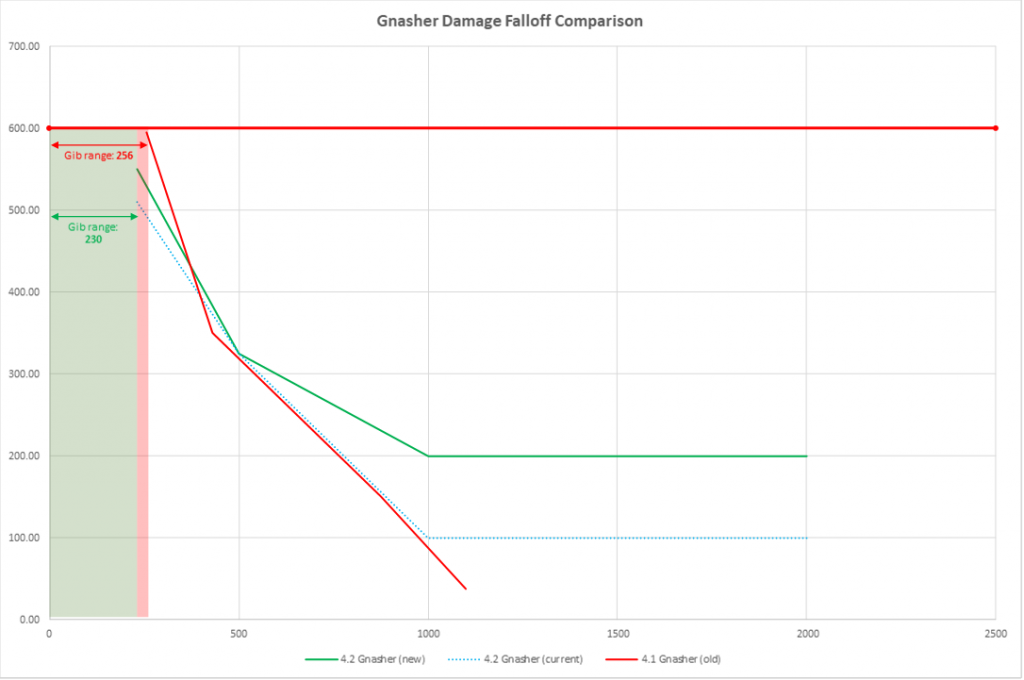 The intention of these changes is to increase the viability of multi-shot Gnasher play. Point blank damage – the amount you hit an opponent for just outside of gib range – is now raised to make two shotting more consistent.

This is complimented by an increase to the viability of using the Gnasher to poke damage with a double increase in damage per pellet at longer ranges.

Finally, the Gnasher bullet reserves (the amount of ammo you start from spawn with) has dramatically increased to allow players to focus on using their shots and clip management for reloads rather than overall ammo management.

For details on the first changes made last week to the Gnasher, head here.

Rather than making each action punished with a delay, we want to move towards a system that provides trade-offs. Instead of having a wall-cancel cooldown as we’ve had since Gears of War 4, we will introduce a short slow down on slides following a cancel. The more you cancel, the more you will reset the slowdown. The slow down will fade off quickly. This means that if you use longer slides, i.e. more efficient with your cancels, you will be able to move faster and evade better. If you cancel too much, you will make yourself more of a target. We will take time to tune this value to feel natural and intuitive. The point isn’t to remove hyper-bouncing anymore, just make it a trade-off. If you can find the best rhythm of sliding, you will have the most combat potential.

As part of our making it feel more responsive process, we are re-evaluating all the shooting delays in the game. These are primarily in place to make network play fair; however, we may have errored too much on the side of fairness and taken out some of the ways to play. We will be revaluating to see if we can balance the fairness. Until we go through this, we can’t say exactly which ones we will change and exact timing.

We will also be looking at making the delays anisotropic, e.g. different in different directions. Rolling forward will have a greater shooting delay. Rolling sideways and backwards may have different delays as well. The back-a is defensive move. Rolling forward we don’t think should be as powerful. Right now, there is only a single number to tune.

Once we feel the movement and Gnasher tuning are in a good place, we will do another pass on most of the secondary weapons as we evaluate their effectiveness against the new movement and Gnasher. We currently are looking at the Snub, the Markza and the Flashbang, but may look at others over time. We won’t commit to final changes until after the rest settles.

We see Gears 5 as a living game. We want to keep changing it until we find the best overall game. This will mean some rough spots, but in the end, we think that the game and the players deserve it.

As always, we appreciate the feedback and look forward to seeing you online.

Well I cant say I didnt know right away they stealth changed the Gnasher tuning on Tuesday. I dont know why they cant give us a heads up instead of telling us afterwards. And two tuning changes in two weeks is crazy to me. But I guess this is being a Gears fan now.

“We see Gears 5 as a living game. We want to keep changing it until we find the best overall game. This will mean some rough spots, but in the end, we think that the game and the players deserve it.”

All I can say is keep up the good work TC. I moved away from PvP after Gears 3 launched because my ISP changed and the lag made it so that could never predict if the Gnasher would work. I stuck to PvE modes.

Fast forward to Gears 5 and for the past 3 weeks my performance in PvP Gnasher battles has skyrocketed. Now when I lose a fight, I can pinpoint my mistakes (like poor positioning or poor timing with the trigger). It’s almost like Dark Souls now where I am improving because the Gnasher always works the same regardless of which match I’m in.

I know this is SaaS so the game is constantly evolving so my experience might change, but I’m glad I got to experience the Gnasher as I had always imagined it.

I really hope they don’t decrease/remove the delays that are in place. The networking already fails to keep up with the current pace of gameplay. Please don’t make it worse, TC.

Honestly, they are just throwing ■■■■ against the wall and seeing what sticks. Im annoyed today lol. If you cant tell.

No. They’re listening to the GOW reddit/twitter/forums community, which is much worse than throwing ■■■■ against the wall.

yeah you are right. And honestly if they do that this game will never be finished. There are varying opinions on where movement and the gnasher should be. They need to stick to something. They are never going to make everyone happy. All i want is a non weekly changing game.

I don’t watch the livestreams and after skimming through the post I don’t see any mention about fixes to the button delay on the default controls…
It’s no big deal with Alt controls and button remapping workaround but sheesh I thought this might have been fixed by now.

(If this has already been fixed and I just missed the update/post someone feel free to correct me).

Is this really an ongoing issue? I use default.

I know it was at launch, but I don’t remember seeing any changes. Switching to I believe Classic-Alt removed the input delay, and simple button remapping could change your preference back to default.

I would have to try it to see if there is a difference. If there is i probably already adjusted to it.

When I read this update all I hear is “The game is not fun because the movement was slower in the beginning of the game”.

The part that gets me is that the update say we want the “duels” to last longer. With the movement speed all everybody does is go for up A’s or try to go for the one shot.

Everytime I go on twitch I just see people flying and doing 360 wallbounces. How has Gears of war become this ?

The game is simply not fun because of 90 different reasons rather than the movement not being quick.

The maps have no replay value at all . Everytime I get on to play it is the same three maps played. It also 2020 and we cant get a war journal. Where are the leaderboards in the war journal.

This is generally sounding positive, though they absolutely do not need to increase roadie run speed. Its already way, way to fast.
Tc will never get the balance of movement right until they revert to the roadie/slide relationship that has existed for 5 versions of gears.
Roadie has to be slower than slide.

The for reference point is great, I wish tc’s posts about changes were always filled with reference information.

While I look forward to some of the changes, until they fix the games online consistency it’ll be hard to judge how these changes affect gameplay.

Can someone clarify for me if any of these changes impact PVE modes? Do we still have different tunings for campaign, horde/escape, and ranked?

It says versus, so it’s definitely targeting ranked…Horde nor Escape are affected.

What about all the movement tweaks?

“The change will is live”. Such a great sentence.

Don’t get me wrong sir, but they never catered any movements tweaking for PVE, even in Gears 4

The game is going to keep changing every week or at least every two weeks.

The roadmap looks fine imo, but i certainly think it will be like the latest gnasher update - comes out, feedback and tune.

Unless I read it wrong I think they increased the movement speeds to just slightly slower than Gears 4 levels.