The flag whilst being carried should should display the “flag” or banner the carrier/player has equipped. 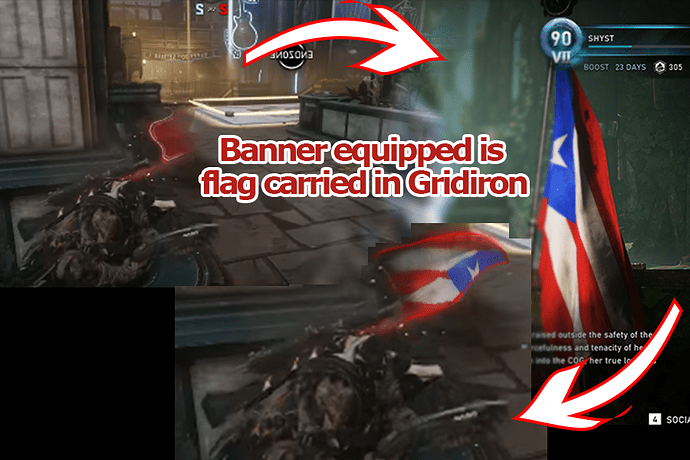 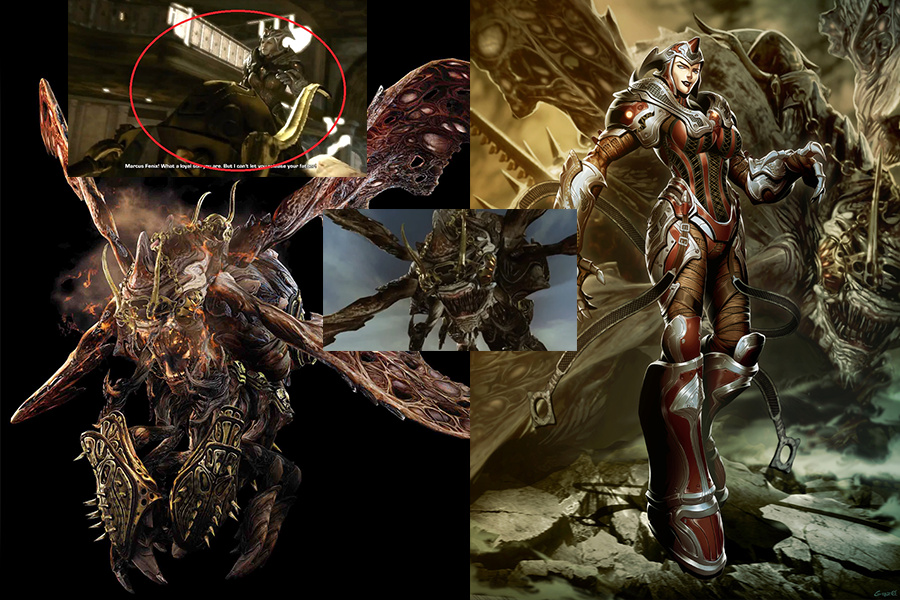 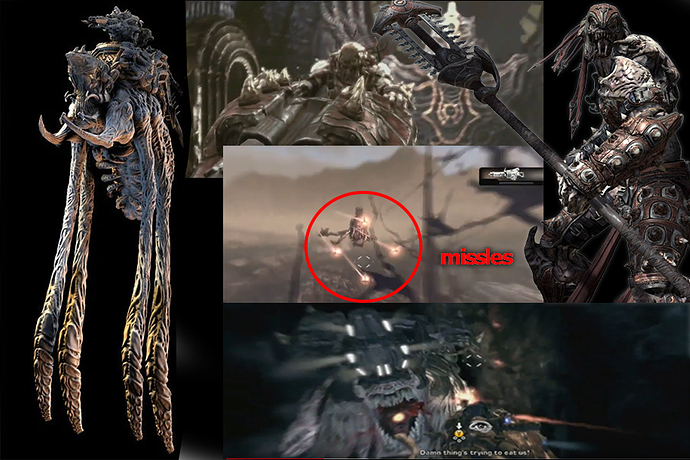 Something to think about would be MULTI-PHASE BOSS BATTLES. ie… – Knocking Skorge off his reaver then a new life bar appears and now your team must defeat Skorge/Myrrah themselves!

Myrrah: The Queen rides Tempest her winged beast. After defesting Tempest Myrrah rises from the ground with super buffed dual wielding Gorgon Pistols and waves of wretches as her passive attack. Wretch waves are triggered when she performs an animation calling them to to fight like Kantus’ screech/call in Gow2/3 campaign.

Skorge: General Skorge sits atop his flying beast, Hydra as well, with a powerful secondary attack; roaring that staggers and slows nearby players as they defend against the strong winds from the Hydra’s howl. His Hydra primary fire would be quad rockets similar to the missiles fired by the Kestrel in horde. After defeating his Hydra, Skorge rises from the ground. Now you must face him head on defending against his double chainsaw staff. Running is pointless as he hunts you down with large leaps like a pouncer when he isn’t walking. Chainsaw duel button mash sequences randomly occur when near one of his attacks. Emphasis on random because being attacked by him could mean serious damage or a chance to counter and deliver serious damage instead.

interesting and helpful ideas will be added to main thread

Something to think about would be multi-phased boss fights. ie – Knocking Skorge off his reaver then a new life bar appears and now your team must defeat Skorge/Myrrah themselves!

What kinda fight is Myrrah gonna put up? if Marcus tried the stab maneuver on Skorge or Raam we wouldn’t have a series. Myrrah just went stab.

Interesting topic, lets actually think about this; Id think she’d have Super buffed dual wielding Gorgon Pistols and waves of wretches when she performs an animation calling them to to fight like Kantus’ did in Gow2/3 campaign.

Any Tour of Duty menu ideas to make it more efficient?

Other than that your idea to jump directly to customization from reward page is good.

(post withdrawn by author, will be automatically deleted in 24 hours unless flagged)

This would be cool but maaaaan would insane+ be super difficult to beat.

Plz do NOT give’em any more “GREAT” Ideas!!

How are you supposed to beat Myrrah’s bug? The only way Marcus managed to kill it was using the Hammer of Dawn which is currently not available in Horde.

That aside, I seriously doubt those types of bosses have any place outside of the encounters in the Campaign that were definitely purpose built for those enemies, because it’s doubtful they’d work on your standard Horde/Versus map.

We had a kind of multi-phase boss fight with RAAM in RAAM’s Shadow, same can be said about Skorge in Gears 2 (even if his death was underwhelming).

Myrrah wouldn’t have physically been able to do much, a random firefight battle with her would’ve cheapened the final fight and been too arcade-like.

She went out in the best way possible; defiant of the filthy, evil humans and persistently loyal to her faithful Locust Horde.

Just shoot and damage Tempest & I beg to differ. Its a game, just balance it, and if their battles are so grand these bosses could be saved for a wave 50 encounter.

It’d be nice if every (New) Map had it’s own Wave 50 with a mini cutscene and everything. At least that’d warrant their 3-month time period.

Like say Panahu had a massive Locust-Lizard thing (Like the bones we see). And Alfather’s we could get a massive DB-Gladiator thing.

Of course–sorry if this requires too much creativity for TC.
Oh damn @Nineteenth_Hour now I have to remake my Map Mocs to include a special Horde boss.

Reminds me of the idea the Stump had inspired me to… a massive three legged DB weapons platform(something like a tripod) that had a large circular or rectangular body and something of a central “eye” with a giant laser in it(totally not ripping the Hammer of Dawn off) that would have had loads of weapons mounted on its body as well, besides the main “eye” weapon.

Of course, it would eventually have been corrupted by the Swarm as it was used to assault a place they’d overtaken or one of their burial site hives and you would eventually have had to destroy it from within while it was roaming old ruins or assaulting a Settlement, by temporarily crippling one of its legs so you could actually climb on, while avoiding its main “eye” beam and other weaponry, somewhat like the way a Scarab in Halo 3 is taken down, and destroy the power core inside after fighting through Swarm or Rejects on the thing to get to the core of the machine, to cause a chain reaction that eventually makes it explode, leaving a big crater behind.

I haven’t really made any kind of rough drawings to the way I imagined this thing, mind you. It’s just an idea I came up with once that I never really followed too much beyond what I have described above.

Ok. So this post is practically a copy/paste of one of my really old posts from the old forums. So if you herald from the old-school forums, you may have read it. Just re-posting to share these ideas because I’m proud of them. And talk about Gears 5 is a lot higher now then it was 7 Months ago. And for simple-sakes. This post is just a list of all my ideas I threw at the old forums for Maps/AI Enemies/Weapons/etc. I know that they won’t end up in Gears 5, it’s too far in development, but I stil…

-DR-2 Obliterator: Now this is pure fiction…but hear me out. This DB would be a boss, like Snatcher, Kestel, etc. But it’d be a DR-1 on mega-steroids. It’d have a Tri-Shot built into one arm, and an Embar-like rifle in the other, with a grenade launcher on it’s back (Think FO4 Sentry Bot) Like the Brumak, you could damage it’s weapons to stop it’s damage. And on it’s back it’d have a weak spot, protected by a temporary Guardian Shield.

Are you getting this idea from HZD?

No, read the beginning sentence. I even told you of this idea way back when I first had it.