Let me know what you think but with the little bit of white on the main guy’s hair–pretty sure that’s Gabe.

Don’t know if anyone’s pointed this out before. Interesting.

I could be wrong, but I thought that was just a sculpture of Marcus, they had something similar in one of the Gears 4 teasers

It’s easier to see in-game, but I swear I can see his little white hair lip on the left. 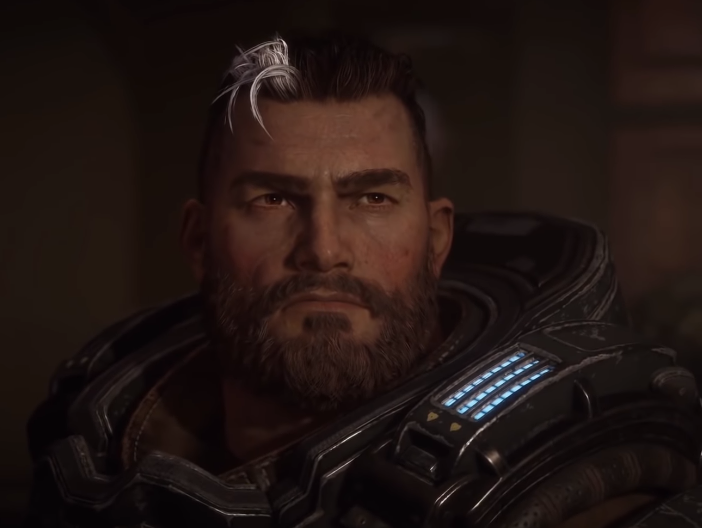 I call Gabe “The Skunk” and Sid “The Walrus”.

In before @AmicableWall421 tells me that isn’t their real names

Honestly I want them in Gears 5 now–the only “guest” characters I’ll accept. Feels wrong to have a mainline Gears character that I can’t control over-the-shoulder.

I thought the character on left was Kait. If not, then it could be Mikayla.

The one on right looked like he had hair, so it can’t be Sid. Sid is bald. It looked a bit like Mac. But the sleeve and arm is wrong.

I call Gabe “The Skunk” and Sid “The Walrus”.

Have you thought up of nickname for Mikayla? I’m just gonna call it “Mika” because the name is too long

I always thought they were just generic unknowns and supposed to represent us - the fans, the testers.

If that’s what those pic truly are, then we should be allowed to do that as well. Create a COG, our own version. But it’s just artwork on a banner

Gabe Diaz was based on one of the " TIGRES DEL NORTE " Goup members:

“Skunk”…you beat me too it.

Is the Cole Train Pre-order bonus for tactics? I’m confused if he’ll be 250 in the shop or a pre-order cross promotion thing for 5

It says for Tactics, he’s in the Tactics Launch Trailer… idk if he’ll be a cross-promotion skin.

The Cole from tactics if for use only in tactics. You can get thrashball cole in gears 5 by playing ranked gridiron, which i think comes out tomorrow.

For ranked gridiron or cole? Could have sworn it was all in the whats up but i just checked and it only says “a certain character skin”. Whatever, maybe im just crazy.

In this week’s What’s Up, Gears Tactics goes gold and we discuss what’s next for Gears 5.

It never specifically said Thrashball Cole. Thematically it would make sense, but it could easily be one of the other Thrashball variants like the Locust Drone, Sniper or Kait (or something new).

I refuse to believe it, ive already got it in my head that this was confirmed and nothings gonna change my mind, certainly not a vegetable with a functioning circulatory system.

I guess we’ll see. But I can’t wait for the announcement. “Play Ranked Gridiron to earn Thrashball Kait, we know it’s ugly but take it anyways! If you want Cole or the Drone–give us money!”

I’m saving my iron from the OP then

Luckily for you it’s confirmed - Thrashball Cole is the earnable skin for tomorrow.