Many of us have commented that the new “Inverse Omen” is really bad and looking at Gameplay, it’s really OTT.

It completely blocks off the sides, top and bottom of the screen and you still have the middle portion looking weird.

But sadly, it seems like it’s here to stay.

I would really hope that the community comes together and feedbacks to TC that an option for a less intrusive Omen is introduced.

That, and please can we switch off In Game Live Ribbons

I mean, looks at this 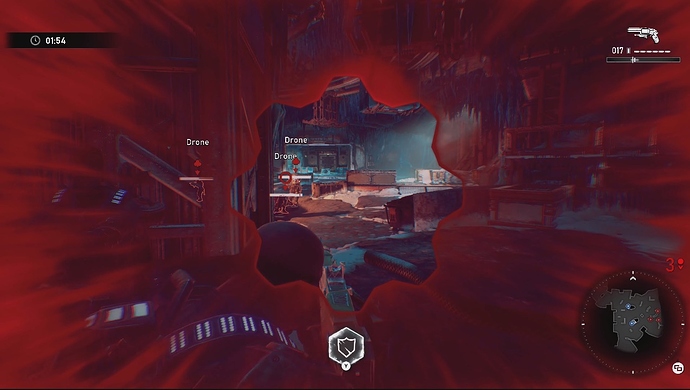 Title has been updated to better reflect the feedback process and the fair points made by Ryan and Octus to try the game first via the tech test.

During the Dev Stream, @TC_Octus and the crew were playing Escape on the Dev Build and the Omen did look “better” as it was slightly “toned down”.

However - compared the shots below to the ones above. Big improvements made already if this has indeed been updated following feedback.

Overall. I’m still hoping we get much less intrusive health indicator or that we can turn off the Visual UI on the sides.

I’d be completely happy with JUST the Inverse Omen.

Ryan Cleven confirmed infact that it wasn’t changed and is still the original Omen from E3 which was surprising to say and at least clarified that situation.

25 Likes
Fix the damage Omen HUD please [UPDATE]
Gears 5 List of All Settings (Pictures from Microsoft Store)
Stop splashing my screen full of blood please
Unpopular Opinion: New Omen will be fine
Two things to make 5 better
Really good except health display is distracting
Give us a health bar instead of the reverse omen!
Am I the Only One Who's Fine With the Reverse Omen?
The omen but funny
Red screen when dieing
New Damage omen sucks!
Please give us the original omen
Blood on screen needs fixing
About gears 5 omen!
Sorry but the new omen is obnoxious
New invert omen feedback
New invert omen feedback
Red Omen Upon Taking damage is INSANELY overpowering the screen
Omen when enemy hits you....WTF?
The red omen in Versus has to go... (videos)
Giant Gears Symbol On The Screen In Gears 5
The red omen in Versus has to go... (videos)
Despite the problems with the new omen
Question re new red omen
Fix the damage Omen HUD please [UPDATE]
#Too red when hurt
Spending more time here
The Gears 5 inverse omen and how to fix it
ID3vilz_Speed (ID3vilz Speed) June 13, 2019, 3:59pm #2

If it’s here to stay then I think it needs to be more “clear” because as u said it blocks off the sides,top and bottom of the screen too much.

If you look at the first picture, there are a few spots that aren’t even transparent.

I’m hoping more people voice out in the BETA.

Yeah, I think it’s just “too much”
Well, now we gonna wait and try it on the tech test and then we gonna see.

Ugh, that’s terrible. It will def screw up players in the game.

Definitely, this is the concern.

You’re pretty blinded as soon as you take damage!

I’m with it being like the way it is, just not that extreme and so aggressive on screen.

I fail to see any significant positives from this inverse omen. Makes it easier when fighting an opponent in close combat, but if you’re that damages it’s either yolo or go for cover. And if you go into cover the view of your flanks are significantly reduced. And at that moment your main concern is to avoid being flanked… This could be a serious hindrance in modes like Horde.

It’s blinds you when you are dealt damage and very quickly at that.

can we all just wait for the tech test to actually try it out before you grab your pitchforks?

The screenshots are really conclusive that it’s bad.

The general population will have a say on the tech test but I’m sure we will see many threads on this.

Well imagine running around like that when being a Scout. I can already tell this is going to be a significant handicap.

I really don’t see why this is being implemented. Like the moment you’re damaged the best vision you have is the direction you aim at. Which is exactly the thing you shouldn’t do if you’re that badly hurt. There’s a reason why in Gears of War you can duck and stuck into cover.

the omen also serves as a hit direction indicator if you didn’t notice in some of the videos. the inverse omen lends itself to this feature better than the traditional type.

I mean, I know what you’re getting at. We first have to wait and see. But I do hope you understand the concern of people here. This isn’t a small technical change, this thing can really influence the gameplay.

is it the intensity of the effect or do you guys just not like the design? because that can be tweaked for better transparency fairly easily

The sheer intensity and visually crippling effect it has.

Well I have to admit that for me a part of the dislike is due to my fondness of the current omen. It’s what I am used to since the original game. But I can adjust to change, as long as it is an improvement. Currently I don’t see this as an improvement.

Exactly, I mean we get it the new omen it’s not really that bad but the effect around it ARE.