Favorite Campaign Moments in Gears 4 and 5

why does Dom have a unique set, or Cole? Is it because hes a huge dude and normal armor wont fit him as well?

I know Cole and Baird are part of a different regiment. Marcus and Dom 26th Royal Tyran Infantry and Baird and Cole in 4th Ephyra Light Infantry.

The more you know

Gears 4 I liked the prologue and the motorcycle part and then being in the giant DBs.

Gears 5 I really liked the Mt Kadar facility up until the matriach. I did enjoy the expansion into the locust’s lore as well.

Though I hated the “open world”. I did the tiniest thing out of order and then got locked into a part I did before and the whole chapter saved there. I had to redo hours. Plus, it felt really off to have it in a gears game to me.

This is in part explained in Gears Tactics, where you can use types of COG armour for your squads. Like Marcus wears a ‘Delta’ outfit, which is meant to be a suit for longer use on the front lines with extra room for ammunition. So although the armour must have its origins in the Pendulum Wars, it’s not specifically ‘the’ Pendulum Wars armour as there were more different sets with different purposes. I guess its use was relevant at the time and after the start of the Locust War the specific uses of these different kind of armours became less relevant, so all new recruits got the same kind of armour while the ‘oldies’ held on to their original ones.

Gears 5 when Kait is kidnapped by the Snatcher and we first properly hear Queen Myrrah. That as well as when you’re in Mount Kadar learning her history and that of the Locust. 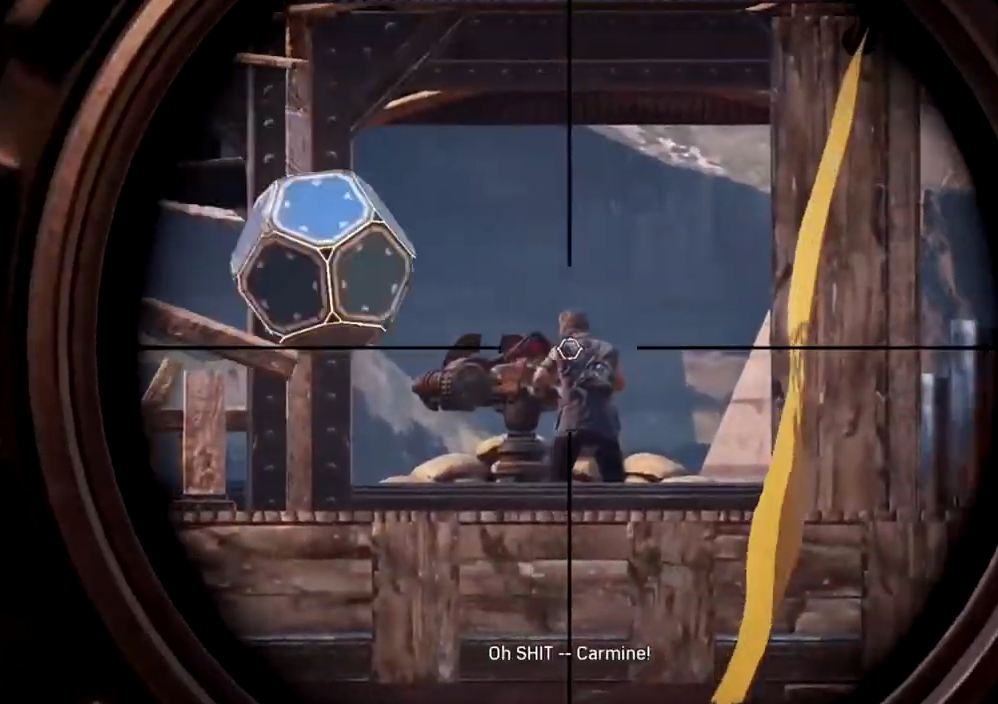 Moments before a disaster

He could’ve seen that pod coming and react to it. For all that I hate TC still killing Carmines for little reason, Gary kinda had it coming with that one.

It doesnt really bother me. Every gears character is gonna die eventually. On screen or off. I enjoy them killing off the carmines because some people, not you particularly, get really upset about it. Like really really upset. Lol

Well I really didn’t care much about Gary. He just showed up on screen for a second, walked off and got smashed by a pod. If they hadn’t named him as “Carmine” in the game, I literally wouldn’t have noticed that he was.

It’s the immediately killing off promising characters, which Lizzie was one of, just because they have a certain last name that really ticks me off.

I liked the idea of a outsider Carmine, I would’ve loved to see why Gary differs from his family in not keeping up with military tradition. An argument between Clayton and Lizzie against Gary would be something I’d pay to see.

I know Carmines are supposed to die and all but they have been with us since the beginning, I think they deserve some sort of story.

Even clones from the clone wars got more story then some of the Carmines and they died quick too.

If Clayton ever dies I’ll have to take some time off work.

Didn’t actually respond to the thread question itself.
Mine would definitely being told to get somewhere by the other characters in an allegedly “open world” game. I miss when hitting the back button made Marcus tell everyone to shut the hell up.

Jinn gets hit by a small train

Niles rolls away from Del at breakneck speed

Niles, before being torn in half

Just so there’s no confusion.

I miss when hitting the back button made Marcus tell everyone to shut the hell up.

Just so there’s no confusion

Ah, thank you. The one person that was reading my message wondering why Jinn gets brutally murdered on three separate occasions definitely appreciated that lmao.