Exclusive comic / novel characters they would like to see in games

We already had jermad, sraak, and vrol, and we’ve also had comics skins of characters that are not exclusive to comics, like captain hoffman, c company bernie, vold raam, and crimson skorge, so what comic character would you like what will they add to the game in this installment or the next ?, I could name examples such as Pad Salton, Jonathan Harper, Bai Tak, Draper, Carlos Santiago, or the Chadler

I would ask Helena only if her base skin (ok or some alternate --") is tomboy Helena, I think it is one of her best aspects, and one of the ones that I would like to have the most, and well, I also like tomboys, I guess that influences °^°

Another who is not very popular but I see that he has the potential to be a good character, is captain paul dury, as far as we know he is the second known leader of the onyx guard (I would not be so sure, from the death of loomis to the appearance de dury literally spends the entire locust war, more than 15 years, maybe there was an interval between loomis and paul), in the comic he seems someone quite important, and his face is very recognizable, he is supposed to be, along with keegan, a survivor from azura (I think hoffman confirms his survival in hivebusters) and, even though I don’t know if he could ever be relevant to the story again, unless he’s the new hoffman (the old veteran high command), at least it would be great to have him in mp , it’s always great to see more onyx guards

Lahni in her white beach dress. That’s all.

I wouldnt mind this at all.

That’s the one. Even better if they cover everyone of Scorpio.

Keegan in his dad clothes would be kinda funny lol

Hey, at least he’s wearing a shirt this time.

I would love to see Jonathan Harper,

My final request would be Will Carmine, his armor reminds me of Clayton’s but I still think it would be cool to have him in game.

Pretty much the ones you said. Carlos, the Strouds, Tak, Harper. Maybe Marcus’s mom too, cuz why tf not?

Other than that, maybe Captain Quentin Michaelson from Gears 3 since we really didn’t get to see anything of him.
(Bottom two Michaelson pictures are from Domitia_Voralla on Twitter, btw)

Also, maybe some of these chicks. They’d go great with an Alex Brand themed pack or Operation or whatever they decide to do in Gears 6.

Here’s one dude I’m surprised never made it into a game thus far, but uhh: Nassar Embry.
He’d make for a sick General reward skin. Or a reward for a crazy medal or achievement or something.

Also, back to Carlos for a sec. I wouldn’t mind if they reused the face from Omega Dom & just slightly resculpted it for Carlos. I never thought it looked a whole lot like a young Dom anyway. Especially when you compare him to the Gears 4 Commando Dom.

As for the Locust, we’ve pretty much gotten everybody.
I mean, there’s this one random ■■■ Kantus with a scar. Obviously, he’s not unique to warrant his own Character slot, but he’d make for a cool Kantus Skin if he had his own unique armor/robes.

Lastly, there’s Ketor Droak aka Droak The First. As his name implies, he was the first High Priest before Vrol & Skorge. I don’t think the comics ever actually show what he looks like, though.
So, there’s that. I think that’s everyone for me.

I’ve said it every time this topic comes up and I will say it again now… I want Miran Trescu so bad.

I remember seeing those photos of michaelson on Twitter, I loved that design, and more with the ncog symbol on the chest, I always wondered why Prescott’s armor in gears 3 was so different, I mean, there are many unique armor but the one from Prescott is too different, it does not even have the characteristic plates or anything, and it would be great if that armor was an armor aimed at high command of the cog, such as generals, admirals, or in this case, the chairman, also that of loomis has a little resemblance so it would look great in my opinion, and i also wish i had seen more michaelson 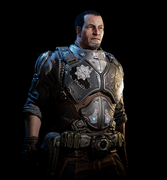 the gbl girls also have pretty solid designs, and i agree they should come in a bundle dedicated to gbl, similar perhaps to the tactics bundle

With nassar I also think it would be a great general reward, or classification, maybe they just remove the layer because it could give problems when running, it seems to be bigger than the crimson skorge so it would surely give problems, I also remember that in judgment they made a model of embry’s armor for a section of the campaign, so it would not be impossible to see one of the allfathers at last in mp

I remember that Carlos had a more different face than Dom, in fact his face reminds me a lot of V-day Dom, I think it is because of his beard, so maybe that face suits him better, even so he could have 3 different skins, that of c company, that of a cover where he is with marcus, reminds me of those “delta” armor from tactics, but because of not having sleeves or much protection on the arms and only having a pair of shoulder pads, and the one he used in aspho fields, which is barely seen on the cover of the novel, but hey, it’s there, worse is nothing 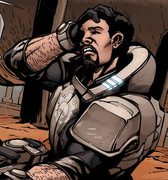 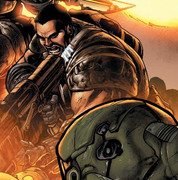 Regarding the jilane kantus, along with the scar, they could also give him only the original color palette of the kantus of the classic games, it was blue with gold, and he likes the current palette of the kantus, it combines a lot with the rest of the Locust , but I can’t forget the old blue and gold kantus either, it would be a good tribute and a good way to make that skin unique, and since we are hopefully giving back their hands soaked with blood to all the kantus, I gave them a touch intimidating, and its absence is not that it ruins the design but if they return it it would summarize a lot to this 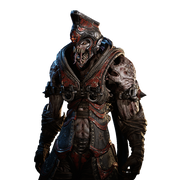