Everything else wrong with Lizzie's Silverback (no, not that)

This is not related to the Silverback Server Crash. Please keep discussion related to that bug in the other thread.

Lizzie’s Silverback Crash has been fixed in Title Update 4.1, but I’m hoping fixes to two other bugs can be investigated soon. I have submitted bug reports and videos for these and have received ticket numbers for both. In my bug report I included a link to this thread for additional videos to assist with determining and fixing the bugs.

As you can see in the video below, the Tri-Shot deals damage but when switching to Mulcher;
A) The Mulcher deals no damage
B) Cooldown increases
C) Ammo does not decrease 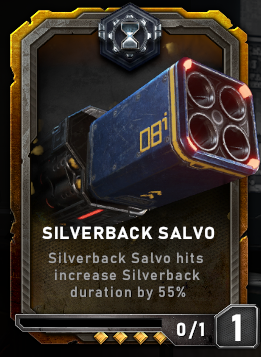 Now I’m no math whiz, but I’m sure that 55% is more than half. This increase (BEFORE image left, AFTER image right) is nowhere near half, and is far closer to 0.55%.

More videos can be found here and I hope they will help with investigating the bugs.

Isn’t that why it’s a legendary card though? In it’s current 0.55% form, the card may as well be blue/rare.

55% of the whole duration is a lot, and you only need to get a hit of damage, which isn’t that difficult with a Salvo usually.

Plus the Rifle Feedback for Marcus, an epic card, works in the same way to the Salvo card.

I’d say the Salvo duration is pretty decent. Particularly when you hit clusters of enemies with it, it makes the Silverback last a LOT longer.

Damage wise, not so much. Mostly good at clearing up Drones or if you want to hit a Warden with it.

Yeah, the Salvo card is really good where it is right now. Having it at 55% of the duration would be OP.

The limited ammo reigns it in though, and I think that is the point of the card. It would be OP if it had an extended mag like the Mulcher, however as it is you only get 20 shots/opportunities to extend.

As you put it, either the skill or the card is bugged/incorrect. With the current trend of taking things away (MPXP) I don’t want to tempt TC into another nerf

That’s been there since Lizzie release.
To prevent that just do a single click of the other weapon you are going to use,don’t full spam ammo,just 1 click and then you can shoot fine.
Consider it like changing from weapons on your character,like lancer to gnasher.

Even maxed that card is no big deal,still useful if you do constant damage,like hitting a boss,it’s like stopping the counter in the Silverback.

That’s been there since Lizzie release.

I’m aware of that (and the workaround), I was just too lazy to submit a bug report until now. Would appreciate a fix from TC

I hope it helps everyone else that runs into the bug though!

I may be incorrect, but I thought it just stopped the timer. My card is at 90%, but don’t use her in the current state. I fired two shots with the Salvo and clicked back to the Mulcher, then back to Salvo. I really just used the Salvo to extend the Mulcher time. I guess you can try that technic to make sure. Ammo capacity for all guns in this game are too low.

Limited ammo for the Salvo and Tri-Shot is what stops those skills being OP and instead keeps them balanced. As it is now, you are forced to choose only two of:

How exactly do you run out of Tri-Shot ammo in the Silverback before it ends? They give you FOUR times the amount of the max capacity of a Tri-Shot in the hands of a character, 560 shots. I have never even gotten close to using it all.

And the same goes for the Mulcher. 1,000 rounds is 4x more than the 250 for the one held by a character. And the Mulcher is also the option to go for to maximize your damage, rather than for more ammo. It just has more due to a lower damage per hit than the Tri-Shot(and is less accurate at range).

Hey you’re right. I must have been confused by the fact that you can only shoot 5 times before the cooldown hits

Oh, alright then. Well, you can probably fire more shots with the Mulcher than the Tri-Shot before it overheats and would perhaps run out less quickly, but I haven’t gotten to a point where I would run out if ammo. Just have way more than ever needed. Also haven’t really figured out the specific numbers for how much damage each weapon can do at most either. But with the bleed and increased rate of fire the Mulcher is probably superior in that regard.

I don’t know if this has been fixed yet:
The mulcher overheat time is about 100 bullets,but if you have tri-shot equiped in the other arm,you can shoot 200 bullets before overheat.That’s enough to destroy any boss.

And how exactly is that wrong when JD has an instant nuke button that will insta kill almost anything AND an extremely OP weapon in form of the Lancer GL?

That might be true on Elite to Incon with More Health off. But on Master, the Artillery Ult doesn’t one-shot Boss. Mini-Bosses are exception.

Well, maybe, but it still is a nuke button for Guardians, and will almost certainly kill a mini boss or take almost all of the health off. Also doing tons of damage to a boss as well through bleed.

The point quite simply being that while JD exists I can hardly see the point in calling it “broken” that the Silverback can kill a boss with the Mulcher + Tri-Shot combo(which is unlikely to happen on higher difficulties with the health mod on, all by itself it won’t kill the boss) within the overheat cycle of both weapons.

Excellently put together fingers crossed this can get in front of TC.

Instead of “No Lizzie” in custom hordes we should put “no JD,the Destroyer of worlds”.
Seems somebody have a trauma with Jds,I understand,I don’t like them either,or those engineers that control all the map with defences.
I end thinking like "My weapon is useless… I’m useless… the whole world is useless!