Esports is getting REALLY desperate for Views

Phase 2 is upon us! You all know the drill. New phase, new rewards! Don’t miss your chance to collect the Black Steel weapon set by tuning into the Pro League broadcasts Tuesday and Wednesday each week, starting at 5 PM ET (2 PM PT, 4 PM CT). Skins...

wow, Black steel, tell me it isn’t so… I know I will try and get them all, but interesting to see how they do know what people want the most after all…

They look any good? Everything to do with gears just isn’t loading for me even this forums slow

You’d have thought it make more financial sense to sell them in the store.

There’s an image on Twitter, but it looks like the official Gears site is down (as well as their servers) so I can’t read into this in any more detail, or if there’s any other images within the link.

EDIT: The link to the official site is up now, so it shows images of most of the weapons (the Lancer, Markza, Hammerburst, Overkill, Enforcer and Gnasher are not shown, so maybe they’ll be playoff rewards or something?) as well as point requirements. Looks like they’re capping the maximum number of points that can be acquired, and points will be reset.

That went out the window a long time ago and they made sure to hammer that point in with the Leaderboard-exclusive CS.

They look any good?

Chrome Steel but black. So yes. No reason not to sell them though ( besides fishing for Views obviously)

Haha I noticed the forum running pants too.
Thought there was an issue my end, I guess not.

There are images for the 13 weapons that will be available.

That includes loadout-weapons though so either they release the full set next week or nothing at all.

Glory Loadout weapons were still purchase-only back in Nov/Dec.

They look exactly the same as they looked in gears 4 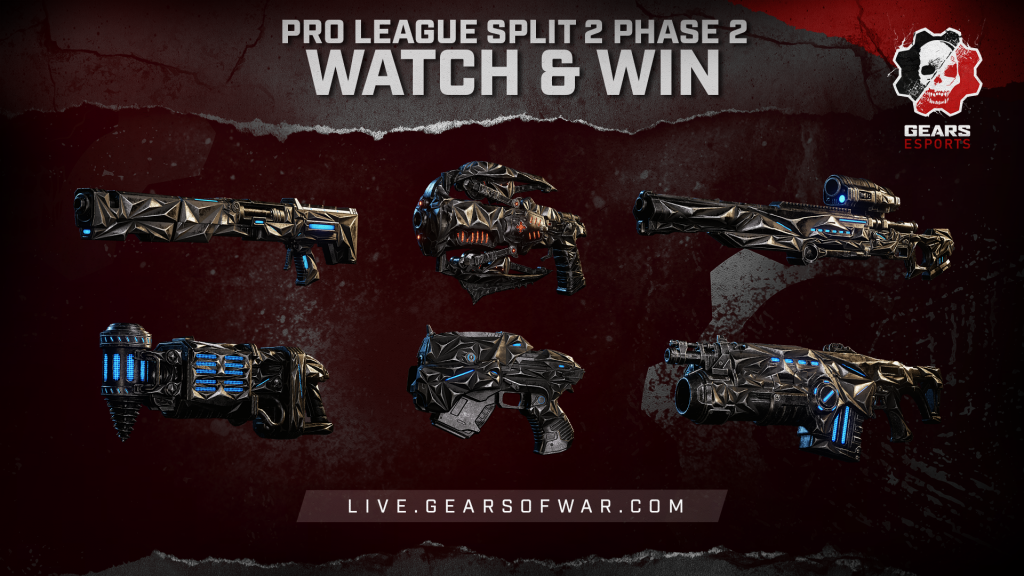 “You MUST have the window you are viewing on open in order to earn points. You will NOT earn points if your browser is minimized.”

Ahahahaha! You WILL watch our show Mr Pepper, and you WILL enjoy it! Next thing, we won’t be allowed to mute it!

You’d have thought it make more financial sense to sell them in the store.

the game/studio/publisher isn’t in any need of financial support. they need viewership and eyes

Any chance of this being an April Fools joke?

Well, if what TC say about eSports store items is true, then it all goes toward the eSports program - supporting teams, running tournements, prize pools etc. It’s potentially a fairly big sum of money to lose out on, but hey, I don’t make the decisions.

Just realized when this was posted. TC got us good.

they think a better way of promoting the esport is to hand out these skins to viewers instead of charging for them. so those costs are probably already covered, it’s just more investment into the scene.

they needed a weapon set to give away and selling a Gears 4 set on the Store could be seen as pretty greedy. this is why if they do characters it probably wont be for cash either.

I thought you were kidding, but it’s actually there, lmao. It has to be a joke.

Sad thing is, it’s so outrageous it could be true!

Only 1 way to find out :
@TC_Shauny Dana said a while ago that Black Steel wouldn’t happen. So what is it now? Was he lying to us? Is that post supposed to be a joke?
Do you guys have any clue what your Esports-division is even doing most of the time? Cause I constantly get the impression you don’t.

its not. they tweeted the same thing a few weeks ago when the Team Phantom skins were being sent out

Glad I got 3 monitors . Guess I’ll just turn one off then.

Alrighty, I'm now away until Tuesday for Easter! Have fun everyone! TWIG will go live on Monday as per, and have yourself the best Easter! 😀
1 Like
next page →