Escape From Kadar Blademaster Only

The past 2 days @WickedlyInocent, @Ultra_Gnasty and I were trying to beat the Horde Mode : Escape From Kadar with only a team of Blademasters. I knew this challenge was going to be hard being that theres alot of pipe drones and frag grenades being thrown at you that can either instantly kill you or down you. Shoutout to @JtothaROC for finding the lobby and helping out with the challenge. We failed one time and they stayed in the lobby to try again and I respect that.

What we didnt know was that TC put a little surprise on wave 6 that wasn’t in the game mode at the start of OP6 when the event first arrived. Starting at wave 6, and every wave after, there are Locust Hybrids that carry Cryo Cannons and there are alot of them. Waves 6 and 8 have a Matriarch thrown in the mix with Hybrids carrying Retro Lancers. Cryo Cannons, Gnasher Hybrids with the tendency to throw grenades way more often than regular grenadiers, and Sires. On wave 10, there’s 2 matriarchs at the same time on top of alot of the enemies that I just listed.

This was extremely difficult to accomplish and ,in my opinion, staying alive in this gamemode as Blademaster truly shows a players’ ability to play the class at a high level. Theres mostly enemies that one shot you, theres alot of taps but the power they give it out is low and the enemies don’t drop that much power so every piece of power counts and needs to be used correctly.

This post wasn’t made to gloat or whatever I just thought it was a pretty cool and difficult challenge that my friends and I accomplished and wanted to share to the forums so if people wanted to see a crazy and hectic gamemode as Blademaster they can watch these 2 videos. If anyone is looking for a challenge or to test their skills as BM I recommend trying to get in a lobby for Escape From Kadar. It doesnt have to be a BM Only lobby or anything, being the only BM will be a good test as well.

This video is us on Nexus. This took use 2 or 3 tries i think. Just for this map though. We tried a few different maps all day yesterday and just couldn’t get the job done. 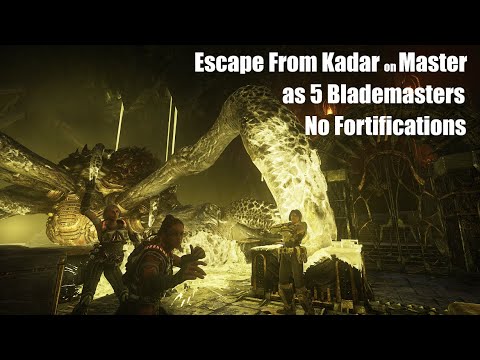 This video is on Village and we luckily got very good taps to help us for this one. We did this on the first try today. Ultra just randomly said let’s try Village Kadar and we got it first try. 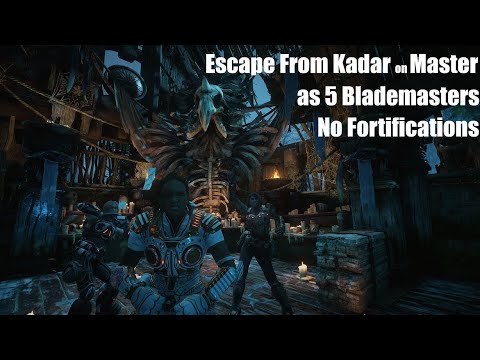 I’ve never played that horde mode before and had no idea what to expect.

It was wild from beginning to end and I always appreciate playing with talented people.

Thanks again for hosting and letting me be part of that crazy ride.

I hate the Cryo hybrids so much lol. Instant freeze is such BS, but it’s a challenge I will overcome with practice.

Also, having an enemy bleed used to allow me to survive a pipe swing, but now it doesn’t. Oh, well ill just have to watch my 6, 7 and all other numbered directions lol.

I tried my absolute best to never be more than 10m away from a tap. The stim from Energy Surge is a must have for this gamemode.

Sometimes when you’re fully healed and then walk into the range of Energy Surge it will take awhile for you to get stim but if youre actively fighting enemies next to taps you’ll get your stim back immediately.

The stim from Energy Surge is a must have for this gamemode.

I saw also that your build was with short range deflection and brawler. In this horde mode the health of enemy seems higher (killing sires seems to require more damage than in horde frenzy)
Is it the reason why you did not bring bladedancer card ?

Yeah i switched Blade Dancer for Short Range because I found that the Retro Hybrids were downing me once the double damage kicked in. With Short Ranged it happened less often.

It may seem like it takes longer to kill things because i couldn’t get my bleed damage to 10 until way later. I like to keep some power on me in case some one dies and needs a mace, if I die and need a mace or if I need more flashbangs.

I had no idea you switched cards on Village. I still kept Blade Dancer as usual. Also, I can’t believe we beat it on the first try lol

On the Village Frenzy after the EFK Nexus, how did you guys down the Kestrel so fast?

I was looking for a ranged weapon to pickup and it was down.

You seemed fine with Blade Dancer. I was playing kinda passive. I almost never was away from a tap past wave 6 so I opted in for a little more damage resist from the Retro Lancers. I was able to kill things with the usual Reverse 2 Piece into a melee combo but im sure you were killing things way faster with Blade Dancer which whittled the waves down faster.

Must be the mighty Claw. No other weapon comes close to it.

Jokes aside, using a Cryo against a Kestrel when it’s within range is extremely devastating against it due to the added damage, so long as it doesn’t shoot you to death trying to freeze it. If it’s not that, assuming that happened in a lobby of 5 Blademasters, then I’m just as clueless.

As for the challenge itself… I absolutely would not have the patience for it. Most of the things that I hate the most on enemies all combined into one thing? That’s just asking for me to want to ragequit. Or something else that can happen when frustrated/annoyed. Congrats, I guess. Both for doing it and having the patience to put up with that.

I know your secret.

Not much BS with these kind of enemies in this event. Either they kill you legit or you kill them legit. The only BS that happens is the ghost melee and we all know how annoying that can be when it gets you killed lol

It’s ok. I wouldn’t want to ruin a secret. It was pretty impressive though.

There’s a glitch with Striker that allows him to kill Kestrel - and anything really - in a matter of seconds.

Could also be how he got over 2 million damage in one wave on the Allfathers daily, and I just assumed he was playing legitimately.

You are correct about the glitch. I also forced one of the bosses on Allfathers Arena to spawn right next to me. The force spawn also works on Blood Drive and probably on River too. A Tactician was planting grenades on one of the spawns on River and a Carrier spawned on top of the fabricator. Poor random who stood next to the fabricator didn’t see it coming.

I don’t know about any glitches really except the one you showed me lol.

The problem with “glitches” are if you talk about them here TC will find a way to fix it while ignoring bugs that affect the player negatively.

The secret is out