Theres an incredibly aggravating glitch involving the Dropshot (from Scions or yourself) that if it rolls off a wall you die instantly if near it. Will this ever get fixed? I can see TC has updated things like Outer Wilds Kaits 4 strands of moving hair but this glitch has been around forever and makes me want to jump off a cliff.

The absolute only thing that annoys me about the dropshot is when I reload and have a good few shots left it acts as if there is no ammo left at all and then I have to put it back on the locker to reactivate it.

As for the OP. It has been a problem for so long it is no longer a problem and I am only speaking for myself. It kills me the odd time but when it happens I run like hell to get out of range.

I’m thinking the homing ricochetting Drop shot round is intentional.

To the other guy talking about the reload glitch, have you tried switcing to another weapon and back when that happens.

I know that it still doesn’t address the main problem with the bug.

Or the glitch where you can’t see your HUD properly unless you die.

Or the glitch where you can’t use a turret unless you die.

Or the glitch where you cannot pick up a WL weapon unless you die.

And many more that have been in the game since, well I don’t know, launch? What’s that, nearly 2 years?

And now do you realise the difficulties we face daily when we come to bug fixes?

“Ok the War Machine speedrun has been patched, but I still have times where I can’t use a WL, or worse yet, not have the proper HUD to play the actual game.”

That reminds me, I have this one clip of me getting headshotted…from my own dropshot. Happened in versus almost a year ago. I can post the video here if anyone wants. Can’t deny it was a funny WTFable moment for me.

sometimes when it jams you will see a yellow blinking light at the end of the dropshot that is probably intentional. someone probably jumped in front of you, other times are probably not . sometimes when you switch to another weapon you look down and you have no weapon . one time i ran around for several rounds with no weapon until a weapons locker could be purchased. the other item not mentioned is when you are at the weapons locker and you remove a weapon and it holds you there for a while.

I’ve had the reload glitch happen to me a ton of times.

Switching weapons has never fixed the issue for me. Only time I’ve ever noticed it happening to me tho is when I’m playing heavy and using the increased reload speed card. I only have it on a 30% increase.

switching weapons has never worked for me too. i use the increased reload speed card also hmm

I know this is kinda off topic

I wish TC would make it possible for you to DOWNGRADE some cards. I know the scrap/credits would already be spent. But give me the choice to go back to say a 20% speed because I didn’t like the 30% speed etc etc. I know that no one would ever downgrade damage cards but some of them I would like to downgrade.

i would prefer that they let you play it at any level you had attained… for instance i had maxed out my auto turret speed card amd then they changed how the turrets perform. it is kinda on subject because i thought the dropshot used to have a longer reload speed.

Sure! Mind you, this was more than a year ago and I just wasn’t very good ‘at the time’ lol. But yeah…don’t think ive ever seen anyone else headshot themselves in this game. 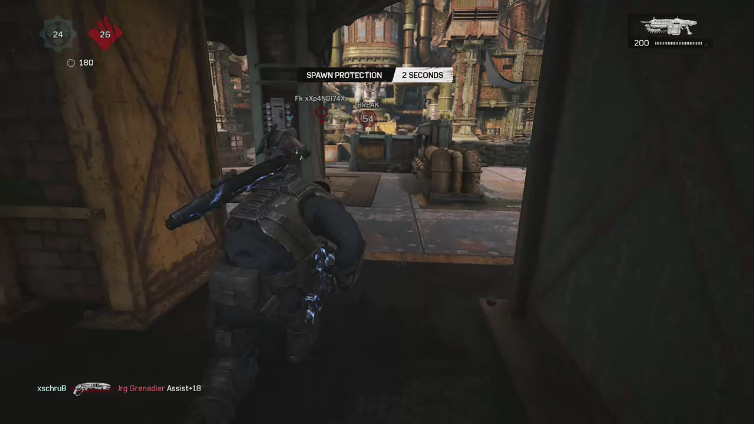 Yep I agree. Some the cards just become useless because they are a waste at the level they are at.
Give me some adjustment. Lol

Like the soldier mag size card. I like having the bigger magazine size. But the mag is so big that you never get to use the active reload boost - if that makes sense anyway

Dude I’ve done that a million in horde. It’s usually when we are all busy slaying in the waves before a boss wave and someone jumps in front of you - I have the boom shot or drop shot - and you straight up hit them in the back. It’ll either kill or down you but won’t hurt them at all lol.

I always tell them - “hey I’m standing infront of these sentries for a reason. Killing nuisance enemy’s can be a ■■■■■ with an explosive weapon if they get in close. If ■■■■ gets bad try not to jump infront of me”

i guess my preferred approach would be to keep the value of the card you have earned. using the mag size as an example. they let you attempt active reload at any time

Oh yea. Totally understand. Larger mag is better but I think level 6 is too big. I never reload it often enough to keep the whole mag in active rounds (If that makes sense?) it over doubles the capacity. So you went from 60 rounds to now 132ish? (If I understand that right)

But like the reload speed. I’d go back to it being slower. It’s a level 4 now and I think it’s too fast. Almost impossible to get an active with without jamming the dropshot. (In game jam not glitch jamming)

But every time if had it glitch jam - I’ve had the speed loader card in use and has to put it back on a WL to fix it.

I’ve done it and witnessed others too. Usually it was due to a ricochet in close quarters (wall or overhead) and high aim.