Drop some of your unusual in-game screenshots or videos

I was actually Fahz, lol

Gotta love those texture bugs where something looks like there is no light reflecting off of it, or the frozen character at the end of Escape.

Fourth pic had me thinking I was looking at shattered glass until I noticed it was the shower door with an explosive blast mark on it.

No pics immediately at hand or I’d be throwing one in here too.

Would pay for that frozen lahni skin ngl

Look at Mac…,when he was beautiful

I’ve seen the MVP not being in the middle happen quite often.
The weirdest thing I’ve had happen, was an empty chopper, just the camera following thin air into the chopper and the door closing with nobody standing there.
Happened with Kait as sole survivor and an Ice Scion as he froze me, I crumbled and it bled out on the platform. No pic, unfortunately…
Ghost characters not actually being there happens quite often too.
Like this one, it might not look peculiar, but there really isn’t any character there.
Thief000’s Xbox Gears 5 gameplay. Find your Xbox One screenshots on GamerDVR.com

Fourth pic had me thinking I was looking at shattered glass until I noticed it was the shower door with an explosive blast mark on it.

It happened on The Clock. The Salvo Scion shot a rocket from the other side where it normally comes from, and it perfectly landed there, lol.

Look at Mac…,when he was beautiful

It’s just NO way they purposefully made Mac look like that either, lol.

And my favorite screenshot from campaign:

I decided to share a Clip for better understanding of what’s goin on: 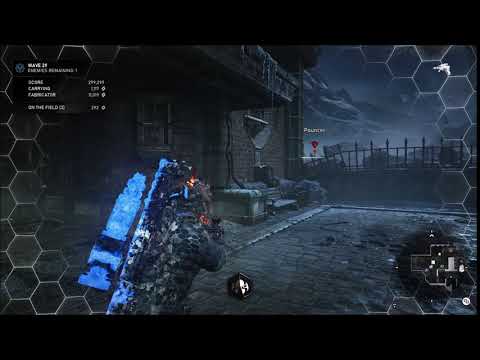 Had that happen with a Sentinel once, hilarious to see.

a Sentinel taking the Train? daaamn

That second screenshot is epic! lol.

@xXRealkainXx the more impressive thing is your quickness in that tag! Nice!

When you post you can see an image icon, you just need to press it

Gilded Mustache Keegan. All for the low low cost of 500 iron.

Don’t forget the Collector’s Variant for 2000 iron. With no change of course!

clearly Pouncer was just trying to cuddle with Cole Train