No idea, but I saw that video on Facebook and looking for an answer

I made a post about this myself a few days ago. I YouTube and Google it with no success.

I can’t find nothing either.

I was in there once! It was wave 50 I think. Right as the Swarmak was killed, the place opened up. Very strange.

We left the last guy so we could have a good look around. Sadly they didn’t have a Street Fighter II machine.

Street fighter machine would be cool. Brings me back to the OG Arcade days in the 90’s!

i was there once, door opened on wave 48, we thought the door opened after one on our team got killed right by the door by sentinels but not sure tbh, room inside is pretty cool.

I demand this information.

I don’t think that you can get in there, it’s just scenery, good detail for the map

There very little available from searching. It’s either incidentally opened, or someone thinks that’s hiding the info is cute.

I searched all over the map, inside and outside, trying to see if there was a hidden secret that opened these doors. But no success. Throwing Boomshot and Dropshot rounds at them didn’t do much either, nor did pushing the fabricator against these doors do anything. Either I missed whatever triggers the doors opening or it’s something that randomly happens. Maybe the keys lie around somewhere?

My friend said he got in there I called B.S. but I just joined a match in progress wave 32 and they have their base set up in the Arcade. They won’t tell me how they got in there but go to my Xbox account ZIPxTIDE and look at my captures, I recorded a video!

I just looked it up. That’s insane. Awesome easter egg.

For those that wish to see it, here is a direct link to his video. 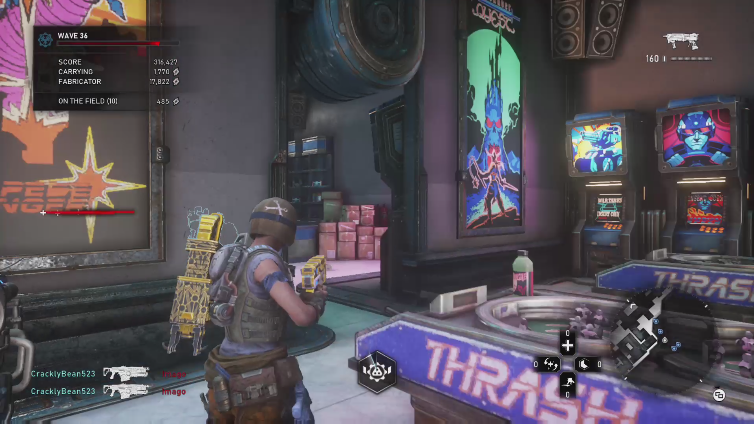 Just watched it, that is cool. How awesome

Hit me up. I’ll play. I would like to know too. Thanks!

Holy sh.t that’s awesome! Would like to get this info as well.