one sentence crossplay and the pc killed the game.
make sure that the mouse and keyboard cannot be used.

Get a mouse and keyboard for your Xbox.

You’re putting yourself at disadvantage. Therefore, you’re not as good at the game as you think.

one sentence crossplay and the pc killed the game.

I mean it’s not like the significant drop in quality in the content being put out post OP5, Unfun gameplay in PVP balance-wise, being an Xbox game in general, Halo Infinite being released, horde being a complete snoozefest if played normally and people not wanting to do new things in it, the tedious grind to get to level 20 for 19 classes in PVE, and no more escape hives had anything had to do with Gears 5 being unable to recover from its disastrous launch. 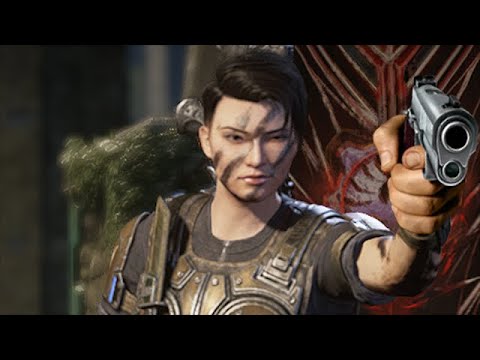 I deliberately set the game at 30fps despite everyone else playing on 60fps and higher, play on controller, and still get at worst 20+ kills per ranked FFA match and won a couple games with this handicap. Maybe the problem is you.

one sentence crossplay and the pc killed the game.

By definition what you’ve written isn’t even a sentence.

Mouse raises the skill ceiling, but as far as being an instant advantage with every weapon…yeah, not exactly. There’s a learning curve, and different people respond to it differently. I actually found the Gnasher was the most instant improvement, which is not what most people assume.

The most obvious advantage is being able to fully separate more actions. Movement gets easier though not necessarily better at the highest level.

There is an argument to be made that TC should move away from the controller-centric focus of the franchise. More shooters are played on mouse and keyboard than controller, and playing a game with a higher skill ceiling and effectively no aim assist is more competitive provided most people are using the control scheme.

Still, I do still enjoy playing on controller, and I understand that in the case of Gears, that’s what most people are accustomed to, and the franchise has a history using it.

That video thumbnail. She’d give Anya a run for her money!

I made a gif a while ago specific for those complaining about losing to PC players. Give me a second…

I always felt like movement was encroached with in kb and m. Never played it though.

I tried keyboard and mouse and found it extremely difficult to get used to. I can see the advantages if you get good at it.

If you can perfect it, you deserve the advantage

Why does this have to keep circling back around? Just search for the 100’s of threads already complaining about this on the forum

That would require a minor amount of brain capacity