We understand players from both Consoles and PCs are experiencing major disconnection issues currently.

Please submit a Support Ticket to https://support.gearsofwar.com/hc/en-us with the words “Crashing”, “Crash”, or “Crashes” in the Title, along with a description of what occured that includes:

Edit to add: When sending tickets in, please mention which map and skins were being used at the time.

7 Likes
Game keeps crashing - Xbox One
Game crashes over and over
Gears 5 keeps crashing (PC)
Gears 5 Error, Freezing , Kicking me Off the game
And the Crash problem in Gears 5?
Classic Horde Crashing
Why do I keep crashing on Horde/Escape mode?
Error my game closes only after 2 minutes
Any answers or yet or
Crash again and again
Xbox crashes during horde
GEARS 5 CRASHING 30 times in two days ! on xbox one
The ban is not lifting! broken game
Fallin out from matches
Getting kicked back to home page when playing since this last drop WHY When will it be fixed
Banned from Ranked because server disconnected
I need to see if it happens to someone else
Ranked matches ban
Why do I keep getting kicked
Gears 5 hard locking/Freezing/crashing since classic horde was added. Smh
TC_Sera (TC Sera) Pinned globally December 2, 2020, 10:34pm #2
MCSS_Aerocoupe (MCSS Aerocoupe) December 2, 2020, 10:51pm #3

Question - is this for disconnects like server allocation errors, or when Gears completely crashes and sends you back to the Xbox dashboard/home screen, or both?

If it’s been happening recently, as in the last 24-48 hours ish, we wanna know about it.

Game crashed 6 times in the past hour. I might get a van because of it. I can’t even play a match without a crash in between lobbies

every second attempt to play this mode results in a hard lock of the game client during Matchmaking/Lobby loading up. game freezes and needs to be terminated via Task Manager.

for me. It started to happen only after the serverside update Tuesday

Some of us have been complaining about it and providing tickets. The fact we can only post pics makes it harder. I get that we can post videos on a ticket, but what good does a vid do on a ticket when No one acts on it, responds to it??? It would Be nice if we could post vids on these replies as well. This way the community can see it and not just a fake no response ticket.

I mean 15-20 crashes all in one day should tell you guys there are some serious issues. Especially since it’s costing players $ and ranks. It upsets other players who think you rage quit, people are reporting and blocking players because of the aforementioned assumptions.

Similar for me.
Every second attemp to join Horde Classic.
It freezes when the game found a match for me to join.
After one minute of a freezing state, it finally crashes for me.

I documented my experience with crashes since the game was launched one year ago and you don’t provide a solution yet or only replies like “does the title update fixed the issue?” or “did you update your drivers?”. You take a long time to answer.

Even I thought was a hardware issue and replaced the CPU, Motherboard and RAM, but Gears 4 and 5 are the only games with poor performance with huge stuttering and crashes, it only makes me angry for the lack of costumer support. Gears 4 issues was never solved and it seems Gears 5 will be the same.
Being kind never worked and the patience has gone.

This is my recent tiket:

On both campaign and LAN Versus, I can’t see the characters and weapons skins to customize or even only choose them, specially on LAN Versus, and it shows an “error loading weapon info”, therefore I can’t play with my desired character and weapon skin when I don’t have internet connection or I’m in Steam offline mode. It didn’t happend before, I think it was since Operation 5 update.
I recorded the issue: 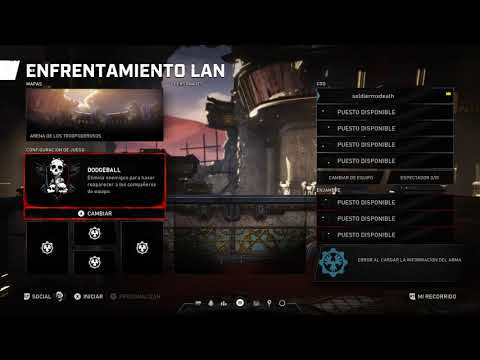 You can try It too unplugging the Internet on a PC with the game installed.
According with your info: https://support.gearsofwar.com/hc/en-us/articles/360033261831-Which-modes-can-be-played-offline-
I should be able to play but I’m showing you isn’t possible to get a optimal experience if even I can’t see the weapons and character info.
And with the other case of random crashes, there’s my info:

How many post and tickets with proofs do you need to start working on a definitive fix? the problem repeat, isn’t recent, It happens since September 2019!!!

Edit: I also posted a video showing poor performance, it supposed to run smoothly specially on PVP, but that micro stuttering every moment makes me angry

This is another ticket due to the same issues.

I only see this is still happening, you claim here: Gears 5 | Title Update 12 Patch Notes
that “Fixed an issue that was causing an increase stuttering and crashes.” and “Fixed an issue where players were experiencing gameplay hitches.” but isn’t true. Recently on any game mode I experienced these issues, and again I recorded It to give you a proof

And on campaign I get horrible fps drops for example on this area at 8:30:

And also when finishes a cinematic,all noticeable even without a fps counter like fraps or MSI afterburner, being annoying for the gaming experience.

It happened to me twice, when I was trying to type in the chat (using controller) while searching for a Classic Horde match/lobby.

It froze, and booted me back to the Xbox dashboard.

Same thing for me, every day between 17PM and 23PM in Horde, Escape or menu . I don’t continue to play Gears 5 until this probleme is solved. (Sorry for my english)

Not to be rude, but I’m only posting here. When I’ve submitted tickets in the past (as far back as March 2020) I have yet to receive a response. It seems pointless to submit tickets since no one responds or addresses the issues. I know that’s not on you, but just saying… it’s frustrating.

To be honest… it won’t go anywhere. Last times I’ve submitted tickets, they were never resolved/responded to. I know ya gotta send us to the right places, but it just goes nowhere.

I understand the frustration, especially with how poor TC has been in the past.

I do want to point out though that for every 100 people that posts about a specific issue on the forums, or social media, only a hanfdul actually make tickets, and that is what TC needs to properly investiagte issues.

since TC Sera has joined TC, areas like Gears 4 weapon skin crafting and EXP not working in Ultimate Edition have been fixed, and that is because they went through the ticket (and then JIRA) process.

Bug reports frequently don’t receive any responses anyway. None of mine have and I’ve been told that if a bug report gets no response, it was good enough that no further information is needed. But I’m not sure how to go about it to update existing tickets, as I’m not aware of any way to view existing ones as no account is required to submit tickets, if you find further clues to what might cause a bug(such as me reporting X-Ray bugging out and no longer showing enemy outlines which I at first thought just happened randomly but later on realized the cause may have been two players using the ult at a similar time).