Coalition, coalition, coalition, the guys who are still workin on gears 5 even tho most of the player base is gone, no one is watching your esports, the Mexicans have taken over, and halo has beaten the franchise to the ground. You know i thought that maybe with the release of halo infinite and how much people have been playing the Master chief’s collection, you guys would start picking up your paces, but nope y’all double downed. You guy’s bassicly abonded the game, and gave out boost cause y’all know the game has turned into ■■■■, and y’all can’t make a profit out of it. I would ask, or the community would ask you to at least give us the old school games with new graphics and quality to life changes, but y’all would probably change those games so much it would probably feel like a Saturday morning MCU cartoon with equally ■■■■■■ jokes. Coalition i think i speak for everyone when i say.

If you don’t know how to make a ■■■■■■■ gears of war game, or you don’t give a ■■■■ about the lore or it’s characters, or how it’s supposed to feel, or what your trying to erase. Please I’m begging you pack your ■■■■ up let gears of war die in peace, or give the IP to some other company in Microsoft who actually gives a ■■■■.

i think i speak for everyone when i say

You dont speak for anyone lol

GOW fans… the gift that keeps on giving.

I want to understand what you’re saying but it’s difficult when you use that tone.

I would ask, or the community would ask

Well which is it? 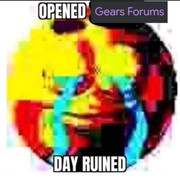 Some fan you are.

As in “abonded with this girl one time”

Wait… we are talking about the same thing right?

We want to foster deep discussions, whether it’s between fans or providing feedback to the development team.

We Have Zero Tolerance For Aggression

Aggressive posts towards the game, development team or other members will not be tolerated.