Changes to Dawn from Gears 4 to 5

The trailer called the changes made to Dawn some “tweaks,” but they seem fairly big to me. The bar in the top center of the map has changed dramatically. The room that juts out and overlooks the map now has some low cover on either side of the path to the stairs, and there’s a whole new area above that: 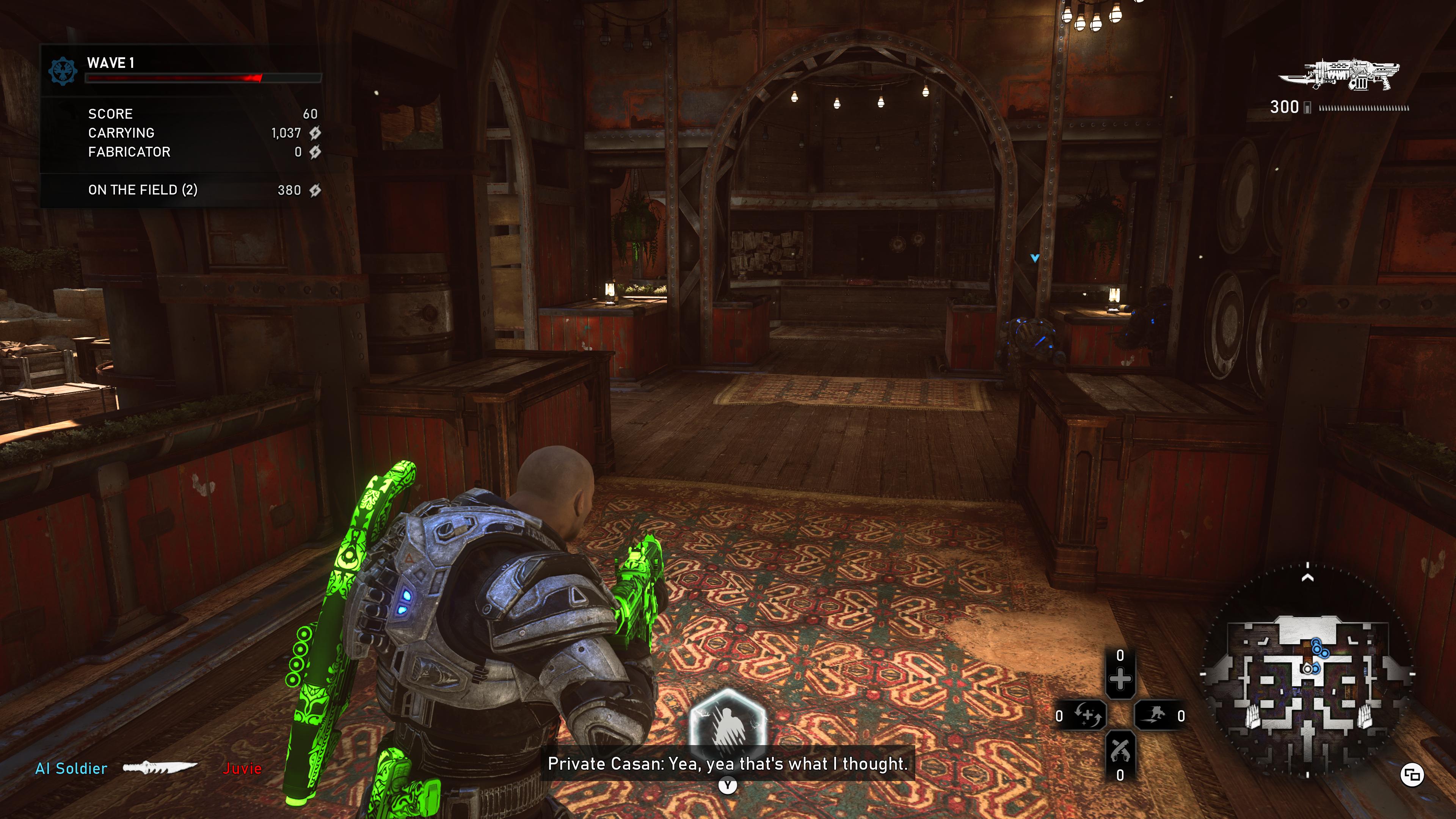 This new area has some ledges that overlook the path that leads to the bar on either side, with an opening for a one-way drop down (though Juvies can jump up it in Horde): 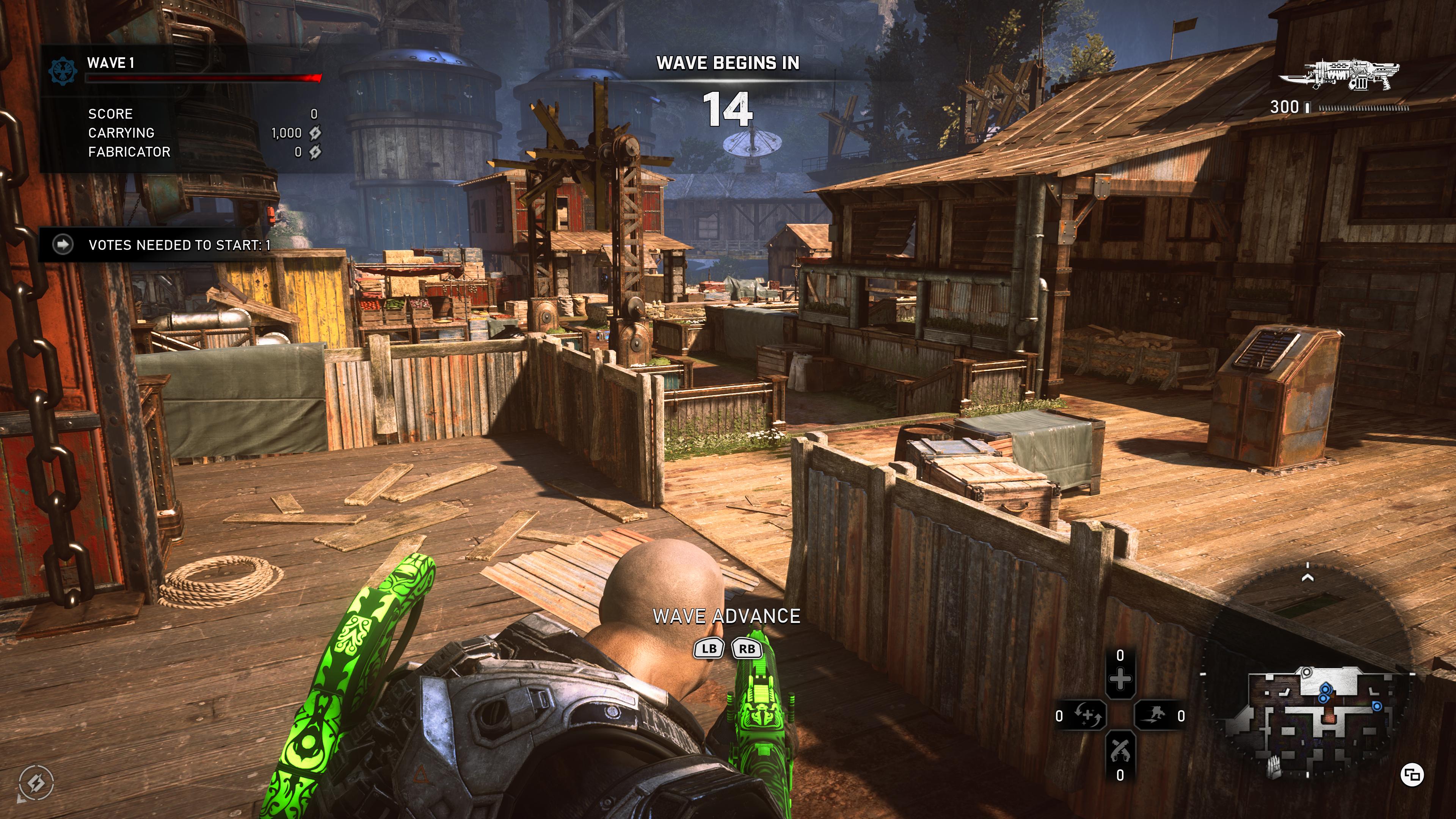 Dawn was already a good map for Horde, since both the top and bottom center and both spawns were all viable base spots, but the top center was probably the weakest option. These changes should make it a much more viable spot to set up. Here’s a video I recorded back in 4 so you can compare how it’s changed; 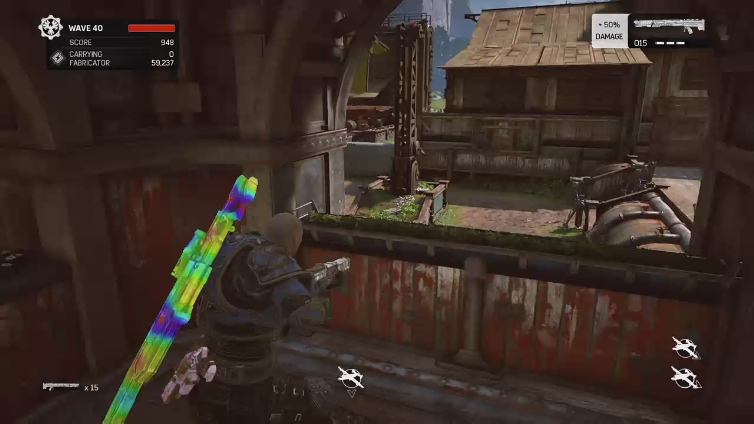 It was a great map in mp too, I wonder how the changes will be in 5 though. And how the tuning is now

The trailer called the changes made to Dawn some “tweaks,” but they seem fairly big to me.

This had me thinking they added a new trailer called “the changes made to dawn, some tweaks”

Wow they changed it for Horde. Once again they aren’t specific as to wtf they actually did. Could have spent ten more seconds actually explaining that.

I personally wouldn’t call it a huge change but I have only played the map once and the entire night was just getting pissed off and ■■■■■■■■■■■ by the game so I haven’t had much of an opportunity to form an opinion on whether this changes the location that much. All I could remember thinking is that they added it for some PvP purposes going over my head since I don’t play that.

These are certainly more than a few tweaks. Now we just need to figure out what they meant by “Dawn is back with a few tweaks and a new way to play”

What is the new way to play?

I’m not sure how this changes much of anything. To me this is a minor change to a single area of the map with little in the way of changing how it plays.

Honestly, even tho it’s a good,map, I wish for the last 2 drops, they avoided all gears 4 maps altogether and brought back something that was a real banger (the best rated and the most popular maps from each gears game from 1-judgment that wasn’t already in 5).

I know judgment maps would’ve posed a real problem for horde since they were either the more vertical leftover maps from gow3 or they were built with verticality in mind, but still, it would’ve been fun to have access to a handful of those maps. I’m thinking Rig (minus the chopper rides) would’ve been the easiest choice for them since it’s one of the most level maps, but I would’ve preferred seeing Gondala, Library or Streets in 5.

Anyway, I think besides the judgment maps, something I think they should’ve picked from the past should’ve been 2 choices from the following: Trenches, Thrashball, Artillery, Mansion, Fuel Depot, Azura, Depths, Jacinto, Overpass, Highway, Cove, Academy or Fuel Station.

I just think TC don’t have great imaginations and they prefer to take the easy “let’s grab a bunch of gears 4 maps” route instead of remaking fun/fan favorite maps. Sure they have amazing artists who kill it every time they make a map, but I would’ve loved to have gotten a bunch of the maps I wrote in this post over all the gears 4 maps that came back. Even if they put a new spin on any previous map (like how clocktower got a slightly new look in 4) instead of a 1:1 remake would’ve been 10 times better & more fun. Like checkout…. They couldn’t of made a nighttime variant with a hole in the ceiling, having rain or snow falling while a dimly lit store gave off a creepy vibe that was lit up by the various electronics throughout the store?? I know, 25 years later and the electronics still worked would’ve been silly, but it would’ve been better than getting checkout over and over.

I’m glad we got 2 maps for the op8 second drop instead of just one but still…. If this is now the last bit of new maps we’ll ever get in 5, why did half of them have to be a familiar map that is still fresh on our minds from 4?

I’m just rambling on now, but I just wish TC had more in store for us and went big with the last bit of content being stuff we REALLY wanted. Why they didn’t create a poll to have the community vote on the last 2 maps is also beyond me. Anyways, I know this is all a moot point & im just wasting my time with this post, but for once, I wish TC hit a home run with this batch of content and dropped a bunch of maps the community preferred over what we just got.

Don’t like how you can’t look from Torque through the front area anymore.

In Control, the ring is right under it so it would make sense to have a fight on top for top control. Other cover/ wall pieces seem taller than what I remember.

Still a great map though.

Had a teammate fight a few guys at the hill there. I was by the stairs, so I pulled out my smoke, went upstairs and planted it, and looked at the window and thought “guess I’m going back downstairs.” Needless to say, my teammate died.

Exactly, everyone fighting in one area doesn’t make sense. Need the high side to fight for something else, only useful on the side rings tbh.

Personally… I would rather have TC prioritize their maps over epic games maps. I love epic maps and all but I want to experience more of their maps, not epics.

They’ve only existed for one game while other old epic maps have been around the block more than twice. What they should’ve done is thrown all of their TC maps into 5 at launch.

I cant believe you want this horrible map back lmao.

Same. I love raven down and all but weve seen it like 4 times already. Give me diner. A banger that’s only been in one game.

Can I offer you a healthy serving of thrashball? Or Azura?

Azura is a definite yes.

Totally agree…. I’d rather all new maps in 5 instead of remakes/ports, but TC, as you know, launched the game with half the maps from 4, and they’ve added more since launch. If anything, what I was trying to say was that I’d prefer older maps from gow1-judgment instead of gears 4 maps, but yea, if given the choice, I’d want all new maps in 5. I can’t remember any other game out there that’s launched and used half the PvP maps at launch from a previous game like TC did, so yea, I agree with your statement.

They’ve only existed for one game while other old epic maps have been around the block more than twice. What they should’ve done is thrown all of their TC maps into 5 at launch.

Yes, if we had to get TC created maps, it should’ve been all at once and no other times as operation drops. Problem is that even tho we’ve gotten gears 4 maps only in one other game, it was the very last game…. and they’re TC made. At least certain maps like thrashball, trenches, overpass and whatever else were maps that were from 2010. They were maps that - not only were they not remade in a following game - they were from a game that’s 11 years old and multiple games ago. If the whole “gotta remake old maps” mentality is on display, at least it doesn’t feel cheap/lazy by remaking these maps, cause again, they wouldn’t of been pulled from the very last game that was released in the series.

I cant believe you want this horrible map back lmao.

Hey, I bet you have maps on your “I like these” list that are, in others opinions, just as bad if not worse.

Would overpass work in any other gears game (except judgment)? Probably not, but just like ppl have praised Sandbar (while hating on overpass) and wanted to see it return, it’s a matter of personal preference. I actually liked the map and had great times playing on it whenever it was in rotation during Stay Frosty. I know lots of ppl hated it (which is likely why it got pulled from rotation for a good portion of gow3’s life cycle), and it was even the map that contributed to me getting hit with the profile reset bug (probably due to the turret causing the game to freeze), but I still enjoyed it.

Give me diner. A banger that’s only been in one game.

I wasn’t the keenest on Diner in 4, but if they brought it back for 5 with tweaks to the kitchen area in Horde mode like Dawn got for the bar, that would be something I’d like to see.

the game with half the maps from 4

More like a quarter of the maps from 4, theres only 8 gow 4 maps in game.

it was the very last game

Which was a couple years ago. I’m not disagreeing with you on gow 3 maps, because alot are overdue for coming back.

Hey, I bet you have maps on your “I like these” list that are, in others opinions, just as bad if not worse.

Overpass is just a garbage map, bad for MP. And it would be awful for horde now. And you’re right maybe I do have some bad maps on my list but if they ever want to bring back overpass, it needs a big overhaul.

Maps trash too. But it’s pretty.

they wouldn’t of been pulled from the very last game that was released in the series.

Epic games did this too. The only reason I’m talking about gow 4 maps is because its TCs first game in the new series, I still consider them fresh but that doesnt mean some epic games maps arent “fresh” either. Like river, it’s only been in 1 gears game before. A perfect remaster.