Is card rarity in this game meaningfully representative of rareness of cards?

Beginning with the number of Common vs Rare skins. How is a card category going to be labelled Rare and have more total cards than Common cards? Should be more Common than Rare… 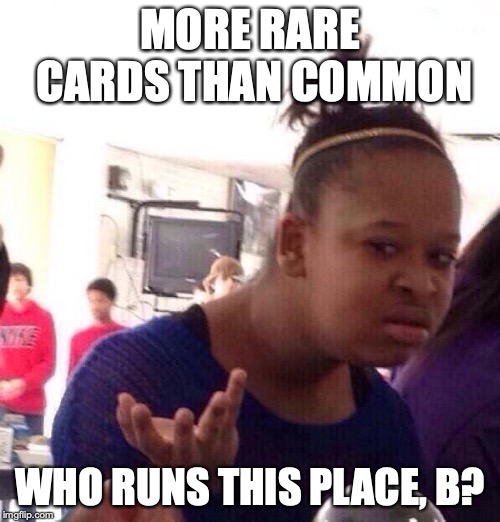 Epic skins are actually the most common in-game, but epic skins are limited to the starting load-out? Why? shouldn’t all eSports packs weapons not all Epic? You know that would be a lot better value exchange considering the scrap economy.

Legendary weapon skins…where are they? The last legendary skin was the pink phantom…really? Why aren’t the Aztec skins legendary? Or the Canadian omen…

OK, in Gears 5, what if rarity systems were dynamic and actually reflective of a skin’s in game rarity, PER WEAPON? Example: since nobody uses the New Orleans Lancer… the skin is updated to LEGENDARY SKIN and once everyone start using it again it moves to EPIC SKIN.

Not necessarily. Some “common” skins appear far more frequently than “rare” ones. For example the likes of the Sugar weapons, appear very often but we’re talking about the same 14 Sugar weapons (one for each weapon).

I guess the idea of having more “rare” cards overall, is that it’s statistically harder for a player to get them all through opening packs due to the RNG nature of it. If we used your screenshot as an example, if there was a specific “rare” customisation card you wanted, the odds would be 1 in 1106 every time a “rare” one drops, even though any one of the “common” cards is more likely. Because you’re limited to 5 cards per pack at most, with each pack you open the odds start again. What you got in your last pack is irrelevant.

I think the “rareness” of the cards determines the likelihood of them dropping in a programming sense, but the overall numbers of each category skewers the the odds in a sense.

And also it determines the value in terms of scrap, which is probably more important.

Also just to add that the “rare” cards have most likely been padded out over time as more and more of the weapon cards from the time limited feature packs have become craftable. The majority of them are broken down into 14 weapon skins, with 5 being Epic and 9 being Rare (with non, aside from the Weapon Collector ones) being Common.

I don’t think I’ll ever understand why they decided to call those skins sugar when they looked cracked.

Good eyes, I never noticed that.