"Back due to popular demand"!

That’s where they must all be.

But Mac isn’t in Horde. Or yet.

Does the Mac variant have different VO. I doubt it, I have always thought this is the way to go, and sorry but I have banged on about it on here for several years.

As for his get up he looks like he should be an Avatar in Farming simulator 19 of be on Emmerdale Farm.
He is an awful choice for the first/one of the first characters.

Just how bloody minded are TC staff. Why not kick off with a legacy character we never got in 4, you know build on the excitement not kill is stone dead with C-U-Jimmy

Does the Mac variant have different VO. I doubt it, I have always thought this is the way to go, and sorry but I have banged on about it on here for several years.

Seems a bit complicated to do this(from my perspective, as variants are not a character of their own, or at least I would think they are treated as such in code, but it could also not be difficult), but I could see this making sense for certain variants, eg Kait’s Gears 4 variant(or possibly even her Act 1 variant from Gears 5) would have different dialogue/behavior than her post-Act 1 Gears 5 variants when she has spent several months in the COG and you can notice the influence the military has had on her. Or not having dialogue of an older character mixed in with lines from when that character was younger which would sound odd(I believe this was the case for Anya in Gears 4). But I reckon that for purposes of simplicity, the dialogue is just generalized(generalised for any Brits out there) across all variants.

Though they’ve already made improvements to the general dialogue for the game overall for characters, so that’s something at least(still think Campaign dialogue is better than anything they’ve done in Horde or Versus and would want that in at least Horde, but that’s a different matter).

I wouldn’t be surprised to see it happen

Even BChaps on Twitter is roasting the hell out of TC about this skin that is “back due to popular demand” and of course they do not respond back to his tweet either. They really are digging themselves deeper into their own grave.

I really don’t get why did they even bother with that line, like admit y’all tryna see if ppl will buy him for 1000 iron cuz no one got him for 1500 so y’all wanna see if it’s the price or the character…

I truly hope they’ll see the light soon, same as it was with UIR packs at first, and esport “take my soul” RNG setting they had on Packs 1-4 until it changed for the “better”

I didn’t even know he was in the store to begin with, let alone coming back due to popular demand. I will add though, the people that complained about the credits and RNG have brought this upon everyone. This whole system is by far worse than the credit system. Let them grind and grind for iron or pay for it for garbage skins. I won’t be buying iron at all unless they bring back Griffin and that’s it.

No wonder, character is so dull it’s no surprise you scrolled over him in the menu

And with Gears 6 it’ll all happen again.

They’re just testing the waters to see how far they can go each time. And that’s what really annoys me the most: it all happened before in a similar fashion.

One thing might be the lesser evil here (in hindsight because it was a horrible system as well) but everyone who complained about it was right: it was an unfair and predatory system. Only after a long time and many, many, many complaints they started changing it bit by bit, which is what ultimately resulted in something decent towards the end of the game’s lifecycle (being able to just craft every character, better rollouts in packs and etc.).

Whoever the hell claimed that Delivery Driver Mac is popular in any form is lying. Just say you don’t have more ■■■■ ready instead, at least then we could respect you a little

All I want is a nude Anya and I’m good to go.

They can keep this other crap.

Guess I’ll repost this photoshop I made again since it took them a year and a half to add it to Gears of War 4.

(just the one on the right) 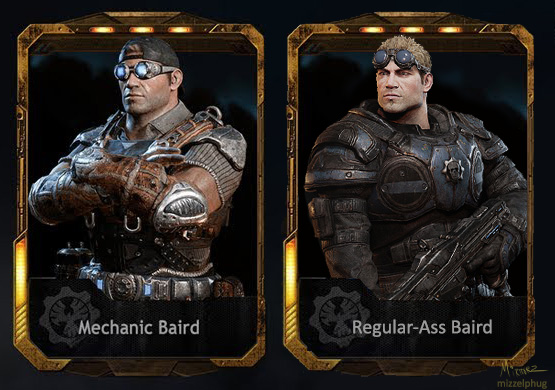 Just imagine the TC Programmers , making the original game of Contra for the NES, I have realized that it would have been an utterly mess compared to the Contra that was made by Konami, It wouldnt be considered the benchmark for all games.

Baird has been my main since GOW 1. I just want the classic one. Not the bald GOW 4 one or the Adam Fenix reskin lab coat one. I will take any Baird with hair. Even give me young Judgment Baird.

TC is just good at being bad …

All I want is a nude Anya and I’m good to go.

This, also add Sam in a bikini (the sad part is they would fit in just like the ridiculous characters we usually get