Are you in favor of less detailed gore in the Gears of War series?

I noticed nobody really cares that gore is less detailed instead of more detailed 5 installments in. I’m talking about actual detail to the gore, not amount. Also they’ve used the same dismemberment system since the beginning. The half torso chunk is the same whether you chainsaw or shotgun someone. What about a headshot that shoots half the head off? Or an easier thing to implement is that grenades don’t completely blow you up depending on how close you are to it. Maybe it takes off an arm instead. There are so many options, so much more variety you can add to the game that would make it feel more immersive. At this point it just feels like regurgitated clutter. Except there are no organs/bones in Gears 5 for some reason. I miss the grit Gears used to have.

I noticed nobody really cares that gore is less detailed instead of more detailed 5 installments in.

I’m fine with the gore as it is. Don’t want Gears turning into Mortal Kombat…

Considering the largely negative reception to that poll, you’ve got your answer. Again. It’s enough as is, which doesn’t really need to be a whole lot since the gameplay moves at a pretty fast pace.

That, and having to run 60FPS on old hardware requires things to not be able to look as pretty.

Go back and study the gore in Gears 1, 2, and 3. Then watch this video that critiques the pros and cons of Gears Ultimate’s gore.

Then go play Gears 4, and look at all the gameplay footage of Gears 5.

You’ll find that each game has had progressively more and more detailed gore models. Instead of each character breaking into exactly the same chunks no matter what kills them, there are more parts, better soft body physics, and more blood coating the intestines. Plus, the broken bones are still visible inside each body, but now they’re covered in blood instead of being clean.

I know reading isn’t your strong suit based on our previous conversation, but look at the poll again. Everyone’s saying they DON’T want less detailed gore. Also tons of YouTube comments on the executions say the same thing.

@Wisdom_Thumbs I’m too lazy to debate this so I’ll just screenshot this comment chain in response to a similar video: 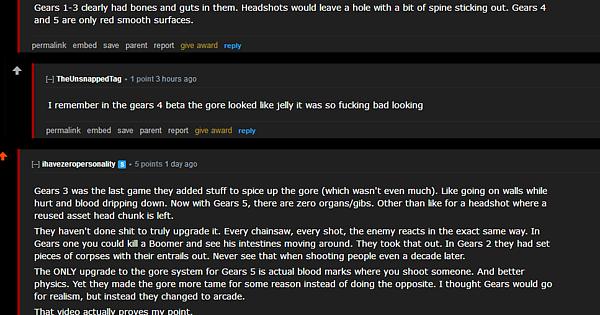 Gears 5 Test Tech gore seemed fine with me. I didnt really notice too much of a difference to be honest.

And that’s the issue. There is no difference. Other than small regressions like getting rid of organs/bones. To which people who have no idea how the human body works respond with “they’re there just covered in blood!” The point I’m making is that we’re 5 installments in and they should’ve put more focus on updating the visual feedback when you kill someone seeing as it’s the core identity of the game.

I mean ■■■■ at least make the chainsaw gore look different from a shotgun blast to the chest. I’m tired of seeing the same torso gib asset in every single game.

It would have been a cool addition, but personally I dont think its that important.

Yeah you’re making a bigger deal out of this than need be it’s a non issue.

Just because it’s not an issue to you doesn’t mean it isn’t for others.

Lmao this guy’s like wtf whenever he kills someone. https://www.youtube.com/watch?v=rsXJ3EhziJM

Yeah…but look at this thread. 90% disagree with you or don’t care. So…it’s till a non issue.

And a non issue doesn’t mean you can’t have an issue with it, it just means you shouldn’t make a big deal over it.

I don’t really see many people complaining about the gore being less detailed either. And this isn’t a game breaking issue but merely a cosmetic issue, so to speak. Just like female characters in MP having oversized male hands is.

Which does not mean it is something that should be ignored. I’m fine with how the gore is in 4(and 5, according to posts). The way it was in 2 or 3 didn’t really appeal to me much, but then again I’m not really a fan of seeing the inside of a body out. If they were to make everyone happy they could just give the option to keep the gore “realistic” like some want it, reduced(like it is now), or just off completely. But I don’t see this being the case for 5 with just a month left until release.

They won’t change Gears 5. This is more about games going forward. If no one talks about it, I feel like it’s just going to be the same thing in the “next gen” Gears game.

@Gym_Meathead There’s a link in the OP. It’s just an easy way to do a survey.

I’d enjoy more detailed gore especially if it was on the level of previous gears. I want to see those intestines when I gib someone in half. haha

The gore is awful I agree. Shooting someone point blank with a shotgun only for them to be cut in half or the same body parts gib is very boring. I also miss the skulls or head fragments from past games that seem to be missing from 4 and now 5. Why is everyone okay with downgrades?

Well, alright. I don’t disagree here, I do think the gore should be more detailed, but in more ways than just showing bones or organs(my eyes could be deceiving me but I see neither in Gears 4). Things like, explosives not actually leaving big chunks of corpses around when they explode near someone or on a direct hit or showing different kinds of damage depending on how far the explosion was from someone. A frag that doesn’t tear a body to pieces would likely leave shrapnel in the body. Or at least only take part of it off.

Or not making bodies feel like jelly so much, and making them fall apart in nearly the exact same way every time. Can a chainsaw really completely cut a body’s flesh, bones and muscle clean in half, especially when there’s armor above that body? Or can a pistol like the Boltok or a rifle for that matter completely tear a body in half, with just one shot or multiple, if at all(not speaking for limbs here, but it also seems unlikely a regular pistol or rifle could tear them off)?