Any tips on the gnasher please?

This is a question that I’m embarrassed to ask and will no doubt be laughed at for, however, it’s gotten to that stage.

Since the update I’ve been struggling greatly with the gnasher. I can’t even get closed to being used to it.

Can anyone explain the differences since the update? I’ve read through the release from TC and still can’t understand it.

I played Gears 1 and 2 religiously when released they were both released and was a very good player before having to give up gaming for various reasons. Since starting back with Gears 5 it took me a while to get used to it again and was finally starting to play well and go up through the rankings from bronze to gold 3/onyx 1.

Now I’m finishing bottom in about 95% of games with a really bad kill to death ratio.

As I say, I’m embarrassed to ask this question, but it’s gotten so bad that I’m hating a game I love so much.

Any help would be much appreciated.

I don’t find this question embarrassing at all. Did you play before the most recent update? Did you struggle then? I would say the the only way to improve with the gnasher is to understand the true range of gib and every pellet landed matters.

Playing in a private match with bots to understand the true distance of a gib or 2 shot will be beneficial. The most recent update didn’t provide any numbers for players to adjust to other than it was changed.

The game is getting a tweak perhaps this week for more tuning, so we will see what comes of that as well. Just keep at it and realize it’s not just you having issues.

As of right now I’m using the lancer more but with the Gnasher I try to hold my shot and let the other shoot first. Get within Gib range it seems like one pixel makes all the difference between somewhere in the 80’s and a Gib. But TC should be doing a weapon tuning this week hopefully it addresses the issues. Certain aspects of movement speed has been reduced. So that’s why getting away from shots are a bit more difficult.

Same i cant get kills with gnasher its near impossible

It’s nearly impossible to truely get a handle on the gun as it plays differently match to match.
What works for an hour might suddenly stop working for the rest of the night.
The lower your ping the more you have to accept that it won’t kill when you want it to and plan for extra shots/to disengage often.

More seriously : Try offline with bots to get used to what it is supposed to feel like. Test out gib ranges etc. Sit on the same corner over and over getting gibs, downs until you have the right feel for the range.

I don’t think you’re the only one. The gnasher has been a womp for awhile in my opinion. I know that your internet connection plays a huge role in it as well. I have screen grabs showing me shoot first and die then on the kill cam it shows I never fired.

addtional on the below from the talented community. watch the gansher vids. undertand the blind fire pop shot and target shot. they all have roles.

make sure port forawding is on as well.

lastley look at your controller settings lots of vids on that.

I was very good before OP3. I can’t read the gnasher from match to match at all anymore. Whatever it is, it isn’t me and it’s most likely not you either.

Screw anyone that laughs at you. You are trying to get better at the game and thats a good thing

I played since Gears 5 was released in the UK. Before the most recent update, I was finding the game fun and was playing well. Rarely would I finish bottom. It’s like a new game now in some ways. There’s something missing in my game now, I just can’t seem to figure it out.

There’s players still getting 20+ kills, so could just be a case of getting used to the changes?

The inconsistency is really frustrating. In one game today, playing Canals, opponent was behind cover, I ran up and missed my shot and hit the wall, yet my opponent was killed.

@presc1ence I definitely feel it plays definitely match to match. Even within the a single match.

I’ll try the offline bots session and see how that goes.

Thank you all. Much appreciated

LT and backpedal it should keep you afloat.

Don’t play VS if you want to hit with the shotgun, just play Horde or Escape

If you have dial up internet it certainly helps

My advice: disconnect your ethernet cable from xbox/PC. Create a wireless access point on your cell phone. Connect your xbox/PC to the wifi network created by access point.

With a wifi access point on your end, yes…

You have to play for pop shots the hip fire is trash now, only fire up close. Try to get the first shot you will more than likely win. Don’t shoot random shots they should all be timed well placed.

Always shoot while strafing/walking, don’t wall bounce or roadie strafe unless you’re running away, your shots would most likely miss and youll die.

Learn the gib range and bait the player

So this is what said in a different thread:

Can anyone show me how to play this game

So here are some examples of my gameplay. Hug cover, quick hipfire spins, lots of flanking, switching weapons when necessary, and popshots. 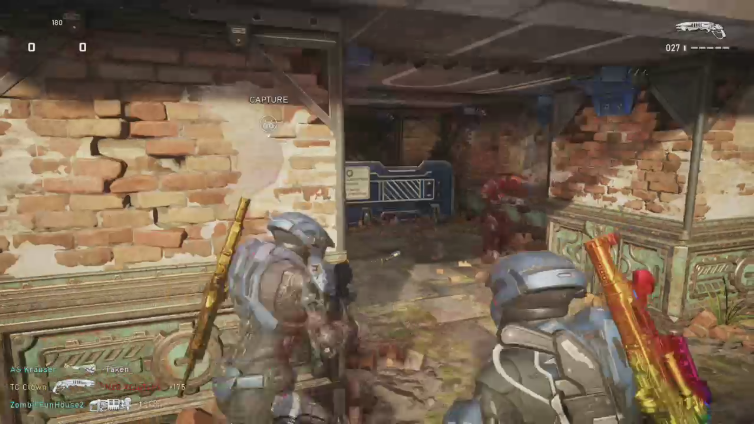 Be aggressive around corners. It is easier to attack than defend.

Right before you hit the corner while sliding, pull your trigger.

In 1v1s, walk backwards as you are shooting in a Gnasher fight (S/O to @III_EnVii_III)

When hipfiring, aim with your character’s elbow (S/O to @ll_R_E_D_l)

Do not pull your trigger too soon. This is oftentimes where you’ll get the “83%” hit markers. You fire too soon, your enemy takes a step closer, and gibs you.

Be patient. Don’t needlessly rush into fights that you know you can’t win.

Flank as much as possible.

Snub is a better secondary than lancer

Can anyone show me how to play this game

When hipfiring, aim with your character’s elbow (S/O to @ll_R_E_D_l)

I aim with my character’s codpiece.

Right on! I couldn’t agree more.