If you Build Barriers and hold a torque Bow with serrated edge. The barriers will bleed.

I don’t care I’m a party pooper. Get this garbage patched TC.

When’d you find out about this?

At this point I wouldn’t be surprised if this sort of exploit existed for Kait or the SB Mulcher causing barrier bleed while using Lizzie still works.

Fair enough. I tend to not use that much.

It feels like once they get rid of one barrier bleed glitch another one pops up. 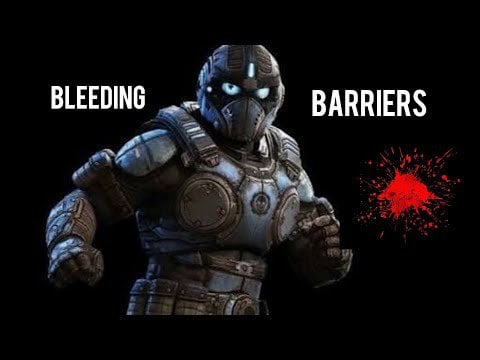 I can’t stand that skin.

I didn’t either in Gears 3 but liked it better in 5.

Holy moly! So many bugs, glitches, exploits. Oh my!!

Edit: ■■■■ is garbage. Nevertheless get it patched

Just as long as you haven’t gotten him up to level 19 or 20. Remember TC says not to play that character

Assuming it’s you on Gears, we can do things afterwards.

Smh this is going to be a constant cycle for the lifetime of the game isn’t it?

Lizzie causes stun with barriers while holding the Dropshot, barriers will bleed if there’s enemies in them and Lizzie is in the Silverback while using the Mulcher. However it does not seem like they give stim. Not sure about freezing either.

Nothing happens when Kait builds a barrier and enemies are in it while holding a shotgun.

I’m afraid this is tied into something coded deeply into the foundation of the game. This is why it keeps cropping up: the fact that the game is coded to register the damage type as whatever type of weapon the character who is doing the damage happens to be holding at the point the damage is registered. This is why you have barrier bleed glitches and Clay’s latent healing effect, and Matriarch-melting incendiaries, among others. It must be very deeply embedded in the code. This is why it keeps resurfacing with each new update. Every time it gets “patched” they really only put a band-aid on it rather, never dealing with the foundational problem causing it.

Strangely enough we never had such issues with any of the launch or Op 1 characters. Bleed barrier glitches and the like only started appearing with Baird in Op 2 afaik.

I don’t know everything, but possibly the post-op 1 characters were built missing a piece of code, object, or logic that was built into the Op 1 characters.

So Paduk’s bleeding should be back as well I assume.

What about Grace? Maybe even Baird?

It didn’t seem to be working with Grace. Someone in-game reported that their Lizzie Barriers weren’t stunning.

I just tested it. Juvies and Imagos on Overload in barriers were getting stunned while I held the Dropshot with Hammer equipped.

So unless TC rushed out a server side fix already, which I doubt, it should be working.

Maybe they were wrong then, and didn’t test properly.