Advice for improving my multiplayer skills

I have always shyed away from online play but since the release of gears4 I have been adapting to it. I am looking for any advice on how to better my skills. Obviously practice is key but if there is anything you can think of that might help I would love to hear it. A big problem I have is speed. I cant seem to move as quickly and effectively as other players. What can I do about that? Thank you in advance for any info, looking forward to your feedback.

you have to learn how to wall bounce

they have videos on youtube for it to show you how

Personally I find Clutch Chris/ModdedTalent’s videos the most useful…

If you are concerned about not being able to bounce around as well as others I would recommend you watch this one, to set up the context for movement :

If you are just starting up and think this is all about the gnasher, I encourage you to watch this one:

Beyond that, best gnasher video tutorial I found:

For movement tutorials check out DutchLive’s videos on youtube.

Just keep in mind, as Chris says, you can do well, even very well, in this game, without crazy movement… That is an advanced topic and trying to focus on that is likely to cause you to become frustrated, since it takes a lot of practise and patience to master it AND apply it effectively in combat …

Personally I’d like to say don’t fall into the “Gnasher only” playstyle, yeah it’s “the” weapon but get a custom to using Lancer when needed, utilise Smoke nades where ever possible and most importantly fun = winning no other online shooter will test your resolve as much as Gears does.

Awesome thanks everybody. I have been playing gears since the beginning so when I started my first online match I was pretty confident in my abilities. Then I found out that AI and live play are two vastly different beasts lol. I will check out the mentioned vids and keep fighting the good fight,maybe someday we will get to shoot at each other. thanks again!

Look at your sensitivity settings. Default is way too slow. Start turning up your settings a little at a time. For fun you could max them initially, but you’ll feel out of control till you adjust.

Total honesty I have been playing gears on default sensitivity since day one. I honestly dont know how I didnt think about that. Kind of baffled with myself right now. Anyway it should be said that I am very well versed in the game’s functionality. To start it kills me that most players tend to play “gnasher fight” whilst looking past nearly every other weapon. I have always acceled with my lancer. I am not the best with wall bouncing but I could be worse. I suppose the biggest issue all around (aside from my sensitivity being set to default) is finding the right balance between fast paced cqc and long range combat. Granted that isnt always a choice we are given on the battle field when captain shotgun pops up directly behind you. Anyway now I have a pretty damn decent place to start thanks to you all, I just need to get home and play! Thanks again

Hide behind a piece of wood. Shoot around it. Always go for shooting players in the back. That covers 95% of players.

@RevengeOfCrows
Don’t pay any attention to the advice you have been given this far, Duff will sort you out in 5 easy steps.
1: Teabag, teabag and thrice teabag
2: Send abusive messages calling your oppositions lineage into question.
3: Receive abusive massages calling your lineage into question.
4: Ensure you have a ping of 200+
5: Blame every loss or failed Gnasher dance off on the connection, even better if you can work the word Mexican into your blamegame.

Have fun, see you in the battlefield

I would HIGHLY RECOMMEND you check out Dutchonidas youtube channel. IMO he has THE BEST tutorial because not only does he explain it well, but he actually takes the time to edit and slow down the video to show you step by step what he is talking about.

I’ve watched channels by pros like Domez and honestly they dont help because they just TELL you what to do while demonstrating it in real-time. They dont bother to edit and slow down their footage, which is what people need to see when looking up tutorial videos on how to wallbounce, etc. Also, many of these other channels might have a “hand cam” to “show” the inputs they are making to bounce the way they do, but it doesnt help one bit because they’ll hold it upside down relative to your view or at a crappy angle, etc. Dutchonidas actually has videos that includes an on-screen digital controller that mimics every input that he makes on his own controller so that you can see it right-side up and without hands obscuring your view. I have never seen any other tutorial video include such an awesome feature.

Seriously, check his channel out!

Lol I was going to say DutchyLive does the same thing, then I realized that’s who you were talking about, under a slightly different name

Yeah, unfortunately he decided to change his name to that. So to make it easy for those unfamiliar with him, I decided to reference his new channel name.

I came a long way in a very short time and these things worked for me;

-Observation. Eagerly engage higher level players, notice how and why you are getting killed, and learn the techniques that were used against you. Make clips and play them back. Watch videos of pros to study the game mechanics.

-Relax. Tension will cause you to fail because gears requires a lot of finger dexterity. I play my best when I decide to go for clips because I’m no longer tense, I’m just having fun.

-Practice moves in private lobbies. Fill a KOTH lobby with bots on a 5 sec respawn so you can work on your up-As, wallbounce, whatever it is you’re learning to do. This takes away the tension of live play and focus on getting your muscle memory developed for each move.

I play my best when I decide to go for clips…

What does this even mean?

“Going for clips” means going after montage worthy plays. One of the my favorite things to do in this game is make clips of either smart strategic plays or outplays with beautiful movement.

It’s funny when I look back at clips from the past year, I can tell when each of them was made based on the movement.

I’m going to get A LOT of hate for this, but here goes.

Gnasher and movement isn’t everything in this game. If anything, way too many players put too much emphasis on this gun, and it makes them easy to read and kill.

My primary weapon is the Enforcer. I have over a thousand hours played, and even top tier diamond players in ranked continue to rush me from absurd distances with their shotty out only to be sat down in 1 second and die.

Now OF COURSE the ultimate gears player is going to be good with every weapon and use it when the situation calls for it, but I’m telling you right now, you need to get yourself in the mindset of knowing when shotty is your best cause of action, and when hitting from a distance is. When I see two players both surrender their area advantage just so they can ‘roll the dice’ and see who’s better with the gnasher, I face-palm…

Another great tip is to look at your KDR in your war journal with individual weapons… Bet your KDR with the gnasher is less than say, with your Lancer… That’s because Lancer is safe, along with 90% of the other weapons. When you watch pros play, they aren’t eager to run in and make themselves vulnerable with the shotgun. Don’t put yourself in that position on purpose. Get good with the shotty so you’re not helpless when you’re FORCED into that situation, but don’t think it’s the only way to play.

(Screenshot of my current stats as I’m sure plenty of people probably think I’m trash for recommending such things.)

And here’s a great vid that talks about what I just said… Use your enemies play-style against them… 90% of players DO put too much emphasis on the shotty… Read them, predict them, exploit them. 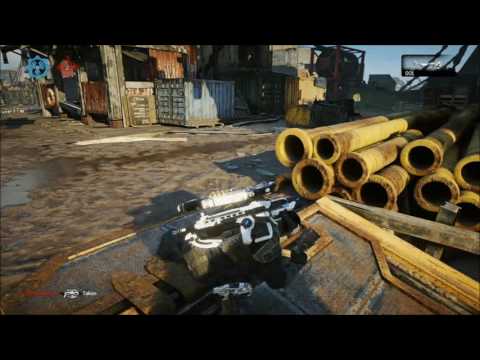 PS: Me0wMix CatFood probably has the worst advice here saying he plays best when going for montage worthy clips. You know what that translates into? “I play best when putting myself in bad situations but overcoming the odds.”… I’m telling you for your own sake, don’t do this. Of course there is always a time and place to practice your shotty in social and attempting to overcome big odds… but don’t let this be your permanent play-style, or you will find somebody like me, and you will lose, I almost guarantee it.

Olah! Firstly playing in a team with communication can serverly help but after reading I’m not so sure if that’s you, I mainly play by myself on ranked and do not so bad most times, you can learn a lot in there, but put your settings up slowly every few hours by one or two so your brain doesn’t see the durastic change if you where to just max it out straight away you would be like wow this is so quick and when you get it maxed learn how to put A in with most of your shooting movements and learn when the best time to hard aim to blind fire there’s moments you can tell straight away when you can’t blind fire for example if your behind cover and the opener has the right advantage and your coming in from the left to right if that makes sense the opposite way for me blind fire is good most times
But in reality buy good internet lol

I actually took your advise and ran a few games only with enforcer. The gun is just hilarious and makes people so mad, because they can’t blindly charge you and hope they eat the first shot