Extracting a new feature from a bug posted in the Dailies thread that @RumblyMonkey991 and @CommanderCH2863 encountered:

You know this is what basically happened once when we did a horde challenge run as Promos only. @CommanderCH2863 do you remember when we spawned inside the rooms on Atrium?

That’s a heck of a new mashup mode for Horde + Escape… “1-2 players have to survive long enough/x rounds by themselves for a door to open and free one of the remaining random teammates.” (Obviously it could never work because no one would want to be one of the locked-in players, unless it was something slightly more like The Trap hive, and not just a tiny cell with nothing to do.)

Maybe they could operate a remote stationary small turret from inside the room? So they could at least shoot even if the turret wouldn’t really do much damage, but better than nothing. Maybe the turrets could do different types of damage or something depending on what the player has equipped.

Would also allow the opportunity for TC to invent more skill cards or something to upgrade.

I started thinking maybe it’s more like a subset of players start as Stranded, holed up in isolated forts/towers. They have turrets (or maybe even Hammers of Dawn) but are facing eventually insurmountable odds like Starship Troopers, GoW 3 Act III Anvil Gate defense, or what @o_F_3_R_R_3_T_o similarly envisioned for a map. The rest of the players are a COG squad that fights to reach and then reinforce them.

So a little bit of Escape movement, but also Horde & Overrun…

Interesting? Unplayable? Improve upon the concept.

I truly dont think Escape will return in the next game (for many reasons) but i would love if it did, or even a variation of it like in your post.

The whole mechanic of having a trapped teammate could be bypassed by just playing by yourself.

The whole mechanic of having a trapped teammate could be bypassed by just playing by yourself.

It could create problems if releasing that team mate has to be done by another player and if that player dies or quits.

I had a Dungeon Crawler mode idea a while back.

Basically small maps are randomly generated using Escape tiles. A team of 5 players spawns and has a few objectives to complete. Some objectives may involve a fabricator and limited power to build. Once the objectives are done two or more doors open whih lead to the next mini map. You as a team choose which path to take. And it continues until you reach the end.

stuck in a wall?? 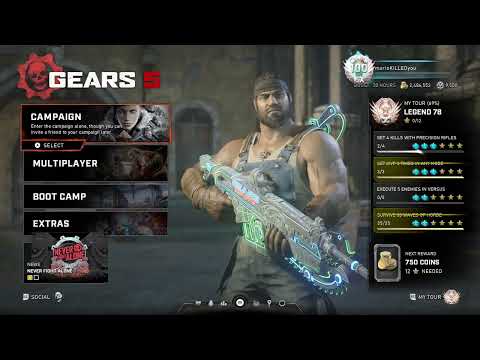 It could create problems if releasing that team mate has to be done by another player and if that player dies or quits.

What? You don’t have confidence the AI Soldier could take over the task competently for a quitter?

(Not to diminish the difficulty in programming AI, but IMO the single biggest problem with the Gears 5 AI today is the entirely self-inflicted decision to have higher difficulties increase the artificial delay between someone going DBNO before the AI switches to trying to revive them. It’s infuriating that you sit at their feet for those 7 or whatever seconds on Master. It’s a cheap tactic for inflating difficulty like sponginess.)

Being solely at the mercy of others is a real concern, though. It’s partly why I morphed to a Stranded setting and envisioned a COG squad on the outside: so it would take more than just one person failing/griefing to subvert the rescue aspect. And maybe there can still be a “win” or “round end” condition even if no one is left outside the outposts, like eventually the Horde is depleted and then you could go outside to de-pod/get tags?

You as a team choose which path to take. And it continues until you reach the end.

If the sections are randomly generated, is there still a knowable tradeoff for making any particular path choice (like The Detour hive or whatever) to influence the upcoming objectives/weapons/enemies?

I’m all in favor of having randomized PvE maps. I prefer intentionally designed maps and appreciate their artistry, but if we don’t get an editor/the ability for user-generated content, then at least supplementing understandably limited official content with something that can provide randomized variety is a good alternative.

I dunno. I guess it depends on how sophisticated the RNG map generator is. I’d want there to be an indicator beyond Door A or Door B.

It could be that the RNG maps are limited to a finite number of preset maps.

It could also be based on mutators which could change.

Or it could be based on objectives.

Or it could be based on rewards which are accrued as you progress. So your first map gives everyone say, 4 skill cards; but after this you have a choice between a route that gives CXP; or 1 legendary card instead.