9 Hours left of Pahanu Daily which begs the question

How do I engineer Pahanu? I’m being serious. Perhaps I suck but whenever I try and put down any barriers they either become invalid or very tiny. I feel like Del, Health Build and Decoy would be better than any standard Baird setup.

I don’t mind Pahanu as a DPS but its just not fun as an engineer from my experience. For people who say its “difficult” sure I’ll let you have that one. Most big maps are difficult for horde
Pahanu
Ephyra
Regency
Speyer

All painful Engi maps for me atleast.

How do I engineer Pahanu

I fence spam in between trees and rocks away from the base by a distance. I just want to slow lanes down enough to let them kill them. I find the games I lose are the ones where the engi tries to close off the end of a map far too close to where you have set up. They bottle neck up right on top of you. All you really want to do is string them out.

I actually like shock sentries on this map for that reason too.

How do I engineer Pahanu? 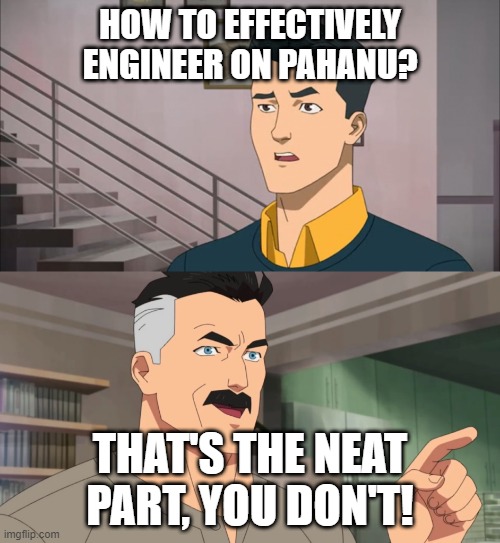 I fence spam in between trees and rocks away from the base by a distance.

this was a method I was taking earlier. The lobby I was engineering in thought it would be wise to upgrade my barriers though instead of depositing so I could use the money more efficiently lol I don’t care if you don’t deposit, I’ll be fine but don’t upgrade stuff especially if im building on this hellhole of a map.

I find the games I lose are the ones where the engi tries to close off the end of a map far too close to where you have set up. They bottle neck up right on top of you.

I think this is because people generally don’t know how to play this map. I’m no better but its a rule of thumb to NOT build inside the base immediately. I understand its easier to place things down in that safety area but your teammate benefits way more from fortifications placed further out.

this is the second meme I’ve seen with this preset and I love it.

Play in The Spawn：

Do you have a Pahanu Map？

I’ll show you how I place the Barriers safely.

I abandoned it yesterday after various teams.
Kept ending up with that high level person who couldn’t play their class.
Final wipe was on wave 12.
Me and the Slugger (I was protector) both had over 1m damage.
Combat Medic (my OH) had 750k.
The Marksman (level 16) 340k
Gunner (level 19)… 220k damage.

I tried the Pahanu daily 3 or 4 times the other day with randoms. Best run we had we were cruising along until wave 10. Then it all fell apart and we got wiped. It’s a tough map. It’s so open. So you have to deal with attacks from 3 sides. Our engineer did a good job though. I was playing my level 19 Veteran which was able to wipe most or at least a good chunk of a wave with my Ultimate. Problem is we didnt have a boss killer or someone who could deal massive damage to Scions or Guardians while my ultimate was recharging.

This is what I’ll set my Barriers in the Spawn Setting.

Mostly, it’s very Safe. For more, you can push more to the Base.

Most of the Engineer don’t know how to place Barriers far more especially when you’re playing Big Map.

You need to Identify what Type of Barriers Placing is Suitable for that kind of Certain Position either it’s in Portrait / Landscape.

With that Kind of Good Setting, Marksman can really Dominate this Map easily.

How do I engineer Pahanu?

One of the biggest problems with Pahanu is its sheer size, so you have to adopt a slightly different approach than on smaller maps where vertical level 1 barriers are often the most effective option.

I used to set up either where you spawn in or the opposite side and whilst those areas are narrower and therefore require fewer barriers and are thus easier to defend it’s virtually impossible to retain any of the taps that spawn either on the left or right. So I changed my approach and have had a lot more success at setting up on the left or right of where you spawn in depending on where the first tap spawns. But now you’ve got a bigger problem of a very wide area in front of you and to the left and right to defend.

So I adopted a slightly hybrid approach to barriers. I used vertical level 1 barriers close in to the base but horizontal level 2 barriers further out across the width of the map and layered if I had enough power—in other words two level 2 barriers one further out than the other. So now the enemies have three sets of barriers to get through before they get to you and doing it in this way allows you to capture and retain most if not all the taps that spawn on your side.

I’ve done Pahanu twice now on Master 1-50 horde using this system and both times were successful. It’s a simple concept—push them back as far away from the base as possible and kill them before they get to you.

I agree. A good Marksman (or even two, one left one right) are key to beating Pahanu.

All painful Engi maps for me atleast.

I used to think that until I figured out how to engineer them and the principle is exactly the same for all of them, particularly Ephyra, Regency and Speyer.

Left, centre, right, push them back with barriers until you control your half of the map.

1st thing is to not us mechanic, use robotic expert.

Sit back and snipe with torque bow, embar and longshot. Only use repair tool to reload entries ( if u choose to use them). Only use lvl 1 barriers to slow enmy down and lasers at base to be final stop. 1 kill with precision will repair a lvl 1 barrier. Embar a leech and all barriers on map full health. U repair with ur gun, ul be surprised how much money it saves not using ur repair tool. If u got style, u swap ur repair tool for Boltok. FYI you have 35% bleed with torque bow…

Thanks for the tips.
I hate Pahanu and tried to engineer last night as Mechanic. We got to wave 12 and then got wiped unfortunately. I’ll try RE next time.

Btw we had lvl 5 Anchor and he was MVP almost every wave unlike another Anchor who was lvl 20.
So much for maxed classes…

He was in my party

He’s a new player. Mostly played PvP.
He asked for help to level up his classes. We did the Lab and his Anchor went from lvl 1 to 5. After that we decided to do Horde.

I think most PvP players who decide to play pve are very good Marksmen, Anchors and melee like BM and Protector. But it’s just imho

Maps like Pahanu makes me wonder if TC test their maps for both Versus and Horde. I also wish I mastered it before Locust & Lambent were added in.