On very rare occasions, I see a double kill with one gnasher blast. It’s happened to me once in late 2016. I’m uploading the video for discussion purposes. https://xboxdvr.com/gamer/shiddick/video/60433775#t=4

I’m posting because I saw my teammate do it this last week and want to discuss what factors are necessary for this to happen? Have you ever killed two with one gnasher shot? How does this compare to previous Gears games? I do remember this happening frequently with the G3ars sawed-off but I can’t recall this being very frequent in any previous entry.

Also the teammate that I saw do this had one of his targets rolling back having just been revived. Similar to the video above. As far as raritys go, I think this is the best one.

Yeah that happened to me just earlier today for the first time. It was only against Bots though when I was helping a friend finish up his Weapon Mastery achievements, so wasn’t as impressive as against humans, but still it was a first for me.

I pull this off every once in a blue. I think you need 1 guy at around 98-99% damage and the other maybe hurt a little I used to do it in gears UE too

You have 10 pellets in a spread. It takes 8 pellets to kill someone at gib range. If you have two people somewhat weak (let’s say 50% health), then you could shoot a spread at two people close together within gib range and get them both. Say 4 pellets hit one, 6 pellets hit the other, then you did enough damage to gib them both.

Can slow down the video to see where the pellets went: 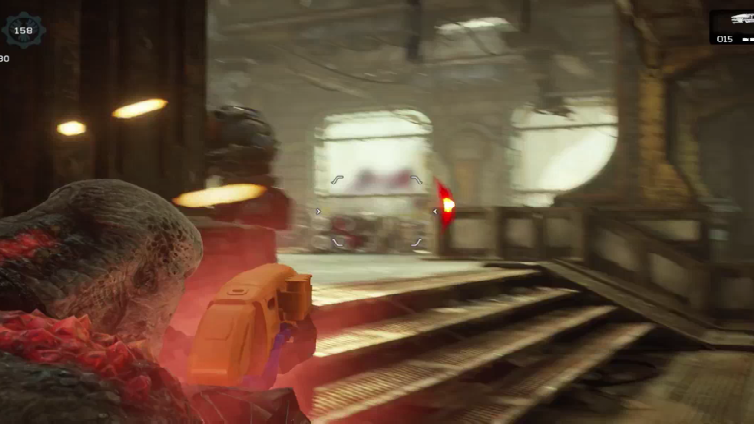 It’s no mystery. The gun has a spread. Get two enemies hurt and it doesn’t take much to kill them.
You’re right though. It doesn’t happen often.

I was trying to be nice because I thought it seemed rather obvious. But, since you decided to be rude I’ll just be blunt.

“Other games” are entirely irrelevant here as this is it’s own game with it’s own tuning. Shoot a wall. See those pellets? Damage is calculated by the number landed and distance. Pellets that miss are still live and may hit any number of things, including… another opponent.

Managed it a couple of times, but that’s about it, very hard to set up.

I’ve done this as well.
I’ve only had it happen on Gears 3 Versus once with Gnasher where I headshot one guy and other was gibbed.
What was strange was that both players weren’t next to each other but in a line, one behind the other.
It happened on the stairs of Aftermath but could be possible it looked spread if one was slightly higher elevated on stairs.
It is a very rare moment for one Gnasher shot, two kills.

I’ve done it a couple times, and been a victim of it once.